Jets do a flyover at the new NATO headquarters handover ceremony during last year's meeting of NATO heads of state and government in Brussels. Next week, heads of state will again gather in Brussels for a major summit. (Courtesy of NATO)

Jets do a flyover at the new NATO headquarters handover ceremony during last year's meeting of NATO heads of state and government in Brussels. Next week, heads of state will again gather in Brussels for a major summit. (Courtesy of NATO) 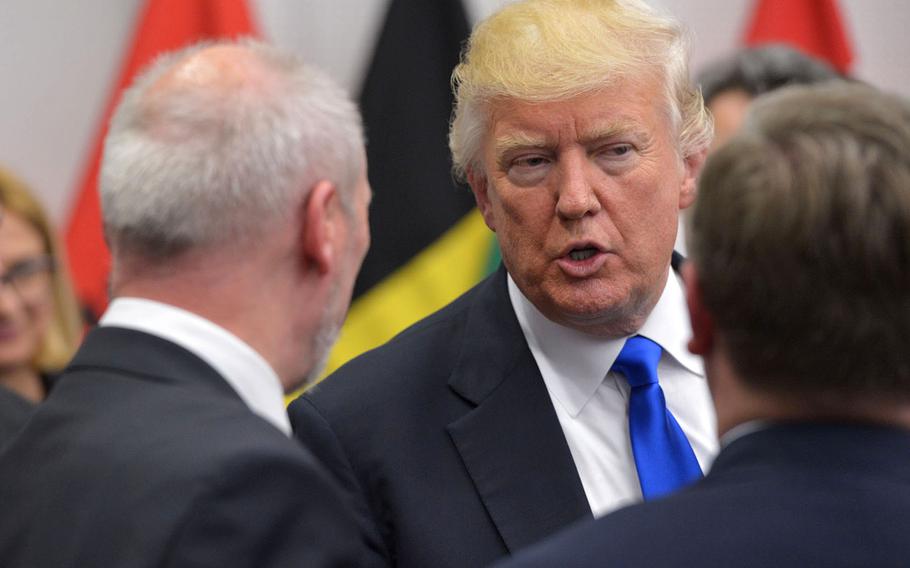 Similar to Trump, prior U.S. administrations have called on NATO members to spend more on defense. But Trump’s personal criticisms of heads of state and his willingness to link security matters to trade have the trans-Atlantic alliance on edge like never before in its 70-year history.

“The alliance is at a moment of high tension ... something is new and dangerous,” said retired U.S. Adm. Jim Stavridis, who served for four years as NATO’s supreme allied commander in Europe, in an interview with Stars and Stripes. “What is different now is the obvious antipathy, which feels deeply personal, on the part of the U.S. president toward the alliance in general and some of the key leaders in particular.”

Unlike past feuds — the 2003 Iraq War, for example — this battle isn’t about a particular action. For the first time, the tensions center on the U.S. president’s overt disdain for NATO as an institution and countries such as Germany that form the alliance’s core.

Trump’s biggest complaint is that much of the 29-nation alliance isn’t doing enough to increase defense spending to 2 percent of gross domestic product, as agreed upon in 2014. Although Germany agreed to hike defense spending 80 percent by 2025, that would equal about 1.5 percent of its GDP.

“The United States continues to devote more resources to the defense of Europe when the Continent’s economy, including Germany’s, are doing well and security challenges abound. This is no longer sustainable for us,” Trump wrote to Chancellor Angela Merkel of Germany last month, according to a New York Times report.

However, there is little domestic interest in pouring funds into the German military and politicians who advocate it risk being seen as a lackey of Trump, who is deeply unpopular in Germany. The country’s leaders also point to their contributions to U.S. forces, who use bases in Germany as transport hubs for operations in the Middle East and Africa.

Retired Lt. Gen. Ben Hodges, who commanded U.S. Army Europe until late 2017, said the issue of money is tearing at the alliance.

“Germany is our essential ally, our most important ally, but it seems like we are kicking them in the ass all the time,” Hodges said. “I don’t think it is the right approach. Certainly, they need to do more, but I think we need to be more sophisticated in how we incentivize burden sharing.”

A major challenge for NATO in Europe is moving its forces with greater speed, and Germany could play a role in building up infrastructure to support troop movements, which may be more politically doable in Berlin, Hodges said.

“We need more German trains, not German tanks,” he said.

Stavridis said the across-the-board defense spending increases in NATO in recent years were long overdue and should be viewed as progress. “But it will not go fast enough to satisfy Donald Trump, and the anger and petulance will probably increase,” he said.

Meanwhile, the “huge political disconnect between Trump’s dislike of NATO and its democratic leaders and his frequently expressed admiration for the authoritarian leader Putin is an enormous discontinuity for the alliance,” Stavridis said.

Allies “will correctly fear a terrible NATO summit followed by a very warm Trump-Putin meeting,” Stavridis added, regarding the July 16 summit in Helsinki. “They should be particularly concerned about a Trump giveaway — withdrawing troops from Europe, cutting defense funds to U.S. European Command, stopping ‘provocative’ exercises. If Trump follows the script he is executing with North Korea, their fears would appear very justified.”

After meeting North Korean dictator Kim Jong Un, Trump took the U.S. military by surprise when he canceled joint U.S.-South Korean exercises in a gesture of good faith to Pyongyang.

In Europe, Trump’s rejection of the nuclear deal with Iran and wide-ranging trade tariffs on several allies that threatens a full-blown trade war with longtime allies, add to trans-Atlantic angst. Further confusion is being caused by the Pentagon review of the costs involved in pulling troops out of Germany after Trump expressed interest in the idea, according to a Washington Post report.

But European security remains largely dependent on the U.S. and will remain so for the foreseeable future, which gives Trump unique leverage.

“Allies are trying to be as pragmatic as they can. I think for most allies, they understand that the U.S. is basically the backbone of the European security architecture,” said Steven Keil, an expert on NATO at the German Marshall Fund of the United States. European military capabilities don't provide a real alternative, Keil added.

“A lot of people are somewhat holding their breath,” he said. “It seems like the most hopeful outcome is a NATO summit that doesn’t make waves.”

Retired Air Force Gen. Philip Breedlove, who served for three years as NATO’s supreme allied commander before retiring in 2016, said rather than rhetoric, the U.S. should be judged by its military actions. During Trump’s tenure, military investments and deployments have increased in Europe, he said.

“We have to be careful that we don’t just get all wound up in rhetoric,” Breedlove said in an interview Friday. “If we focus on what the United States has done across the last three years, the old saying still applies — actions speak louder than words.

The central aim in Brussels must be to showcase alliance unity, Breedlove said.

Stars and Stripes reporter Slobodan Lekic contributed to this story.