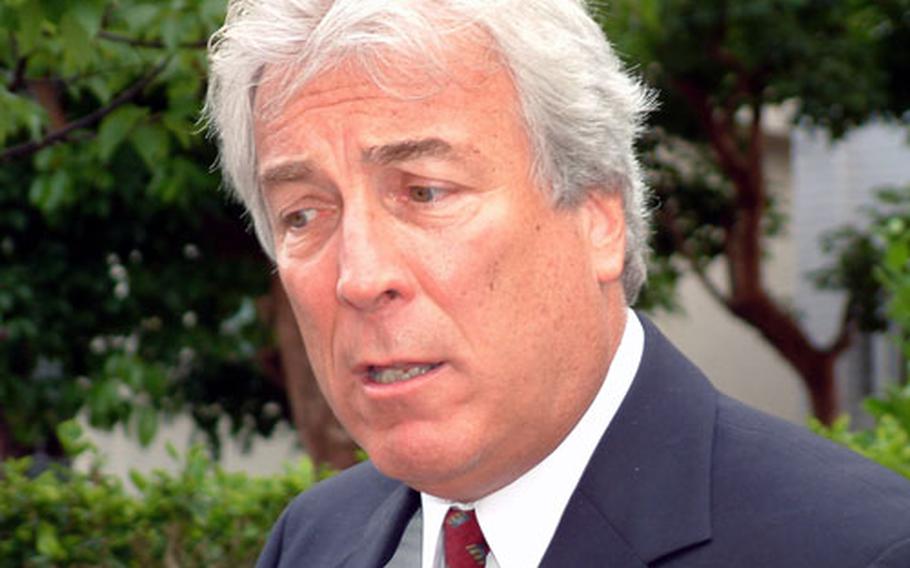 Attorney Michael Griffith wants Congress to look into the use of GIs in Japanese prisons to make commercial products. (File photo by David Allen / S&S)

CAMP FOSTER, Okinawa &#8212; When Rodrico Harp was sentenced to seven years at hard labor for his part in the infamous abduction and rape of an Okinawa schoolgirl in 1995, he never thought he&#8217;d be assembling cell phones or making auto parts. That&#8217;s what he claims &#8220;hard labor&#8221; meant at Kurihama, the Japanese prison near Yokosuka where most American servicemen convicted in Japanese courts wind up.

&#8220;I made parts for Mazdas and Nissans,&#8221; Harp said during a telephone interview from his home in Griffin, Ga. &#8220;You had no choice. If you refused to work, they put you in what we called a chill box, a little cell with nothing in it, and they forced you to sit rigidly all day at a desk until it was time to eat and sleep.

&#8220;Sometimes, if they thought you were too rowdy or misbehaving or just not doing what they wanted you to do, they&#8217;d put you in a straitjacket in a padded room.&#8221;

&#8220;Japan is in gross violation of international law by forcing prisoners to work for commercial companies,&#8221; Griffith said via telephone from his Long Island home. &#8220;It amounts to slave labor, nothing less.&#8221;

Japan prison officials and legal experts disagree. &#8220;We do not necessarily see inmates engaging in manufacturing commercial products as a problem,&#8221; said Makoto Teranaka, executive director of Amnesty International Japan. &#8220;We hear arguments criticizing that the practice harms fair competitive market activities. However, products made by inmates are no cheaper than those made in the regular commercial environment. The differences in the price for the products that a company pays and the amount an inmate receives goes in the prison coffer. &#8230; Every prison is supposed to be self supporting,&#8221; he said.

&#8220;Prison labor is a part of punishment,&#8221; said Teranaka. &#8220;Therefore, what inmates receive are not wages, but a financial incentive. What we see as a problem is that they work a full eight hours, which deprives them of any opportunities to receive counseling or other necessary treatment.&#8221;

Griffith, who represented the families of Harp and another defendant in the 1995 case, said American prisoners are forced to work eight hours a day for what amounts to about one dollar a day. They made auto parts and assembled cellular telephones, the former prisoners said.

&#8220;It&#8217;s in direct violation of the Forced Labor Convention of 1930, which prohibits the use of prisoners for outside contractors,&#8221; Griffith alleged.

The U.S. State Department lists Japan as a party to the convention. According to papers filed in a 1994 Congressional subcommittee hearing on the prison labor issue, Japan ratified the convention Nov. 31, 1932.

Harp was a 22-year-old Marine private first class when sentenced in March 1996 with Pfc. Kendrick Ledet, 21, and Navy Seaman Marcus Gill, 23, a medic, for raping a 12-year-old girl they abducted from a street corner in Kin village, just outside Camp Hansen. The incident occurred on Labor Day 1995.

Harp and Gill were sentenced to seven years and Ledet to 6&#189; years of hard labor. All three were released last year and dishonorably discharged.

According to Japanese prison officials, about 20 U.S. servicemembers are serving time in Kurihama prison. Their work assignments include kitchen work and cleaning cellblocks, or manufacturing commercial products.

&#8220;While in prison they were working for a Japanese automaker, making emblems for the front hoods and fabricating headrests,&#8221; Griffith said. &#8220;Harp told me that when the U.S. military guys came in to visit them, the Japanese would take the labels off the boxes so they wouldn&#8217;t see who the prisoners were working for.&#8221;

Griffith hopes to pressure Congress to hold hearings on the matter, in much the same way two house subcommittees met in 1994 on the Japanese prison labor issue.

At that time Rep. Gary L. Ackerman, (D-NY), chairman of the Subcommittee on Asia and the Pacific, was disheartened, he said, to hear the testimony of Christopher Lavinger, a client of Griffith sentenced to 16 months in a Fuchu prison on drug charges.

Lavinger told the congressmen he was struck with an electrified baton twice when he teetered from a rigid position on a chair where he was forced to sit nearly motionless for 12 hours a day after refusing to produce goods for Sega and several Japanese department stores, for the equivalent of about three cents an hour.

&#8220;It is my firm opinion that not only is this practice morally reprehensible, but it is also in direct contravention of international agreements on to which Japan and most other industrialized and civilized nations have signed,&#8221; Ackerman said in a statement made June 10, 1994.

The convention defines forced or compulsory labor as &#8220;any work or service exacted from any person as a consequence of a conviction in a court of law, provided that the said work or service is carried out under the supervision and control of a public authority and that the said person is not hired or placed at the disposal of private individuals, companies or associations.&#8221;

In some countries, including the United States, private companies use prison labor, but only with prisoner consent and for minimum wages.

Ackerman said a Japanese official told him the practice was not against Japanese or international law, but companies were instructed not to send any of the products to the United States because of the prohibition concerning prison labor.

In a letter to Griffith last year, Harp said he was forced to make and assemble cellular phone parts, car emblems and car panels. Pay ranged from 1,000 yen to 3,000 yen ($9.43 to $28.30) per month. He wrote to the U.S. Embassy in Tokyo complaining of being forced to work for private Japanese companies and was told in a two-paragraph response that, &#8220;SOFA status prisoners are the responsibility of the U.S. military in Japan, regardless of where the prisoner is serving his sentence. We have forwarded your letter to the Marine Corps Base Camp Fuji, for further action.&#8221;

Harp said no action was taken.

Amnesty International released a May report highlighting reports of torture and ill treatment of people while in Japanese custody.

However, Japanese members of the organization say the prison labor issue is not that serious.

Teranaka, the executive director, said the prison labor practices are under review by the Ministry of Justice.