Ex-kamikaze pilot spreads 'peacefulness through a bowl of tea' 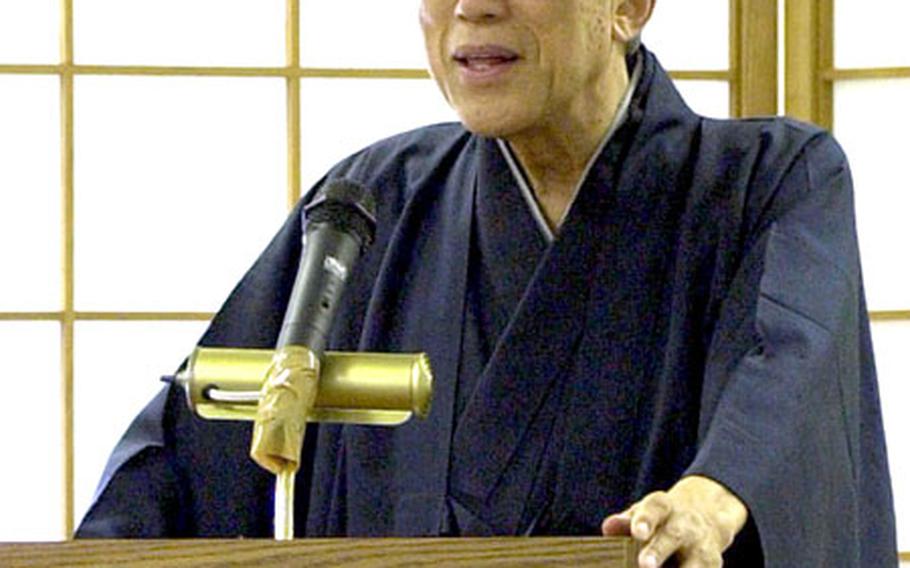 SEN Genshitsu, former grand master of the Urasenke tradition of the Way of Tea, talks to sailors and Marines at Camp Shields, Okinawa, on Monday. (Fred Zimmerman / S&S)

NAHA, Okinawa &#8212; SEN Genshitsu says the guilt of surviving World War II was the impetus for his quest for world peace.

He was on Okinawa recently to commemorate the 60th anniversary of the end of the Battle of Okinawa. At a solemn ceremony at Peace Prayer Park in Itoman, he dedicated tea to more than 200,000 people who died in the conflict. Then he sailed a few miles out in the sea to offer tea for fellow kamikaze pilots who perished in the waters.

In 1943, SEN was conscripted into the Imperial navy. In May 1945, as the Imperial army was pushed to its final defensive positions on southern Okinawa, he was chosen for the kamikaze suicide corps.

He was trained in western Japan, then sent to the southern tip of mainland Japan, where hundreds of kamikaze pilots before him took off on their one-way missions to attack the U.S. fleet.

The name of SEN&#8217;s plane was &#8220;White Chrysanthemum.&#8221; He spent weeks awaiting an order that never came, watching many of his fellow pilots take off to carry out their missions.

That feeling of indebtedness impelled him to spread the Way of Tea.

&#8220;I firmly believe that to strive for lasting world peace, eliminating war &#8230; is a sacred responsibility of those who survived the war.&#8221;

In 1951, SEN went to Hawaii to attend the University of Hawaii and see the United States, his former enemy.

&#8220;I was very impressed to know how big-hearted and friendly American people were,&#8221; he said. &#8220;I became determined to let people in the United States know, through sharing the spirit of the Way of Tea, that Japan is not a belligerent nation.&#8221;

At first, SEN taught a small group in Hawaii. The group grew, spreading to the U.S. mainland, Europe and throughout the world. He has taught in more than 60 countries.

In 1964, he inherited the title of great master from his father. As grand master in the Urasenke Chado Tradition, he has met with more than 100 international religious and political leaders, including Pope John Paul II, U.N. General-Secretary Kofi Annan and President Bush. His activities continued even after he transferred the title to his son in 2002.

&#8220;Despite many barriers, such as customs and education, the nature of human beings is the same,&#8221; SEN said. He said that the English phrase &#8220;after you&#8221; is a beautiful example of showing respect and care for others.