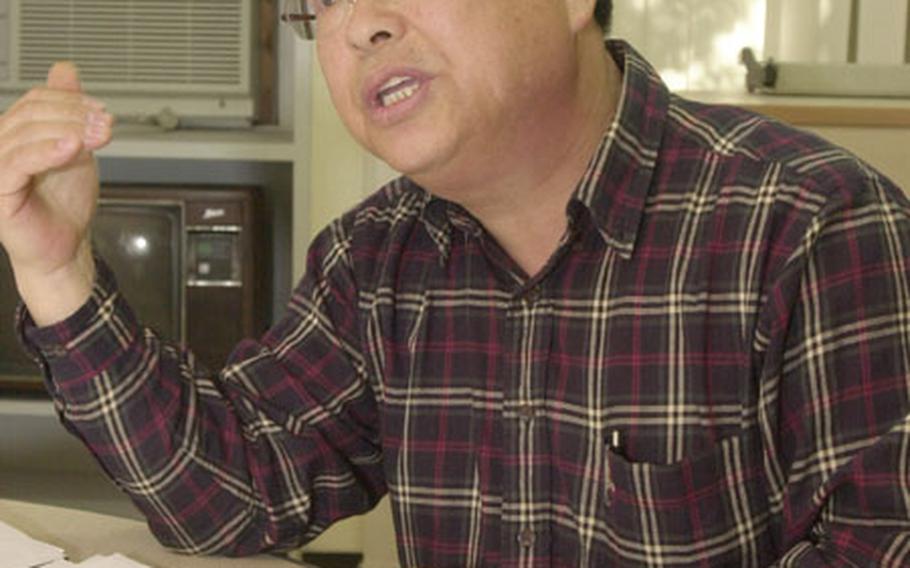 Kim Tong-sik, former housing manager at Yongsan Garrison, claims accusations of bribery and other illegal activities on his part are the result of lies by angry real estate agents. (Joseph Giordono / S&S)

YONGSAN GARRISON, South Korea &#8212; A South Korean housing manager removed from his position after allegations of bribery, conflict of interest and intimidation is under investigation again.

Included in more than 200 pages of investigative reports &#8212; with all names but Kim&#8217;s blacked out &#8212; obtained by Stars and Stripes last week, a legal services attorney found there was not enough evidence to support a bribery charge after a 2001 investigation.

In the investigation, CID accused Kim of accepting thousands of dollars in exchange for referring or approving leases at the housing department.

And although a base attorney found probable cause existed for conflict of interest and extortion charges during a 2002 investigation, no disciplinary action was taken, the reports show.

Area II spokesman John Nowell confirmed Friday that Kim is again under investigation for his actions while working in the housing department.

Kim, a 25-year base employee, was moved in the same pay grade to his position at the nearby housing area of Hannam Village in June 2002 during the investigation. He describes his job as a &#8220;detail&#8221; with no responsibilities and says he&#8217;s received no job description.

Prior to the investigations, he was the housing manager who approved soldiers&#8217; off-base leases and ensured they did not overpay landlords for apartments, based on square footage and condition.

Many soldiers and civilians live off-base in Seoul because of a lack of on-base housing; rent can soar to more than $4,000 a month.

According to investigative reports, real estate agents said Kim would indirectly solicit bribes in exchange for quick lease approval. He would also threaten to prevent them from doing business with the base if they didn&#8217;t comply.

On Friday, Kim&#8217;s new commander provided few details on the current investigation, but he confirmed there is a history of allegations.

&#8220;We are taking this case seriously,&#8221; Commander Col. Timothy K. McNulty said, adding his office is committed to ensuring civilians and soldiers make the &#8220;right decisions.&#8221;

Even though Kim no longer runs the housing office, many land managers say they fear reprisal.

He says landlords and real estate agencies are ripping off the base and that he worked hard to ensure the housing department&#8217;s rules are followed.

&#8220;The reason why I am still staying here is I am fighting against the bad, greedy landlords or Realtors and the authority of the Army,&#8221; Kim said.

CID reports said Kim would not accept checks or money orders, only cash at off-post restaurants or occasionally his office.

Other allegations related to extortion included:

&#8226; A woman at Crown Realty interviewed in September 2002 told an agent Kim attempted to interfere with her application to be registered with the housing department.

&#8226; A woman at C. Kim Realty said in August 2002 she heard of six different real estate agents paying Kim money along with gratuities such as hundreds of dollars worth of drinks at a bar in Kangnam. Kim insinuated to her that he would bar C. Kim Realty from the approved Realtor list, the report said.

&#8226; Another man from Dada Realty said he believed his problems with the housing department stemmed from not paying bribes. The man said he feared retribution if he assisted investigators, the report said.

But Kim is quick to point out he was lauded for his work, even when he was being investigated.

Kim said he has been compiling documents and plans to file an appeal to get his old job back.

Although Kim claims a CID agent suggested he resign, he won&#8217;t because other Koreans would think he quit because he took bribes.

During investigations in 2001 and 2002, CID agents accused Kim Tong-sik of accepting about $5,200 from two men in exchange for referring or approving leases.

A witness told investigators Kim would get 1 percent or 2 percent of a lease agreement&#8217;s value, investigative reports show. Another witness said landlords could bribe Kim into increasing the allowable monthly rent.

Similar-sized apartments in the same building were priced differently, the reports show.

One real estate agent said last week that Kim devised a demerit system and threatened to cut landlords off from base business if they made lease errors.

But Kim says he only related housing rules &#8212; under which agencies were barred if they violated fair market value rules three times &#8212; and that his advice included no threats.

Investigations showed Kim purchased a five-story apartment building in Itaewon in 1998 and rented it to U.S. soldiers while working for the housing department, which officials called a &#8220;conflict of interest.&#8221;

Kim&#8217;s mother-in-law was listed as the owner of the building; Kim told investigators he didn&#8217;t know he was obligated to tell his bosses about the purchase, according to the reports.

Kim told investigators using someone else&#8217;s name on a lease document helped avoid extra taxes and that he sold the building soon after the legal review.

When the agent asked how he purchased the $452,000 building in 1998, Kim said he took over a mortgage payment, borrowed money from his wife and mother-in-law, and used his savings.

Kim was asked for his financial statements.

Kim said Thursday it is Korean custom to list the building under his mother-in-law&#8217;s name, and that tenants sublet apartments to U.S. soldiers without his knowledge.

During an April 2002 interview, former Deputy Housing Director Jane Overstreet, who left Korea about a year ago, said:

&#8220;Kim knew the housing policies very well and would certainly know that he was misleading housing on the agreements.&#8221;

In the report, an agent wrote, &#8220;Mr. Kim&#8217;s leasing his property to soldiers without the knowledge of herself [Overstreet] or the director of housing&#8221; was a conflict of interest.

Other investigative documents say witnesses claim Kim was the only one allowed to deal with certain real estate agents and customers.

A sergeant first class interviewed by CID agents in January 2002 said a landlord gave him specific directions to Kim&#8217;s office. When a female Korean employee told the sergeant that required lease documents were missing, the sergeant was directed by a male Korean employee to Kim&#8217;s office because the lease agreement was a &#8220;special case.&#8221;

The major passed the information to a lieutenant colonel in charge of housing, the December 2001 report said. The lieutenant colonel &#8220;told him that Mr. Kim T.S. was saving the U.S. Army millions of U.S. dollars due to his good management practices.&#8221;