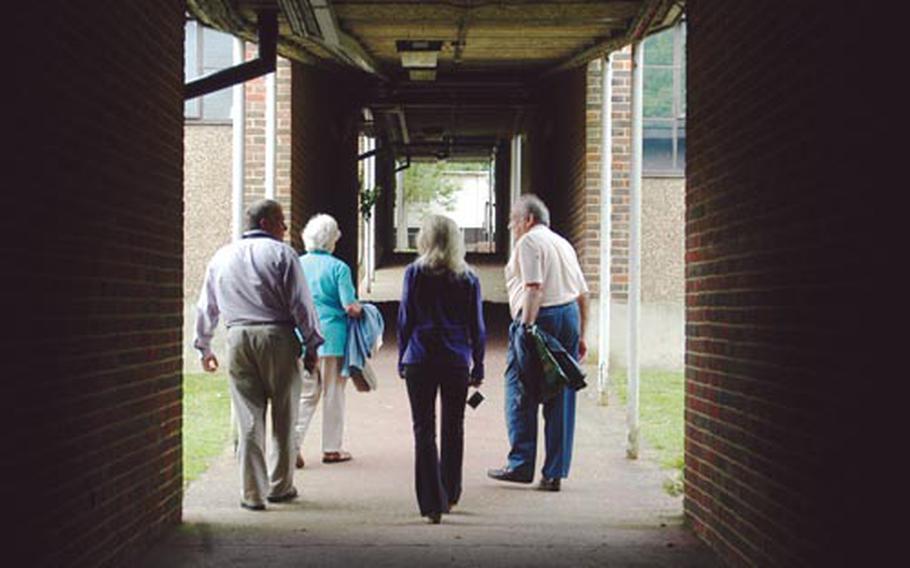 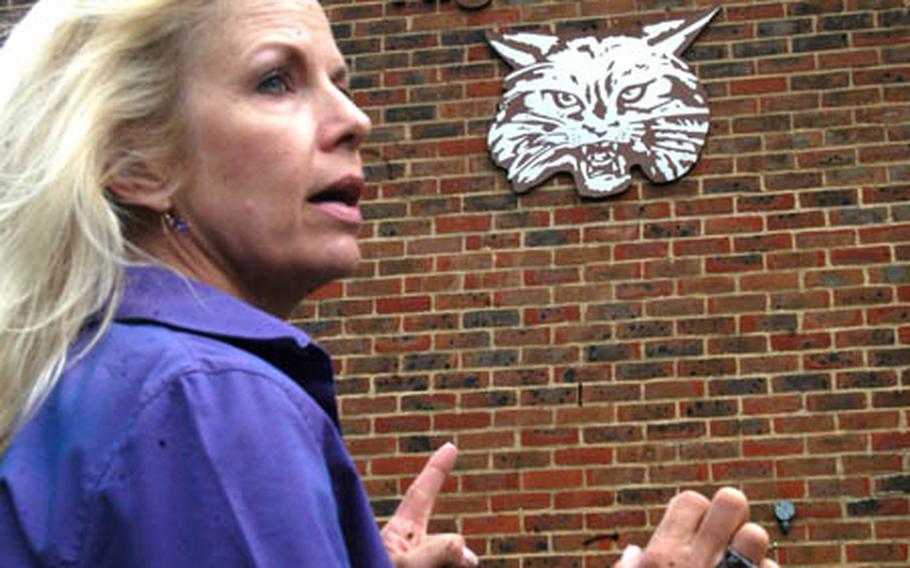 Susan Kazara Harper tells others how she discovered the image that became the latest London Central High school bobcat symbol while preparing student handbooks in the mid-1980s. Harper, a former secretary at the school, was part of a small group touring the campus last week. (Sean Kimmons / S&S) 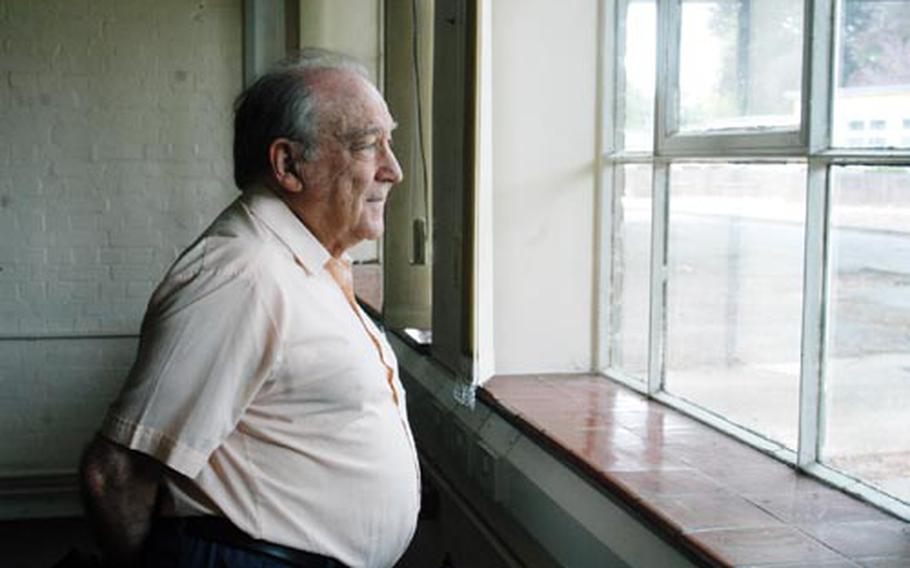 Jack Wernette gazes out a window of his old classroom in the now-closed London Central High School. The 83-year-old taught English and drama at the school for 25 years until he retired in 1993. (Sean Kimmons / S&S) 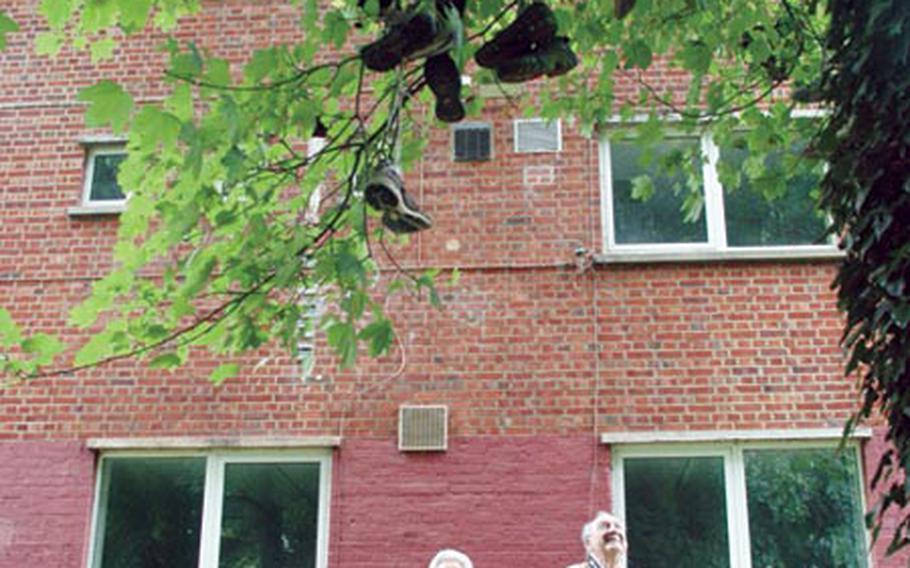 Jean Taylor, left, and Jack Wernette admire a tree behind the male dormitory that is decorated with at least 50 pairs of shoes left by departing students. Taylor and Wernette were on a tour of the vacant London Central High School campus, where they once worked. (Sean Kimmons / S&S)

RAF DAWS HILL &#8212; Memories began to resurface for 83-year-old Jack Wernette once he stepped foot into his old classroom, now abandoned as with the rest of the London Central High School campus.

The former drama teacher spouted off the names of past students &#8212; several of them who ended up in show business &#8212; and then of school plays he helped produce until he retired in 1993.

"We had quite the theatrical setup here," he recalled while gazing out the window. "There was always something going on."

Wernette spent 35 years at the school as it jumped to three different campuses outside London in its 56-year existence. In 1971, it landed on RAF Daws Hill near High Wycombe, where it closed for good last year.

"There&#8217;s a lot of nostalgia here," he said of the school, where he met his wife, Peg, also a former teacher. "Lots of memories."

London Central was unlike any other school, insists Sean Kelly, a 1978 graduate. He estimated that students from more than 30 countries attended the international school. Many lived in campus dormitories yearround while parents worked at remote locations.

"It was a whole separate world," Kelly said of the multicultural student body. "I would like to think that it&#8217;s given me a far more global view of the world."

To return the favor, he authored "From the Faculty Lounge," a 300-page tribute to the school filled with self-written memoirs by former faculty and alumni. Last week, he invited Wernette and a few other ex-faculty members to relive the glory days on a tour of their old stomping grounds.

Ministry of Defence officials let the small group borrow the key to the gated, vacant campus. Once inside, they drove the empty streets, stopping at certain buildings.

The quiet campus had a surreal setting. Overgrown weeds and leaves littered the roads, instead of vehicles. And classrooms once filled with students and desks sat empty in the dark.

"It&#8217;s very odd with no kids milling around," Jean Taylor chuckled as she headed toward the dorms.

The cheery 81-year-old, who worked in the administration office from 1971-88, also chaperoned school dances, she said. She recalled when students used cafeteria trays as sleds to race down "suicide hill" in the snow behind the male dorms.

"I loved working here, and I got along with the kids," Taylor said.

While strolling around the abandoned campus, they shared a laugh over a rumor circulating during the Cold War that local villagers assumed the school&#8217;s dorms were missile silos.

The group ventured to the rear of the male dorms, where Kelly asked everyone to look up at a tall tree. Hanging from its branches were at least 50 pairs of shoes, left behind by departing students.

Susan Kazara Harper was one of the last people to leave the campus in September. But you won&#8217;t find her shoes in the tree. Instead, she left her mark in the 1980s when she discovered what would become the school&#8217;s most recent mascot image, the fierce mug of a bobcat.

"It&#8217;s a shame that it&#8217;s shut down, but things move on," Harper, a former secretary, said as she peered up at the bobcat image imprinted on the school.

How the campus will move on is still up in the air. Daws Hill is declared surplus to military requirements and MOD&#8217;s Defence Estates has been tasked to dispose of it, according to Ian Dennison, who works for the estates&#8217; planning and disposals sector.

"The site is likely to be redeveloped to help meet the shortage of housing in the High Wycombe area," he wrote in an e-mail. "The status of the existing and former London Central High School buildings in the redevelopment of Daws Hill has yet to be decided upon."