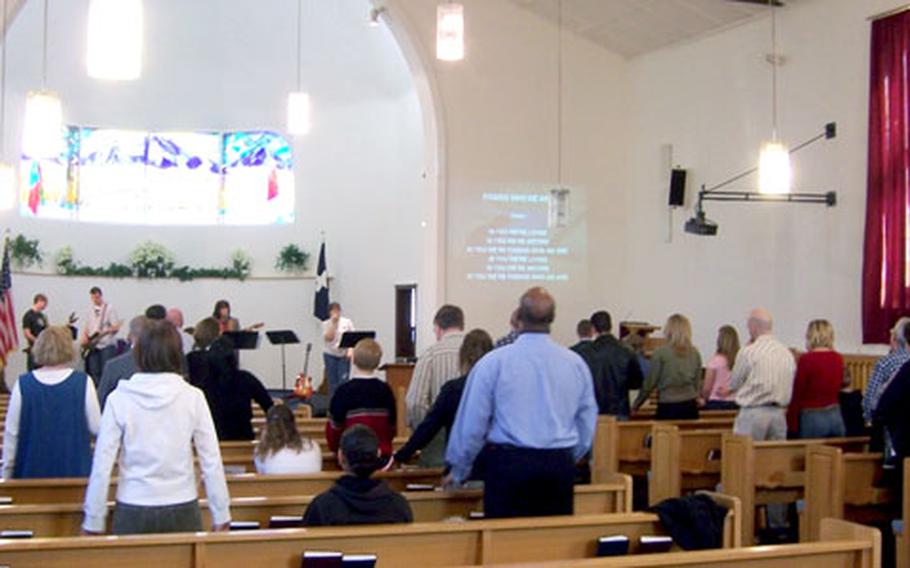 At its height, the now-defunct EDGE worship service once held at the Daenner Chapel in Kaiserslautern, Germany, from March 2004 to June 2006 drew between 60 and 100 congregants. The non-denominational group featured contemporary-style praise music and targeted the 18- to 40-year-old crowd. ()

At its height, the now-defunct EDGE worship service once held at the Daenner Chapel in Kaiserslautern, Germany, from March 2004 to June 2006 drew between 60 and 100 congregants. The non-denominational group featured contemporary-style praise music and targeted the 18- to 40-year-old crowd. () Because the EDGE praise team was youth-oriented, its church garb was casual. ()

Editor&#8217;s note: To be interviewed by Stars and Stripes, Brian Smith was told by his chain of command that he could not be quoted using his military affiliation or rank. However, according to the Joint Ethics Regulation Section 3-307, Smith could have used his military branch and rank if he had given a disclaimer stating that his views did not necessarily represent those of the Department of Defense and its components.

KAISERSLAUTERN, Germany &#8212; A founding member of a recently canceled contemporary Christian worship service is hoping the non-traditional service can be resurrected.

But, he says, if the EDGE, a weekly, non-denominational service at Daenner Chapel that catered to the 18- to 40-year-old crowd, had received full and consistent support from Kaiserslautern military community chaplains, it would not have deteriorated to the point of being canceled in the first place.

Military demographics suggest that most people are 18 to 40 years old, Smith said. Of that group, the majority would prefer contemporary worship, according to data from the George Barna Research Institute, a marketing research company based in California that specializes in research for Christian ministries.

&#8220;They&#8217;ve willingly taken a service capable of reaching that demographic group away. For what reason? Because it was too hard? Because they didn&#8217;t support it? They didn&#8217;t have somebody with the same vision?

The garrison did not have the manpower to dedicate one chaplain to the EDGE, so the service was covered on a rotating basis, said Lt. Col. Doug Wootten, U.S. Army Garrison Kaiserslautern staff chaplain.

He acknowledged that consistency plays a role in growing a service. &#8220;Whenever you can keep the same pastor there for some longevity, it always assists with the growth and development of congregations,&#8221; Wootten said. &#8220;But we don&#8217;t always have the luxury in the military these days with the coming and going with the war. &#8230; We have to do with what we have.&#8221;

The idea for the EDGE began around March 2004, with services starting a few months later. The services were canceled in early June 2006. At its peak, the EDGE was drawing between 60 and almost 100 patrons to its weekly Sunday service. Its praise team &#8212; the core group of the EDGE, which provided music for the services &#8212; numbered 13 people at its height.

In the fall of 2005, the demise of the EDGE began, Smith said. The chaplain who started it had gone downrange months before. A new chaplain arrived, but soon was selected for an education course and had to leave.

Beginning in fall 2005, Army chaplains in Kaiserslautern began preaching at the EDGE service on a rotating basis. Frustration over a lack of support and no consistent chaplain prompted an exodus by worshippers, Smith said.

A lack of available chaplains, a declining congregation, departing praise team members and a poor location are some of the reasons why Wootten believes the service was canceled. Based on his observations, the young soldiers whom the service was targeting were not showing up. The ones who would come wouldn&#8217;t stay, he said.

While Wootten said the garrison could have done a better job of marketing the EDGE service, he said he felt the blame could not be pinned on one person.

&#8220;I think we always want to try to pin it on someone,&#8221; Wootten said. &#8220;I know Brian feels that the leadership is responsible, and I&#8217;m not going to say we&#8217;re not responsible. I think we&#8217;re responsible to make wise choices and decisions about what&#8217;s existing, what can continue, what may not be able to continue based on the resources and what happened internally to the service with all the musicians going away.&#8221;

The garrison plans to try a new contemporary Christian evening service with Worship on Wednesday at the Pulaski Barracks chapel in September.

Smith believes that for an Army contemporary service in the Kaiserslautern community to thrive, it must be held at the right location with full support, several ministries and a midweek service in addition to Sundays.