Ewa defenders honored on anniversary of Japanese attack on Hawaii 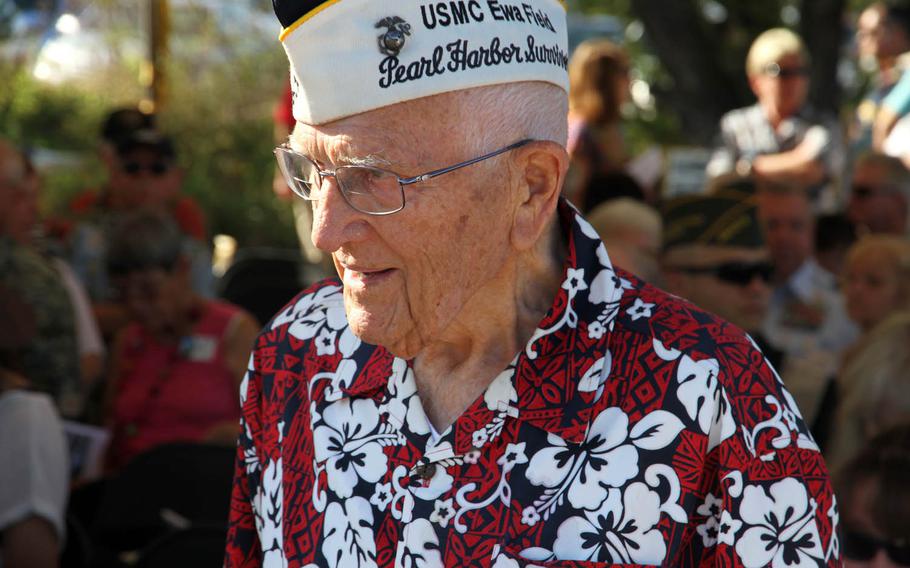 John Hughes speaks with guests after a ceremony Tuesday, Dec. 6, 2016, at Ewa Field commemorating the actions of Marines during the surprise attack by Japan 75 years ago at the site. Hughes, then a sergeant, alerted his fellow Marines that the commotion they heard was no drill. (Wyatt Olson/Stars and Stripes)

John Hughes speaks with guests after a ceremony Tuesday, Dec. 6, 2016, at Ewa Field commemorating the actions of Marines during the surprise attack by Japan 75 years ago at the site. Hughes, then a sergeant, alerted his fellow Marines that the commotion they heard was no drill. (Wyatt Olson/Stars and Stripes) 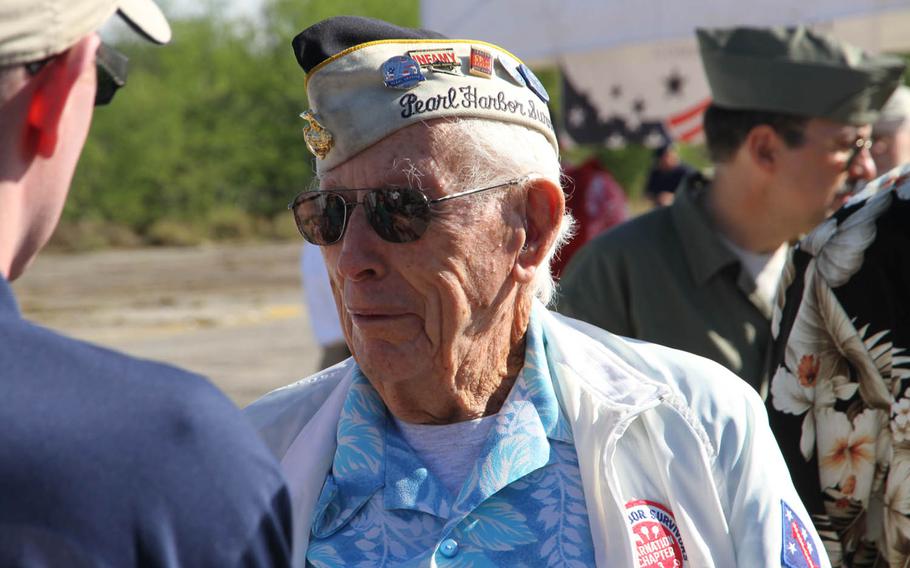 Eugene Leonard was stationed at Ewa Field as a Marine during the Japanese surprise attack in 1941. A ceremony held Tuesday, Dec. 6, 2016, at the field was the first time he had returned since World War II. (Wyatt Olson/Stars and Stripes) 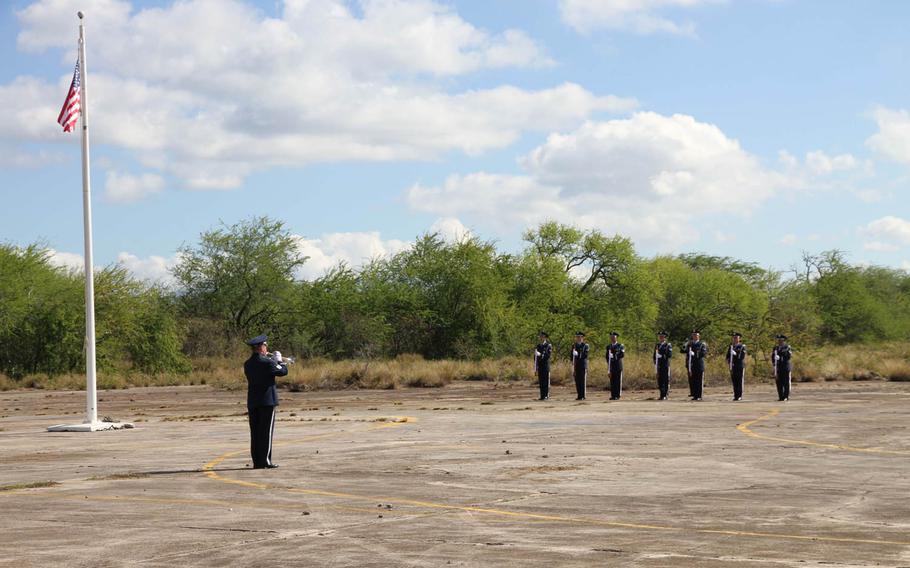 Taps is played at a ceremony Tuesday, Dec. 6, 1941, at Ewa Field recognizing the actions of Marines at the site during the 1941 surprise attack by the Japanese. (Wyatt Olson/Stars and Stripes) 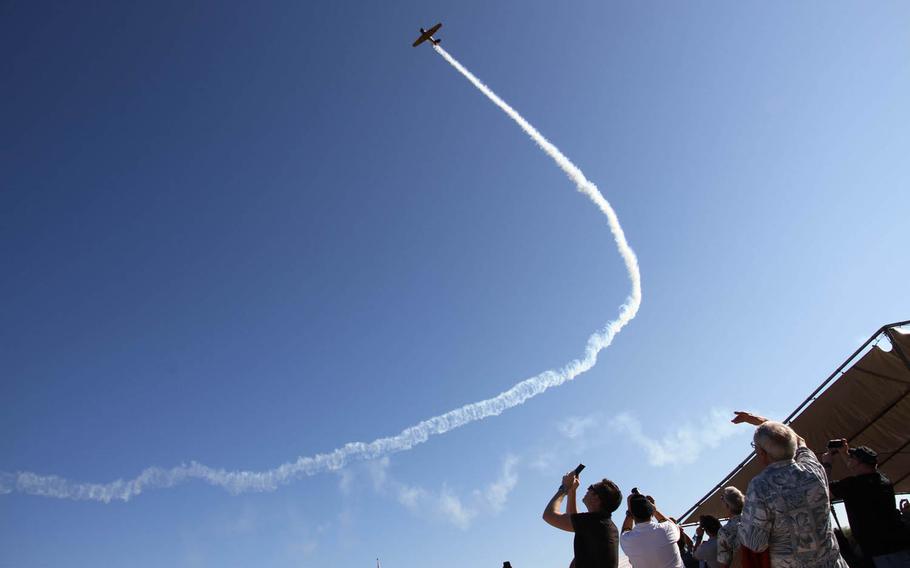 A World War II-era plane flies over a ceremony at Ewa Field, Tuesday, Dec. 6, 2016. The events in Ewa have always been overshadowed by the immense catastrophe that took place at Pearl Harbor, where the U.S. battleship fleet was decimated. (Wyatt Olson/Stars and Stripes) 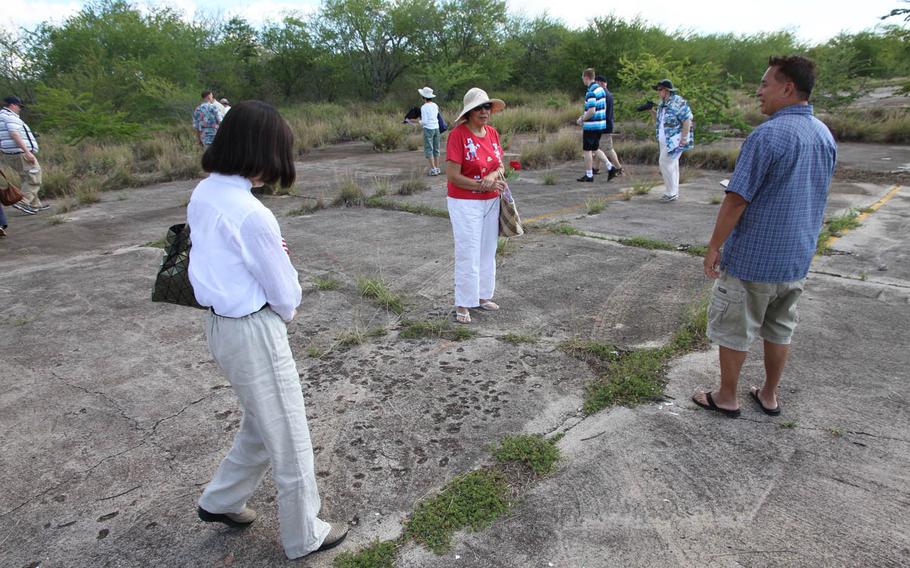 Visitors inspect pock marks left from strafing during Japan's Dec. 7, 1941, surprise attack at Ewa Field, Hawaii. They had attended a ceremony commemorating those who had defended the Marine Corps air station. (Wyatt Olson/Stars and Stripes)

EWA FIELD, Hawaii — Sgt. John Hughes and his fellow Marines had finished Sunday breakfast on Dec. 7, 1941, and most had returned to the tents that served as their barracks.

“All of a sudden, we heard some noise,” Hughes said during a Tuesday ceremony at the airfield that has sat largely undisturbed since the surprise attack. “I ran out into the street, looked up the street … and saw this low-flying airplane come across — a big red ball on the side and a big torpedo underneath. So I knew this was no drill.”

Hughes raced back to the tents and alerted the men of the Japanese attack.

“So I grabbed a bandolier of my own and went down to clear the area,” he said. “Several of us were gathered, and we shot at a few planes.”

The next two hours were futilely spent alternately shooting at Japanese planes as they approached to open fire and trying to push the aircraft out of a formation that was so handily strafed.

At the “end of the whole deal,” there was not one flyable airplane left out of the 60 at the air station, Hughes said. Four Marines were killed on the airfield.

“We had nothing to do but clean up the mess,” he said.

The events in Ewa have always been overshadowed by the immense catastrophe that took place at Pearl Harbor, where the U.S. battleship fleet was decimated. Ewa had been largely forgotten through time, but in recent years a group of locals has spearheaded an effort to preserve and remember the Ewa Field battlefield, which was placed on the National Register of Historic Places in May.

Tuesday’s eighth-annual commemoration, sponsored by American Veterans Hawaii, was held on the field originally called Ewa Mooring Mast Field. It was intended to serve as a dirigible port for the Navy.

Several other veterans at Ewa 75 years ago also attended.

It was Eugene Leonard’s first time back since he was stationed at the airfield. Leonard, 98, was in a truck when the attack began and found cover in a scorpion-infested sinkhole.

Simon Nasario, 98, was a soldier stationed at Schofield Barracks but had a weekend pass and was staying with his aunt and grandmother in Ewa.

His grandmother woke him and urged him to look out the window. He saw the low-flying planes strafing the nearby airfield. Nasario made a beeline for Schofield.

“Surrounded by the brush and the approaching development around it, this Marine Corps airfield still speaks to us,” he said, only yards from slabs of concrete still riddled with machine-gun bullets 75 years after the attack. “The echoes of history are still here.”