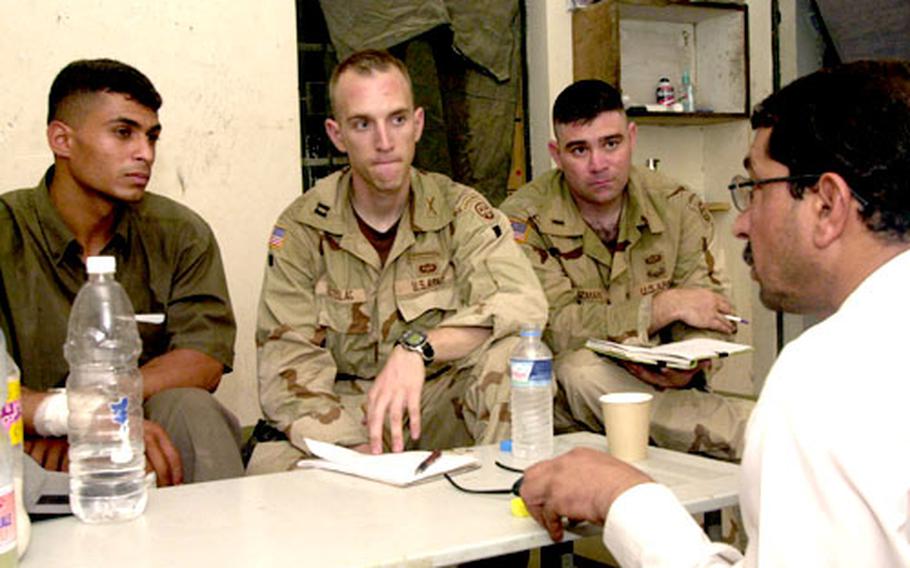 Two soldiers from the 82nd Airborne Division interrogate a detained man in Baghdad, Iraq, with the help of an interpreter. Changing missions have forced servicemembers to learn new jobs and adapt to new roles. Troops are divided: While 35 percent say their mission in Iraq is “mostly not clear” or “not clear at all,” an equal number say the mission is “very clear” or “mostly clear,” according to a Stars and Stripes questionnaire. (Scott Schonauer / S&S)

Two soldiers from the 82nd Airborne Division interrogate a detained man in Baghdad, Iraq, with the help of an interpreter. Changing missions have forced servicemembers to learn new jobs and adapt to new roles. Troops are divided: While 35 percent say their mission in Iraq is “mostly not clear” or “not clear at all,” an equal number say the mission is “very clear” or “mostly clear,” according to a Stars and Stripes questionnaire. (Scott Schonauer / S&S) 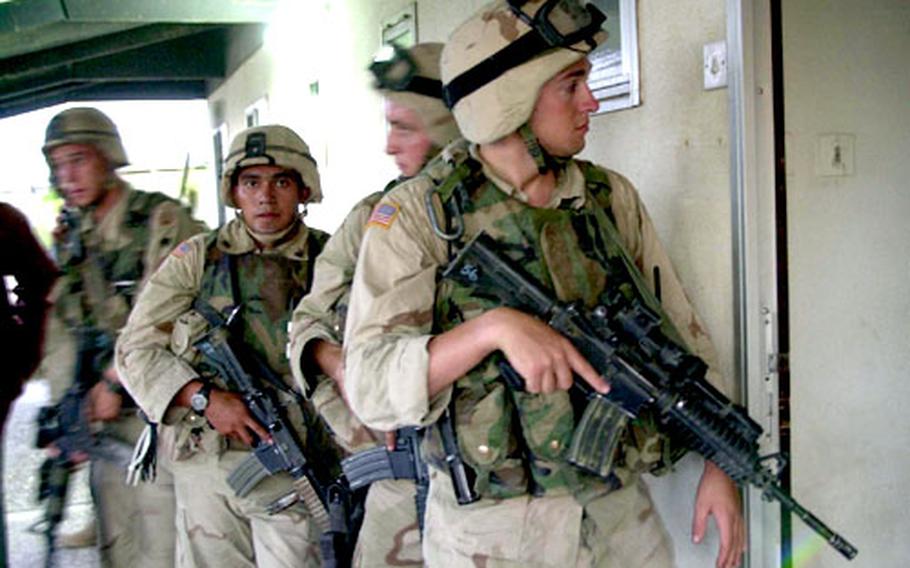 Soldiers with the 82nd Airborne Division prepare to raid a home near Baghdad International Airport in Iraq in August. The soldiers raided the house on a tip that the owner was hiding or had information about surface-to-air missiles. (Scott Schonauer / S&S) 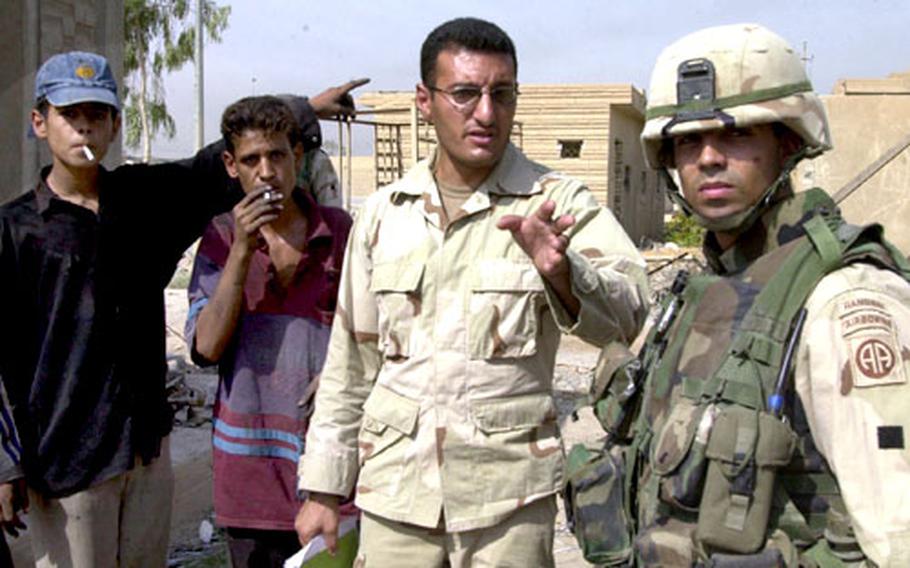 A coalition interpreter, center, talks with Sgt. 1st Class David Santos in August. Santos and the interpreter had stopped to talk to a group of homeless boys, pictured to the left, in Baghdad. (Scott Schonauer / S&S) 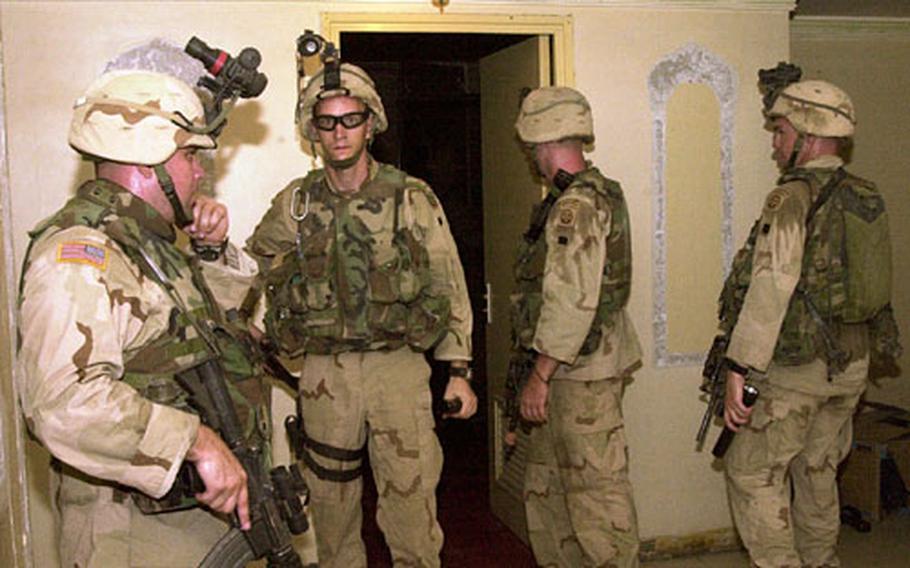 Soldiers with the 82nd Airborne Division wait for additional orders after searching a home in Baghdad, Iraq, after an August raid. (Scott Schonauer / S&S) 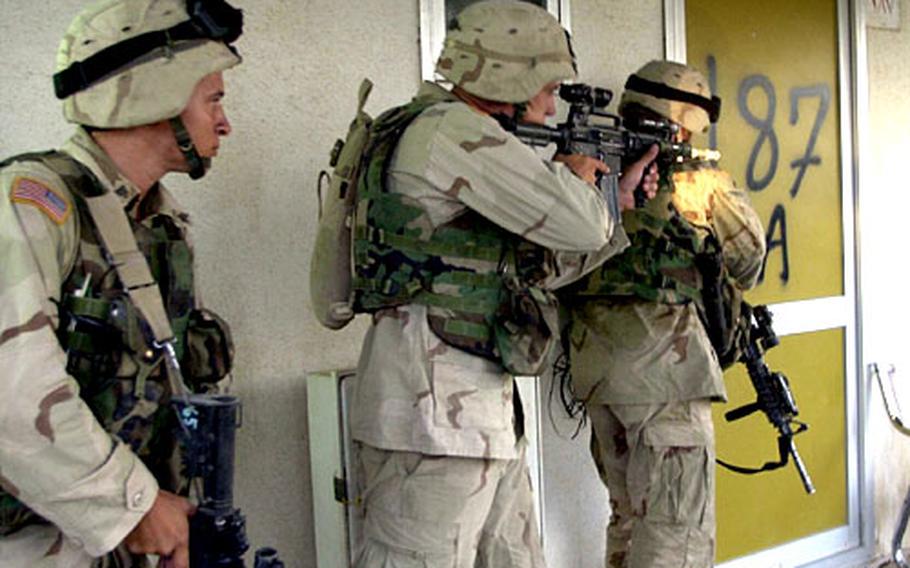 Soldiers with the 82nd Airborne Division raid a home near Baghdad International Airport in August. The soldiers acted on a tip that the owner was hiding or had information about surface-to-air missiles. (Scott Schonauer / S&S)

Day Five of a seven-day Stars and Stripes series on conditions and morale in Iraq.

BAGHDAD, Iraq &mdash; It was a routine traffic checkpoint. But the soldiers weren&rsquo;t looking for illegal weapons, regime loyalists, terrorists or even fugitive dictator Saddam Hussein.

They were looking for window tint.

Any vehicle with blacked-out windows got stopped.

After the occupants stepped out of the car, heavily armed soldiers from the 82nd Airborne Division ripped off the tint, which the U.S. military calls a security risk.

Some soldiers point to the job as another example in post-war Iraq of how far they have drifted from their traditional role as warriors. For example, military band members in the north are conducting perimeter patrols. A maintenance company at Camp Dogwood said it is burning latrine waste. And a Marine sergeant at Pistol Factory who said &ldquo;we were told we were shock troops and not an occupying force&rdquo; is now doing humanitarian missions.

The evolving mission has left some troops disillusioned with the reasons for being in Iraq, frustrated with an ambiguous mission and struggling to learn duties they were never trained to do.

Other troops say soldiers need to do whatever the military needs them to do, even if it&rsquo;s not their specialty.

A 30-year-old National Guardsman with the Florida-based 3rd Battalion, 124th Infantry Regiment wrote on his questionnaire, &ldquo;Our mission has changed more than the president changes his underwear.&rdquo;

Army Reserve Staff Sgt. Carla Williams, 39, of the 353rd Transportation Company wrote that she is not exactly sure what her unit is supposed to be doing.

&ldquo;Our mission has changed, but I haven&rsquo;t been told exactly what our mission is since after the war started,&rdquo; she wrote on her questionnaire.

While top leaders acknowledge the mission is complex, they say the goals are straightforward.

&ldquo;I think the missions we have are very clear,&rdquo; said Lt. Gen. Ricardo Sanchez, the Army&rsquo;s top commander in Iraq.

&ldquo;One: Conduct offensive operations against noncompliant forces. The second one is stability and support operations in our zone.&rdquo;

Different commands have different priorities, Sanchez added, but all work toward those two goals.

For the tanker crews, infantry units and paratroops on the ground, that means first hunting down regime loyalists and terrorists, and then starting to build schools, create Internet cafes, clean up trash, train Iraqi army recruits, crack down on organized crime and form neighborhood-watch programs.

It is a mammoth assignment.

Many of the jobs, troops said, are more suited for military police or civil affairs units, but traditional soldiers are carrying the bulk of the workload.

Some units have gone from full-fledged combat to setting up city councils. While they help rebuild Iraq, they continue to face daily attacks from an elusive enemy.

The low-intensity conflict, which has seen 101 combat deaths since major combat was declared over on May 1, has many soldiers unsure how to approach their new tasks.

When asked how closely what they&rsquo;re doing now is related to their training, 40 percent of the servicemembers said it is &ldquo;not close&rdquo; or has &ldquo;nothing to do&rdquo; with training.

Members of the 82nd Airborne Division in Baghdad said that what they do daily has little to do with the air assault operations they practice religiously at Fort Bragg, N.C. Like it or not, soldiers trained to parachute into a hot landing zone and unleash hell find themselves in a mission now that requires more finesse and less sheer force.

For instance, one evening during the summer a group of soldiers from the 82nd prepared to raid an apartment complex in Baghdad.

The translator knocked on the door, but a woman inside refused to come out. In the darkness, soldiers impatiently stood nearby with their rifles locked, loaded and aimed at the door. One yelled an expletive directed at her. The derogatory name would make any woman cringe.

The startled family slowly walked out to face a group of heavily armed soldiers with night-vision goggles fastened to their Kevlar. The mother, dressed in a nightgown, was so terrified she needed help walking outside.

Post-war Iraq for the American soldier has required some rough, tough and brash soldiers to check their attitudes and holster the killer instincts that served them so well in March. At the same time, they have to be prepared for shooters hiding in the shadows.

Many are doing just that, despite not having the specific training needed.

Battalion Command Sgt. Major Randy Johnson with the 82nd said his troops might lack the know-how, but his soldiers are doing a great job under the circumstances.

Each day, he tours the different companies spread out across the sector near the airport and visits his men. He calls his favorite soldiers DICKs &mdash; an acronym that means Dedicated Individual Committed to Killing.

&ldquo;I&rsquo;m so proud of these men,&rdquo; Johnson said, riding in his Humvee from camp to camp. &ldquo;I love these guys. This is not easy, but they&rsquo;re doing the best they can.&rdquo;

Pfc. Nathan Cummings, 20, of the 173rd Airborne Regiment, lives in a safehouse in Kirkuk. He had been doing patrols before helping train Iraqi police officers.

&ldquo;It&rsquo;s good for the welfare of the city,&rdquo; Cummings said. &ldquo;But I&rsquo;m an 11 Bravo [infantry soldier], I&rsquo;m not a police officer.&rdquo;

Staff Sgt. Scott Riley, 29, who is with the 101st Airborne Division in the Mosul area, said he plans to get out of the Army after 10 years of service. &ldquo;It killed my morale when they told me I was on the peacekeeping force &mdash; and I&rsquo;m a seasoned soldier.&rdquo;

Another soldier who feels underused is Spc. Tramaine Lee, 22, of the 3rd Battalion, 320th Field Artillery Regiment at Talafar air base. &ldquo;When the war was going on, my mission was to find and destroy the enemy. Now that the war is pretty much over, my job is not needed here anymore, so now all I do is go on fuel distribution missions and pull guard on a daily basis.&rdquo;

Army Sgt. Glenn Girona, a tanker who is living on a base in Baghdad called Bandit Island, said he spends most of his time guarding sites where there is little or no threat. He said he doesn&rsquo;t believe he is trained to do what he is doing. &ldquo;I&rsquo;m making it up as I go along.&rdquo;

But he said his personal mission is crystal clear: &ldquo;My main mission is to get home alive.&rdquo;

While some soldiers grumble over the mission, others just grit their teeth and make the best of it.

&ldquo;You don&rsquo;t have to like what you&rsquo;re doing, but you have to do it,&rdquo; a 34-year-old reservist with the 443rd Military Police Company at Camp Cropper wrote on his survey.

Although they have yet to find Saddam, coalition forces found and killed his sons, Odai and Qusai. Both were widely despised by Iraqis.

So far, troops have captured or killed 37 of the 55 most-wanted Iraqis. And nearly every day, units apprehend regime loyalists or suspected terrorists. They often find or are led to weapons caches.

Sgt. 1st Class Fermin Jiminez, 41, of the 3rd Battalion, 124th Infantry Regiment in Baghdad said the deployment has given him an opportunity to meet the people of Iraq.

&ldquo;All these missions are different than what I would usually do, but all is working out great,&rdquo; he wrote in a survey. &ldquo;It feels good to come face-to-face with Iraqi locals and make contact with them. They are beautiful people.&rdquo;

Not everyone appears to be as glowingly optimistic.

Spc. Michael Wadle, 21, rates his personal morale as high, but he said the murky mission has left some soldiers stewing. He is an infantry soldier with the 101st Airborne Division who is running a store for troops.

&ldquo;A lot of stuff we&rsquo;re doing here doesn&rsquo;t make any sense at all,&rdquo; Wadle said. &ldquo;Basically, the mission here isn&rsquo;t really clear anymore. The vast majority of us are just sitting here with nothing to do. We just don&rsquo;t understand, and that&rsquo;s bad.&rdquo;

&ldquo;A lot of these soldiers have been asked to do things they haven&rsquo;t been trained for,&rdquo; he said. &ldquo;To some degree, we&rsquo;ve been successful. We&rsquo;ve had to learn it from the ground up.&rdquo;

In addition to catching hiding regime loyalists, the unit has adopted 117 schools as part of a program to fix them up. The unit also recently opened up an Internet caf&eacute; in town.

&ldquo;Our primary focus is to go out and catch&rdquo; regime loyalists and terrorists, Sossaman said. &ldquo;But our goal also is to leave this place a much better place than we found it.&rdquo;