Everything but the sand: Exercises prepare V Corps for Iraq duty 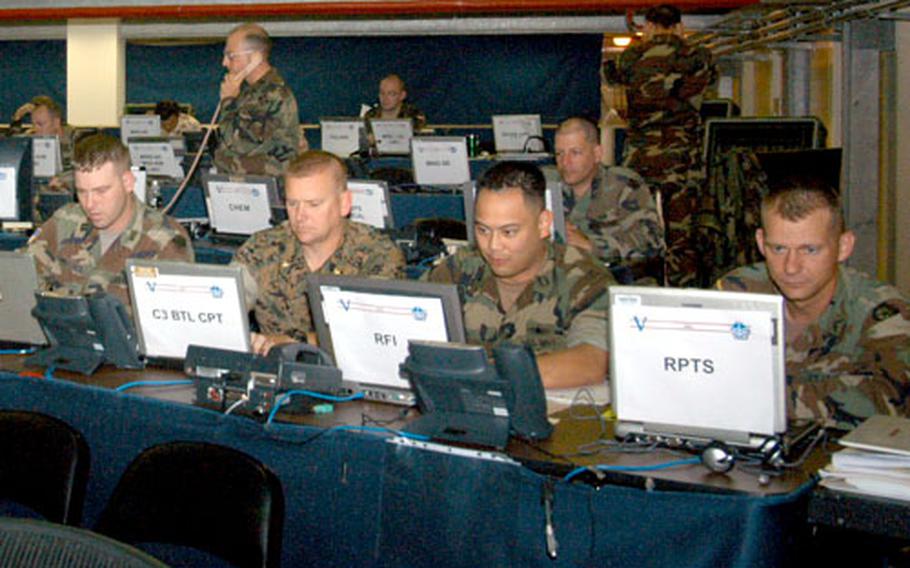 GRAFENW&#214;HR, Germany &#8212; To make V Corps&#8217; training to run Multinational Corps Iraq any more realistic, the Army would have to truck in a beachload of sand and a whole mess of heaters.

From ultra-tight security and aggressive role-playing reporters to a succession of simulated events so intricate and chaotic they could only be a rehearsal for war, about the only thing missing at the Grafenw&#246;hr training area is the desert.

But even as the corps goes through its final practice run leading up to the deployment, one important question lingers: Who will lead the V Corps troops in Iraq?

Officially, Lt. Gen. Ricardo Sanchez is still in charge of the unit this week, and he has been present at parts of the exercise. But he isn&#8217;t expected to be its commander in Iraq, said Maj. Mark Wright, another V Corps spokesman.

Neither V Corps nor U.S. Army Europe officials would say who is at the helm &#8212; or whether that person is even in Grafenw&#246;hr for the training.

Regardless of who is running the show for V Corps, the 7th Army Training Command has worked hard to create the &#8220;contemporary Iraqi operating environment,&#8221; said Brig. Gen. Mark Hertling, 7th ATC commander.

Simulating the command experience is a major task involving thousands of personnel. &#8220;From an exercise perspective, this has been the biggest thing that we&#8217;ve ever done,&#8221; he said.

To simulate the Iraq theater, exercise planners feed information about events in the scenario to V Corps staff and monitor their reactions.

In one scenario, riots and demonstrations broke out in a climate of rising sectarian violence stretching from Mosul to Samara, while at the same time a major religious conference got under way and unrelated attacks hit American supply routes. Reports of the events reached the command center the way they would downrange, through media coverage and reports from the field.

Planners throw everything but a made-up hurricane at the trainees in the intense, weeklong sessions, said Col. Roger King, USAREUR spokesman.

The mission is to pave the way for Iraqi security forces to completely support themselves, he said.