Ever wonder what happens after you drop your letters in that mailbox? 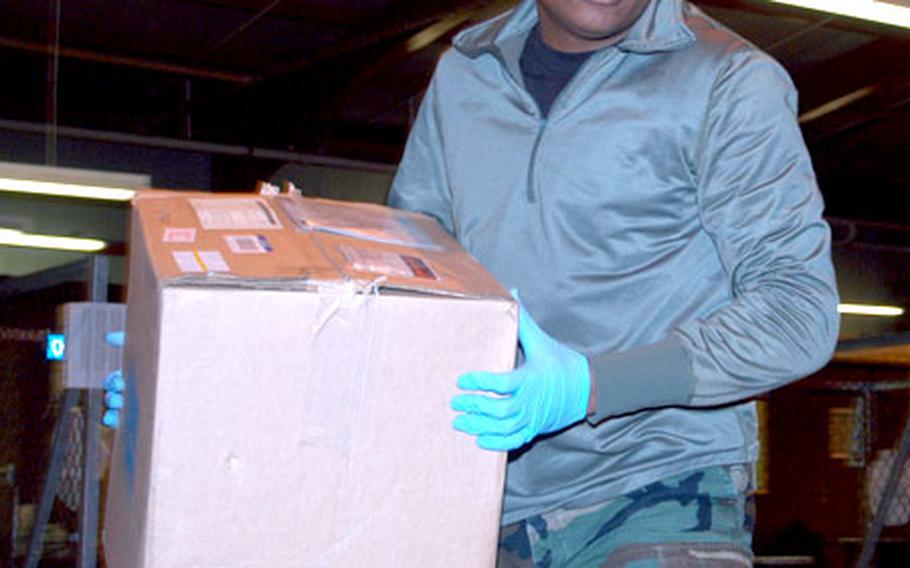 Staff Sgt. Everton Hixson, 24, sorts packages at the RAF Alconbury Area Mail Terminal, which is responsible for all the mail for U.S. military personnel in the United Kingdom. (Bryan Mitchell / S&S)

RAF ALCONBURY &#8212; Twenty-four thousand packages a month, thousands of letters a day and the occasional misplaced package of African narcotics. That&#8217;s what keeps the 17-person staff at the Alconbury Aerial Mail Terminal busy.

For its superlative efforts, the staff at the U.S. Air Force&#8217;s main postal facility in the United Kingdom was named the top AMT in all of Europe for 2005. It&#8217;s the fifth time the staff here has won the honor since 1998.

The mail terminal staff bustles throughout the day with arms full of envelopes, boxes, rucksacks and foot lockers in its warehouse facility on this quiet Air Force installation.

Once home to a fully functioning air strip and a Special Operations Group, RAF Alconbury has been toned down over the years to roughly 325 people whose primary role is to support the nearby Joint Analysis Center at RAF Molesworth.

The roar of the jets and the buzz of the choppers have long been silent, but the steady hum of the mail-sorting conveyor belt persists.

The mail follows a lengthy path on its route from the States to its final destination. In England, the Alconbury terminal is the hub through which it all goes in and out.

Coming in, the process is straightforward. First, all American mail is shipped to a main facility at Heathrow Airport in London where a staff of nine airmen permanently stationed in the capital ensure it is handled properly before a contractor hauls the mail to Alconbury.

While it is unloaded, British Ministry of Defence dog handler Bob Shaw employs Randy to sniff out potential bombs in the mail. The 9-year-old English springer spaniel occasionally stumbles upon firearms, but has yet to uncover any explosives, Sutherland said.

Shaw brings in a second dog, an 8-year-old Labrador mix named Dodie, to scour the goods for narcotics.

A few years ago, a package from a British national shipping the African drug khat wound up in the mail terminal by accident and the dog sniffed out the stimulant.

However, Sutherland said he&#8217;s not aware of any drugs being found in packages bound for or shipped by American servicemembers.

Here, in a warehouse sorting facility, the mail is separated by its final destination. Any package that may have opened during shipping is retaped before being shipped off again.

Going out, the mail from across the United Kingdom is consolidated at Alconbury, shipped to London, flown to the United States and ultimately delivered.

Sutherland said that including the destination address inside the package is highly recommended because some packages fall open in shipping. In some cases, the address is lost and the packages are waylaid in the dead mail waiting area until someone calls to claim their goods, he said.