Ever vigilant in Camp Liberty's watchtowers 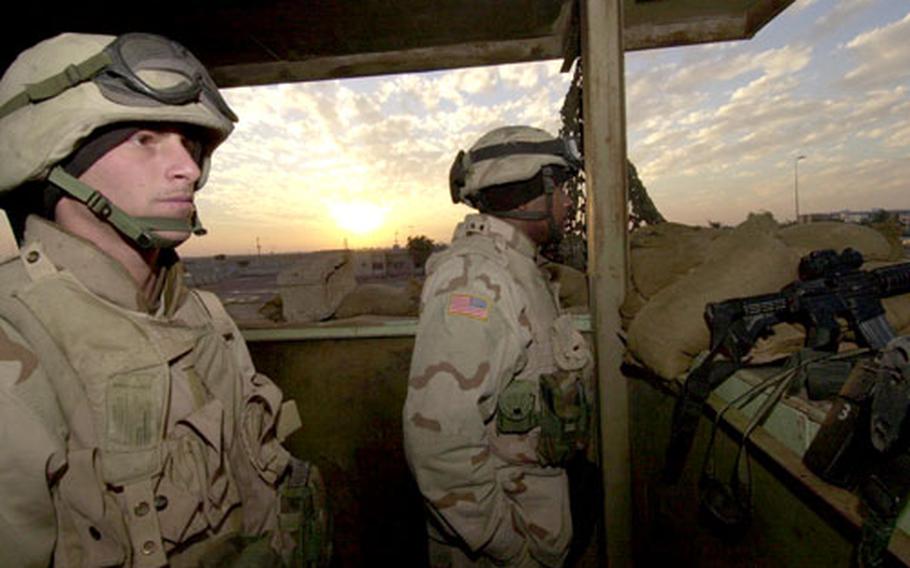 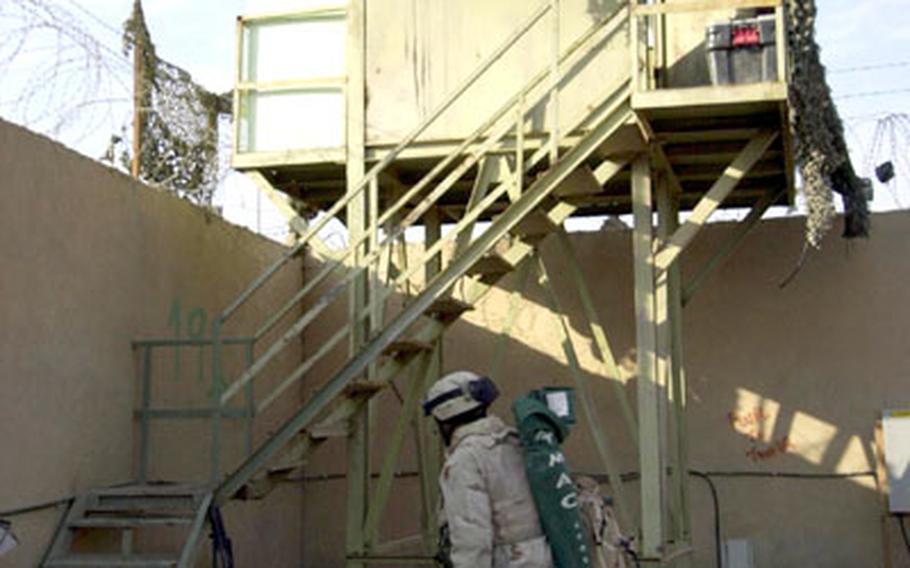 Pfc. Ronald Boudreaux, of Battery B, 1st Battalion, 141st Field Artillery Regiment, heads up to his post in a watchtower at Camp Liberty. (Joseph Giordono / S&S)

CAMP LIBERTY, Iraq &#8212; Down on the street, a pair of Iraqi men linger by the side of the road. One holds a shovel.

Nearby, another man fusses with a beat-up, stalled car, pushing it close to the side of the road and putting up the hood.

Up in the watchtower, Spc. John Basco and Pfc. Ronald Boudreaux note the behavior and radio it to their command post. Any other place, the activity would seem normal. But on the heavily traveled road next to the perimeter of a large U.S. base near Baghdad, everything is suspect.

The man with the shovel could be burying a roadside bomb.

The stalled car could hold a bomb, waiting for a passing U.S. convoy.

Eight hours a day, Basco and Boudreaux, of Battery B, 1st Battalion, 141st Field Artillery, man one of more than a dozen reinforced watchtowers along the perimeter wall. Other members of their battery, like many artillerymen in Iraq who have been shifted to other duties, man the other towers.

Basco and Boudreaux&#8217;s unit is known as the Washington Artillery, founded in New Orleans and now the oldest artillery battalion outside the 13 original colonies. Today, it&#8217;s part of the National Guard&#8217;s 256th Brigade Combat Team, serving a one-year tour in central Iraq. Other artillerymen from the unit work in the brigade&#8217;s detention facility and at base gates.

A typical shift on the tower is enough to keep the boredom away. The tower overlooks an agricultural college and is adjacent to an Iraqi police station; both military and civilian vehicles use the road between the two.

One of the first crews to man the tower, Boudreaux said, was attacked by insurgents with a rocket-propelled grenade; one soldier lost an arm in the fight. A few weeks back, says the 20-year-old from Gramercy, La., a backpack bomb was detonated at the police station, sending body parts flying into the street.

They&#8217;ve seen roadside bombs detonate and have watched a fierce firefight about 900 yards down the road. At night, they often hear mortar rounds hitting nearby.

Sometimes, children come close to the wall. One little girl threw a rose onto the top of the wall, which Basco saved and sent home to his wife. Another time, a group of kids tossed one of their photo albums up to the tower.

Inside, picture after picture showed the Iraqi family with a group of soldiers. It&#8217;s obviously from a less dangerous time &#8212; the soldiers are without weapons, helmets and body armor, eating meals with the family in their home. In one series of pictures, which Basco filmed with his own small video camera while paging through the album, the family presents a soldier with birthday cakes, candles and all. It&#8217;s a heartbreaking reminder for the soldiers in the tower that things weren&#8217;t always the way they are now.

On the street, a dozen men pile into a taxi van. A group of boys start teasing one another, which escalates into a shoving match.

Later, a convoy of armored vehicles rumbles by; the man with the stalled vehicle is still there. Nothing happens.

At sunset, the call to prayer echoes from a nearby mosque. Soon, it&#8217;s almost completely dark. The street lights on one side of the road don&#8217;t work; the traffic slows to a crawl, pedestrians head for home.

Basco and Boudreaux have five hours left on their shift, then another team relieves them. For them, the talk turns to football and the New Orleans Saints.