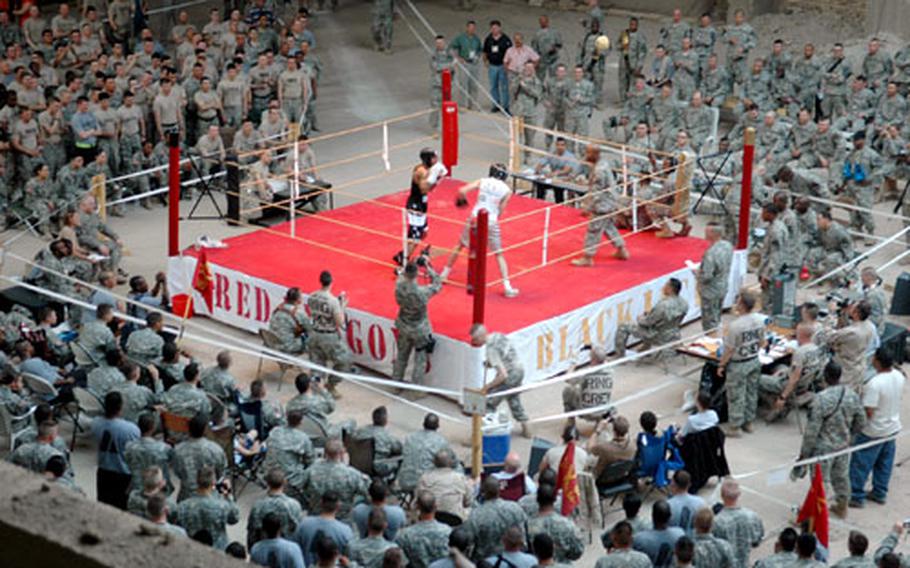 It was fight night for Black Jack &#8212; the 2nd Brigade Combat Team, 1st Cavalry Division &#8212; and more than 300 people had turned out at dusk last Friday for the first of five sparring matches over two weekends.

Ninety people had signed up to fight in nine different weight classes. The boxers had picked their trunk colors, their nicknames and their trainers. One sergeant used a chaplain for guidance in the corner. Another pugilist strode in as &#8220;The Fighting Irishman.&#8221;

Most, including four women, had trained for at least a month.

The brigade&#8217;s members had welded the ring together, hammered on the plywood, strung the ropes, and stuffed the corner pads. They had set rules: three two-minute rounds with a ring judge and medical staff on hand. A sound system pumped out music so loud many danced in the aisles. No one would admit whether bets were made.

And as the tournament began, the brigade&#8217;s commander stood at the center of the red ring, under the lights and under a black Stetson with a cigar in one hand and a pair of boxing gloves hanging from his shoulders. He quoted Don King: &#8220;Only in America!&#8221;

Except it wasn&#8217;t America. It was Baghdad, where 17 members of the brigade have died in six months, two last week. It&#8217;s where the Black Jack brigade patrols some of the most troubled parts of the city, including Haifa Street, a notorious strip on the western side where violence keeps rotating in year after year.

But lately, the violence in that sector has chilled, according to the man in the Stetson, Col. Bryan Roberts.

&#8220;I could take you down to Haifa Street right now,&#8221; Roberts said while watching one of his guys pummel another in the ring early in the evening. One of the brigade&#8217;s two joint security stations is in the heart of Haifa, and Roberts said the new model of putting U.S. and Iraqi soldiers inside the city to live and patrol is making a difference.

So, Roberts reasoned, it was time to approve a plan of another sort. The tournament had been on the brigade&#8217;s wish list before they deployed late last year, thanks to a few soldiers now dubbed the &#8220;ring crew.&#8221; But they ran out of time before leaving Fort Hood, Texas. Instead, they brought the show on the road.

And finally, when Montemayor took his swing at the captain, the crowd took over.

For three hours, they yelled and jeered at their friends and bosses. In return, the fighters stumbled punch-drunk, forgot to dance on their toes, burst gushers from each other&#8217;s noses.

All night the noise roared up the sides of the arena, a fifth-floor cavern inside a former Iraqi government building near the Green Zone. The building&#8217;s construction lay unfinished, the roof open. Fans watched from rooftops and rubble, and they screamed into the night.

Montemayor, a Golden Gloves boxer since he was a teenager, won by a technical knockout in the second round.