Marines look for an area to place their wreaths during Saturday’s Wreaths Across America event at Arlington National Cemetery. (Photos by Joe Gromelski, S&S)

Marines look for an area to place their wreaths during Saturday’s Wreaths Across America event at Arlington National Cemetery. (Photos by Joe Gromelski, S&S) 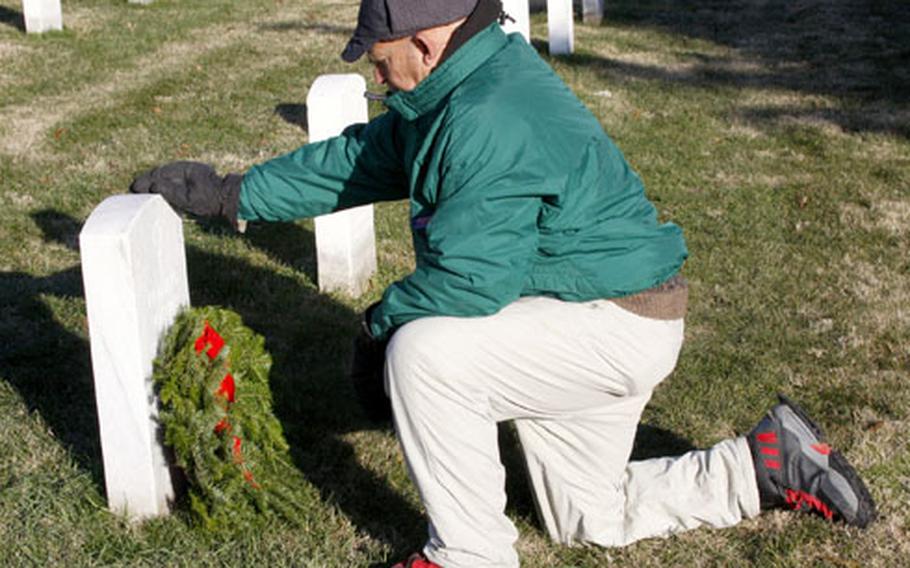 Ed Enamait pauses after placing a wreath on a grave at Arlington National Cemetery on Saturday. ()

(Note: Video at bottom of page.)

Javonte Green carefully placed a wreath on the headstone of a World War II soldier in Arlington Cemetery, nodded politely to the white headstone and gave the thumbs up sign.

Javonte was one of about 60,000 volunteers who placed wreaths in veterans cemeteries across the country as part of Wreaths Across America.

The project has grown exponentially since its inception back in 1992, when Morrill Worcester first donated the leftover greens from his wreath company to Arlington. Last year, volunteers placed 32,000 wreaths at state and national cemeteries across the country. This year, the number jumped to 105,000. The U.S. Senate formally recognized the event last week, declaring Dec. 13, 2008, "Wreaths Across America Day."

"It&#8217;s keeping memories alive that have long been forgotten," said Dick Amick of Chesapeake, Va. As a member of the Patriot Guard, Amick escorted the wreaths the full 750 miles from Harrington, Maine, to Arlington on his three-wheeled motorcycle. The weather this year was particularly bad for the weeklong trip.

"It was ice and snow the first day, 10 degrees the second day. The third day it was really brutal rain that soaked us," said Amick.

But the weather didn&#8217;t stop the procession. The two tractor-trailers containing the wreaths had a 50-vehicle escort at times as they made their way along smaller roads, stopping at veterans centers, local cemeteries, parks, fire stations and schools.

"I am awe-struck," said Willie Klein, who saw the convoy from his backyard in Harford County, Md. The convoy arrived at Arlington at dawn on Saturday.

"I&#8217;m really proud of it and the vets deserve it," said Worcester, who works with Arlington Cemetery officials to pick out a section to be decorated each year.

This year, the wreaths were placed in section 12, which contains older graves from World War I and II.

Organizers handed out stickers so volunteers could remember the name on the headstone they visited.

Javonte picked a World War II veteran&#8217;s headstone because it reminded him of his older brother, Joseph, who is currently serving in Iraq. "I think it&#8217;s important to remember."

Will he be coming back next year?

He will certainly not be alone.