Even in Iraq, touring comics manage to find new material 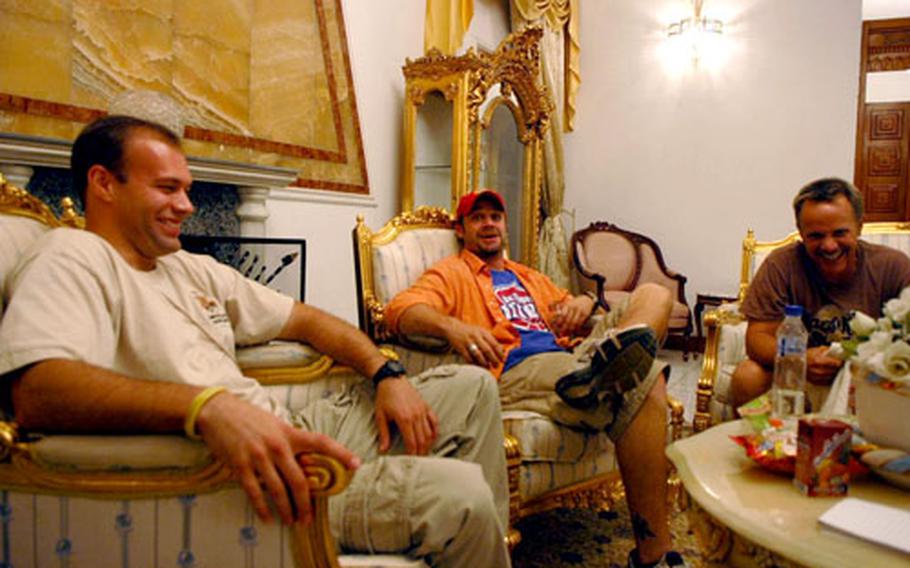 From left, comedians Keith Alberstadt, Dave Mishevitz and Tom Foss relax at Saddam Hussein’s former pleasure palace in Baghdad. The three have found plenty to laugh about amid the seriousness of Iraq. (Anita Powell / S&S)

Like earlier this month, when a comedy performance at a Baghdad-area base ended with an hourslong mortar attack on the base. Alberstadt and his four fellow comedians &#8212; all members of Comics on Duty, a stand-up comedy troupe currently on tour in Iraq and Kuwait &#8212; scurried into a bunker and waited for calm to prevail.

Days later, in the gaudy comfort of Saddam Hussein&#8217;s former hunting lodge on Camp Victory, Alberstadt and his colleagues joked &#8212; lamely &#8212; about their close call.

Such is the life of a roving comedian in Iraq: Onstage, the comedians elicit laughter and a flood of gratitude from soldiers. Offstage, chaos, uncertainty and the very unfunny realities of Iraq intrude.

The men say they shy away from discussing political issues when entertaining servicemembers.

Instead, he said, he focuses inward.

Fellow comic Dave Mishevitz, 33, of Ann Arbor, Mich., said he notes the absurdity of his surroundings.

Alternately, he joked, he wouldn&#8217;t mind going into the gravel business.

But all agree that the basic absurdity of Iraq is beyond any stand-up routine.