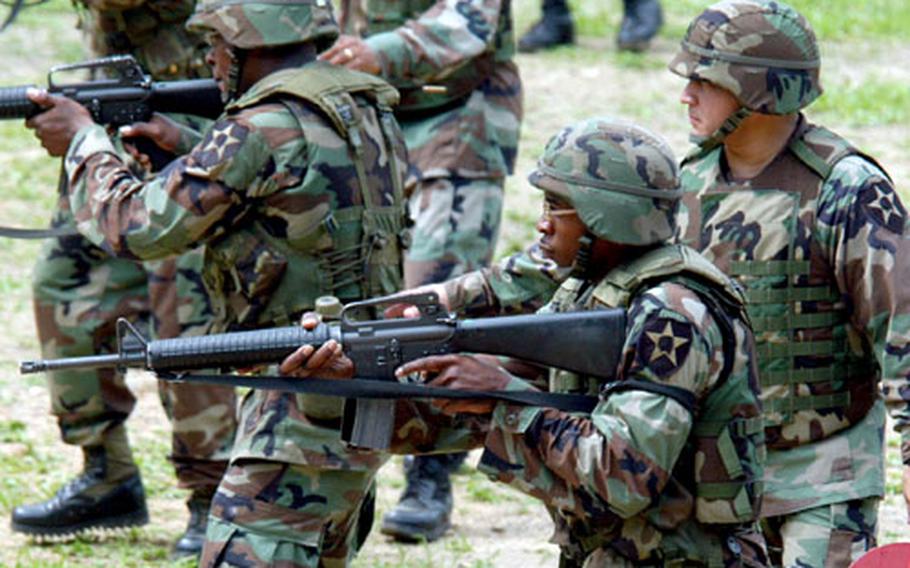 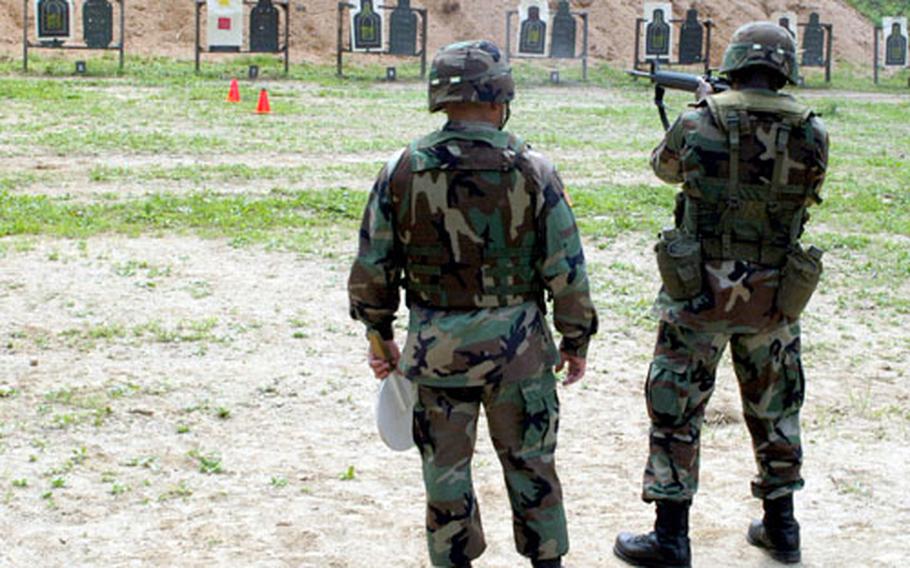 A soldier from the 2nd Infantry Division’s Special Troops Battalion fires at Camp Casey’s Ingman Range under the watchful eye of an instructor on Wednesday. The soldiers participated in the Close Quarters Marksmanship Competition. (Seth Robson / S&S)

CAMP CASEY, South Korea &#8212; You would think a target-shooting session would be a big yawn to a battle-hardened veteran who killed more than his fair share of enemy during the 2003 invasion of Iraq.

But Sgt. Michael Hayden, 26, who helped the 3rd Infantry Division smash the Iraqi Republican Guard that year, said he got a big buzz out of a Close Quarters Marksmanship Competition at Camp Casey&#8217;s Ingman Range on Wednesday.

Shortly after coming off the range, where he had been shooting at square and triangle targets in South Korea&#8217;s blistering summer heat, the Company B, Special Troops Battalion, 2nd Infantry Division soldier recalled clearing Sadaam Hussein&#8217;s palaces with 3rd ID.

The native of Fort Worth, Texas, was a forward artillery observer during the Iraq invasion and saw plenty of front-line combat, he said.

Soldiers received points for accuracy and speed during two attempts. The first involved shooting targets five to 25 yards away while walking, running and turning, he said. The second involved a stress shoot, where soldiers ran up a hill to collect ammunition, loaded their weapons, then ran, walked and crawled across the range and shot at targets through a door and from behind barriers, he said.

Time penalties were assessed for things such as running with a finger on the trigger, failing to switch weapons to safe before moving, putting a gun&#8217;s muzzle in the dirt while crawling, pointing a weapon at another soldier, not carrying a weapon in the &#8220;low-ready&#8221; position while moving and leaving magazines on the ground, Willard said.

The training will help soldiers survive an ambush or react to an improvised explosive device, he said.

&#8220;We are trying to get these soldiers familiar with using live rounds,&#8221; he said. &#8220;It is great seeing them learning something they might have to use in future if they get sent to Afghanistan or Iraq.&#8221;

Not all the troops involved in the competition were veterans.

Another Company B soldier sweating on the range, 20-year-old Pfc. Brian Hudson of Detroit, said he had never done anything like it before.

&#8220;The games teach you the basics of putting your sight on the target, but you don&#8217;t have to worry about muscle fatigue or your arm shaking so the sight is getting moved,&#8221; he said.