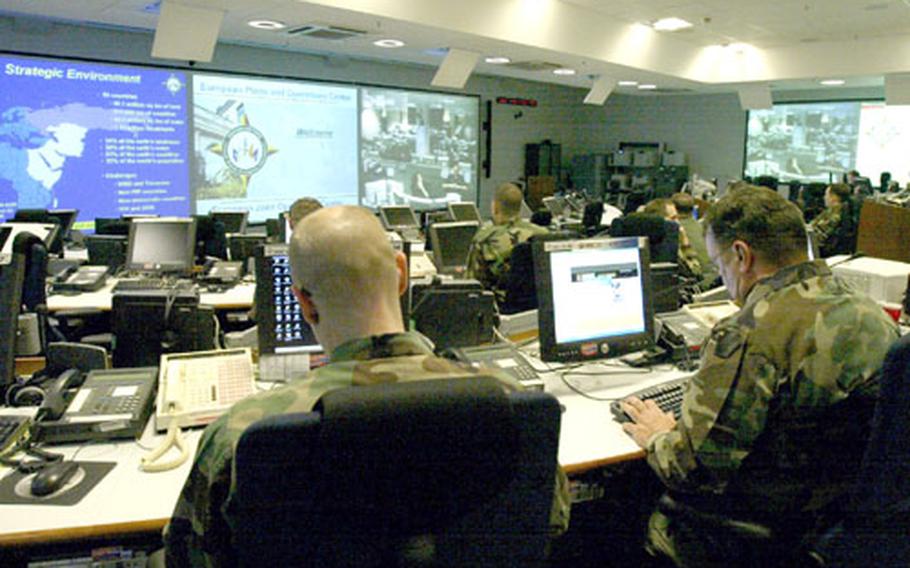 The Joint Operations Center, nerve center of the European Plans and Operations Center — located at Patch Barracks in Stuttgart, Germany — is like a multiscreen indoor ampitheater where servicemembers from all branches and specialties come together to manage crisis situations that occur within the U.S. European Command’s area of responsibility. (Gary Kieffer / Courtesy of U.S. Army)

The Joint Operations Center, nerve center of the European Plans and Operations Center — located at Patch Barracks in Stuttgart, Germany — is like a multiscreen indoor ampitheater where servicemembers from all branches and specialties come together to manage crisis situations that occur within the U.S. European Command’s area of responsibility. (Gary Kieffer / Courtesy of U.S. Army) 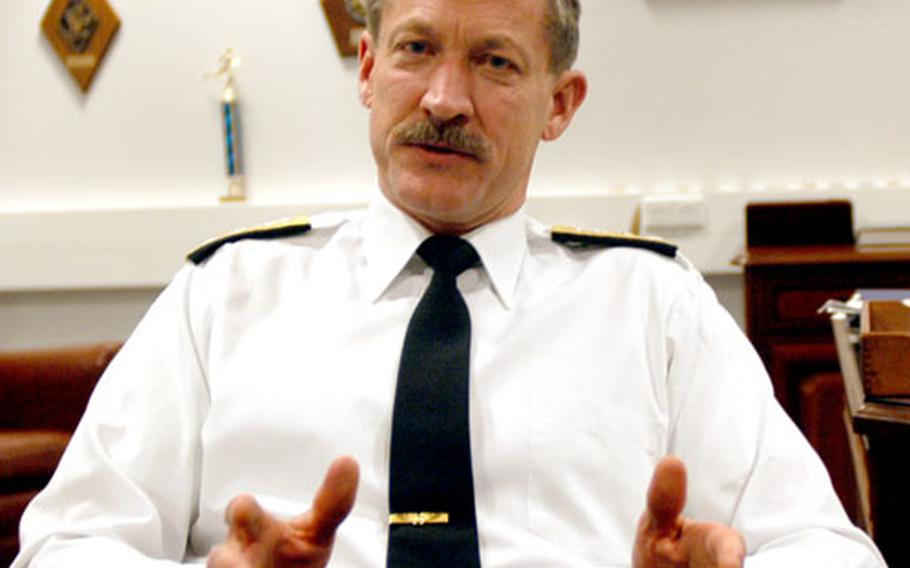 STUTTGART, Germany &#8212; The U.S. military is working on a more sophisticated way to win.

Instead of scoring an initial crushing military victory only to get mired in the aftermath, the U.S. European Command is pioneering a system to intervene in failing nations before war becomes an option.

The new approach is called &#8220;effects-based&#8221; warfare and brings to the table diplomats, country experts and economists to help fight the problems that can lead to war. Then, after the president or a military commander establishes a desired &#8220;effect,&#8221; the military and civilian experts plan the best way to achieve it.

&#8220;However, we are firmly convinced that you can and must engage on the other end [of the war-fighting spectrum]. We&#8217;ve been given the opportunity to expand on the &#8216;other-than-direct-war&#8217; responsibilities and expertise that we have. And we hope we can make the most of it.&#8221;

Last month, as a way of testing &#8220;effects-based warfare,&#8221; the center conducted a simulated rescue of an African nation that was about to implode. The weeklong exercise targeted a real country using real intelligence. Tallent declined to name the country, citing political sensitivities.

He also declined to give details about the impending chaos, for fear of revealing the nation. But he said the top priority for the unnamed country was to save its assets.

&#8220;Economic viability and security for all of that was a central point,&#8221; Tallent said. &#8220;If the country&#8217;s economic viability fails, then its legitimacy will fail. The ability of the government to support the people and have their respect fails.&#8221;

The exercise, called Flexible Leader &#8217;05, took more than one year to prepare. Diplomats, information specialists and economists from around the world were linked by secure Internet to EUCOM&#8217;s Joint Operations Center, a high-tech, multi-screen amphitheater on Patch Barracks.

The new technology allowed them to share thoughts, information and pictures simultaneously. The second phase of Flexible Leader &#8217;05 is set to resume in June.

The acronym EUCOM uses for its four-pronged approach is DIME, which stands for diplomacy, information, military and economic. In the past, the U.S. government sometimes used too much of the military portion of the approach and not enough of the other elements, said Marine Col. Dave Beydler of EUCOM&#8217;s Joint Training, Readiness and Exercises division.

He added that the military&#8217;s proficiency sometimes outpaces the diplomatic, information and economic elements needed for victory.

EUCOM hopes to be the first major command to establish a full-bore Joint Interagency Coordination Group, a team of government and military agencies capable of intervening in troubled nations.

Army Col. Kevin Wright, who is helping develop the team, said the attacks of Sept. 11, 2001, helped put the concept on the fast track. Wright expects to file a plan by January with his superiors, the next step toward getting the concept funded.

Eventually, Wright said, a fleet of military officers might be needed to help bridge gaps between the different cultures of the departments of Defense, State, the Treasury and others.

Effects-based operations could then become the norm, especially in less-developed countries in Africa, Eastern Europe and Southwest Asia.

&#8220;The JICG is [now] a bit of a pickup team,&#8221; Wright said, adding that servicemembers eventually may be trained to work with other agencies better.