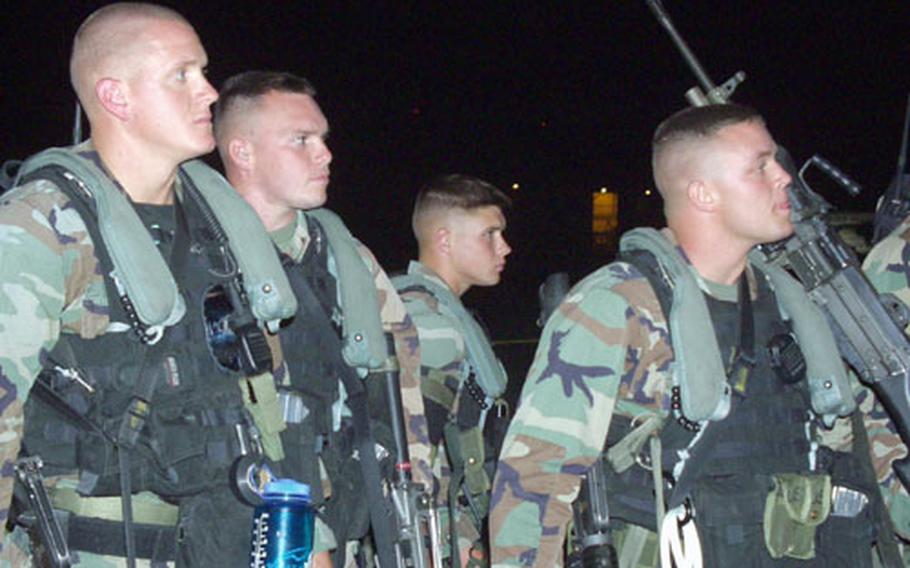 NAVAL STATION ROTA, Spain &#8212; In what could be the first step toward a broader U.S. mission in beleaguered Liberia, a U.S. military survey team arrived in the capital of Monrovia to begin its fact-finding mission.

More than a dozen members of the Humanitarian Assistance Survey Team, or HAST, flew from Naval Station Rota in southern Spain to West Africa early Monday morning along with a team of heavily armed Marines.

The advance team will pave the way for a possible humanitarian operation and is composed of military members from U.S. bases across Europe. Most of the personnel are from the Navy&#8217;s Europe headquarters in London.

How long the specialists will be in the country has not been determined, but Navy spokesman Lt. Corey Barker said Sunday that an assessment &#8220;will be made as soon as possible.&#8221;

President Bush is mulling over whether U.S. troops should join an international peacekeeping force formed to end three years of fighting between President Charles Taylor&#8217;s government and rebel forces.

Taylor has been indicted by a U.N.-backed war crimes court in Sierra Leone. He said Sunday he would step down and take exile in Nigeria, but urged the United States to send peacekeepers to ensure an orderly transition.

Taylor gave no time frame for when he would quit power and he did not specify whether the deployment of a peacekeeping force was a condition for his departure.

White House spokesman Jimmy Orr said: &#8220;What the president has said is Mr. Taylor needs to leave and leave soon. He needs to leave so peace can be restored.&#8221;

Survey team members backed by Marines from the Rota-based Marine Corps Security Force Company Europe flew to Liberia in a C-130 transport plane &#8212; a trip that was expected to last nearly nine hours.

Additional Marines with the company remain on call ready to deploy to Liberia if more security is needed at the U.S. Embassy or if the situation worsens and the remaining Americans must evacuate.

Prior to leaving for Liberia, members of the survey team qualified to shoot a 9 mm handgun for extra protection. While U.S. commanders plan to send additional personnel, the team leader will determine the final composition.

The U.S. military forbid members of the survey team or the Marines from talking to the media before leaving.