Army. Lt. Gen. John B. Sylvester gets a smooch from his wife, Becki, during Monday&#39;s award and departure ceremony at Patch Barracks in Stuttgart, Germany. Sylvester, chief of staff for the U.S. European Command, was retiring after 37 years in the Army. At left, leading the cheers is Air Force Gen. Charles Wald, the EUCOM deputy commander. (Charlie Coon / S&S) 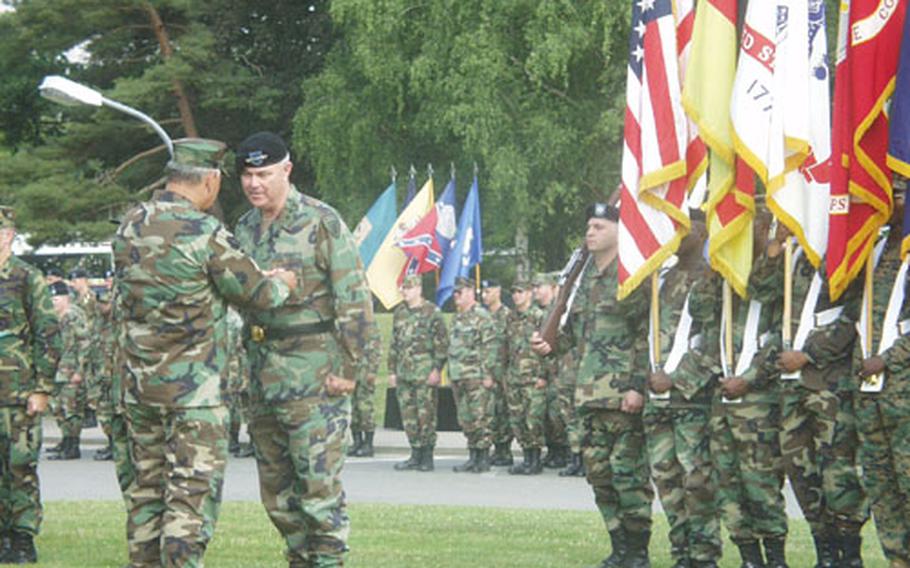 STUTTGART, Germany &#8212; When asked what made him most proud about his career, Army Lt. Gen. John B. Sylvester promptly answered: &#8220;I never served a single (permanent duty) day in the Pentagon.&#8221;

On Monday, Sylvester, the chief of staff of the U.S. European Command, was honored in a 30-minute ceremony at Patch Barracks to commemorate his retirement. Sylvester was awarded the Defense Superior Service Medal at the event, but mostly he was paid respect for a lifetime of military service.

Sylvester said his speech, titled &#8220;I Am a Soldier,&#8221; by an unknown author, was to thank the troops he had worked with in the past and remembered the ones still out on the battlefield.

Then he recalled another war quotation, by a lower-ranking U.S. officer who was asked for his credentials by a surrendering German general. &#8220;These are my credentials,&#8221; the American replied, motioning to the soldiers behind him.

Sylvester grew up an Army brat, son of Lt. Col. George Sylvester, a company commander in the 95th Infantry Division, the &#8220;Iron Men of Metz,&#8221; who captured one of the last German army strongholds in France during World War II.

Sylvester worked his way up from private to sergeant and through the officer ranks from second lieutenant to lieutenant general. The younger soldiers in Monday&#8217;s audience seemed to appreciate Sylvester&#8217;s style.

&#8220;I didn&#8217;t work with him personally but used to see him at the gym; that gave me more inspiration and motivation,&#8221; said Sgt. 1st Class James Baker of Chicago and the EUCOM Office of Manpower, Personnel and Administration.

Since becoming EUCOM chief of staff in November 2002, Sylvester helped plan U.S. military efforts in northern Iraq as well as shift EUCOM&#8217;s focus south to Africa and east to the Middle East and former Soviet-bloc nations.

Sylvester said he planned to take a civilian job in the Washington area, but not until after he and his wife, Becki, spend a few weeks in Africa on a photographic safari.