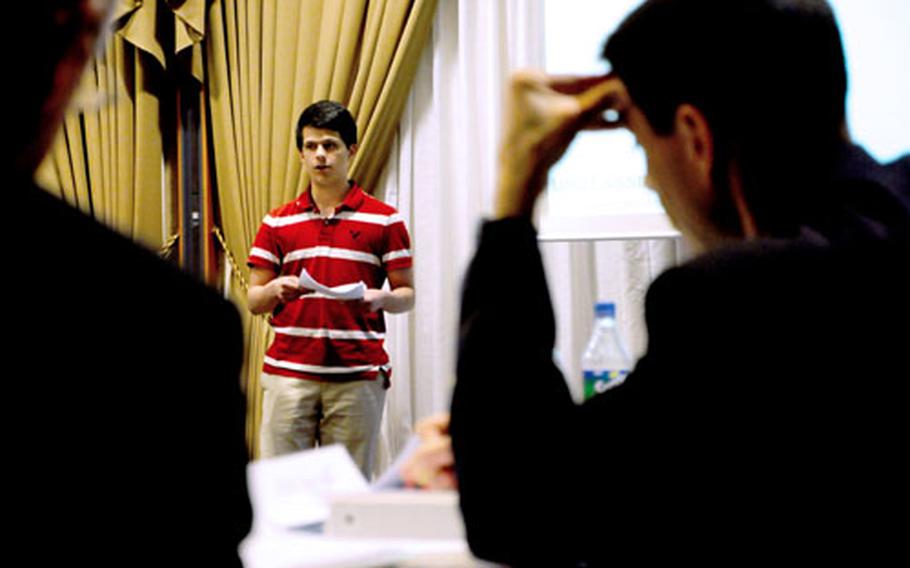 Sean Conderman, an 18-year-old Department of Defense dependent living in Heidelberg, presents the top issues from the teen focus group during the U.S. European Command&#39;s Quality of Life Conference on Thursday in Garmisch. (Warren Peace / S&S)

GARMISCH, Germany &#8212; Too many troops, spouses and teens are fighting weight problems, according to delegates at this week&#8217;s 2010 Quality of Life Conference. And they want U.S. European Command leaders to take on the issue.

Calling herself &#8220;a poster child for obesity,&#8221; Moseley pointed out that there are few options on base for those who want to eat healthy. When the dining facilities are closed, the only real quasi-healthy option in Subway, she said.

According to Tricare, the military&#8217;s health care system, more than 16 percent of active-duty servicemembers who receive care at military medical facilities fall within the national Centers for Disease Control and Prevention&#8217;s criteria for obesity. Also, 34 percent of non-active-duty beneficiaries are obese &#8212; 4 percent higher the U.S. national average. And, nearly 19 percent of teen dependents are obese.

Each year, delegates from bases throughout Europe meet to explore a host of quality-of-life issues affecting soldiers and families. By week&#8217;s end, specific problem areas are identified, with participants offering a series of recommendations on how to make improvements. The problems are then worked on by senior EUCOM staff during the course of the year.

Other recommendations from this year&#8217;s conference include establishing a joint medical permanent-change-of-station review process for exceptional family members, and providing funding for a second vehicle shipment for those who move overseas.

For the second straight year, the teen group of delegates offered their unique perspective. Their suggestion: establish a joint EUCOM teen panel.

&#8220;The Army already has a teen panel, but the voices of young dependents from other branches are not being heard,&#8221; Conderman said.

&#8220;I think the teen group is vital,&#8221; said Col. Michael Godfrey, the director of manpower, personnel and administration for EUCOM. &#8220;They had good insight. These teens come and they go through a process that is no different than the adults go through.&#8221;

Officials said they are happy with the evolution of the conference and see it continuing for years to come.

&#8220;I am sure there are cynics out there that think the quality-of-life conference is expensive and we should be spending our money on other things,&#8221; Godfrey said. &#8220;To not continue it, would create pervasive problems that are unsolvable in the future because nobody is paying attention.&#8221;

Last year, delegates recommended that EUCOM establish a Mental Health Bill of Rights, which would include a command policy letter, make mental health awareness part of the EUCOM training inventory, and require leaders to consult with health care providers before determining what kind of personnel action could be needed.

The Bill of Rights was adopted by EUCOM earlier this year.

The suggestion box ...Recommendations from the European Command Quality of Life Conference held this week in Garmisch, Germany.