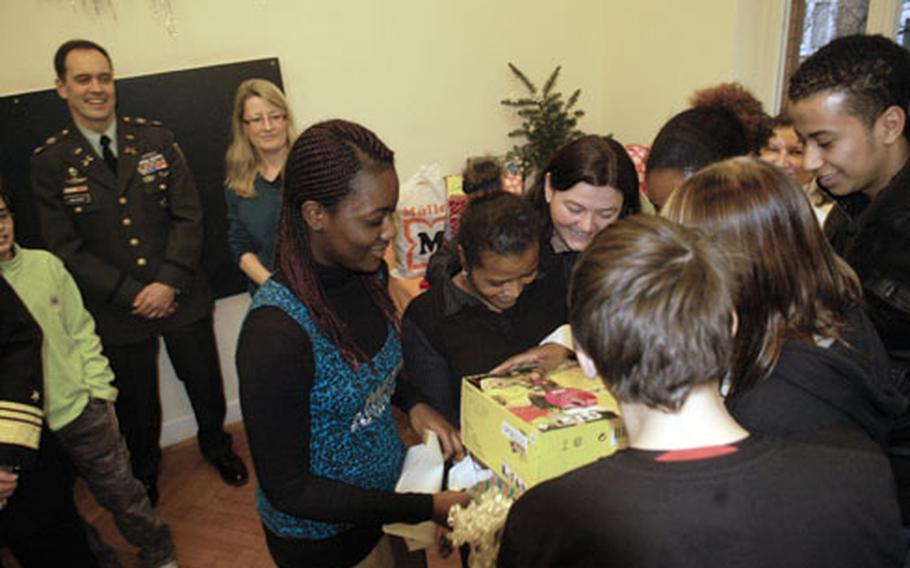 Teenagers get what they had been hoping for — a Game Boy karaoke singing machine. Stuttgart’s youth services department works with children up to the age of 16. (Photos by John Vandiver/S&S)

Teenagers get what they had been hoping for — a Game Boy karaoke singing machine. Stuttgart’s youth services department works with children up to the age of 16. (Photos by John Vandiver/S&S) 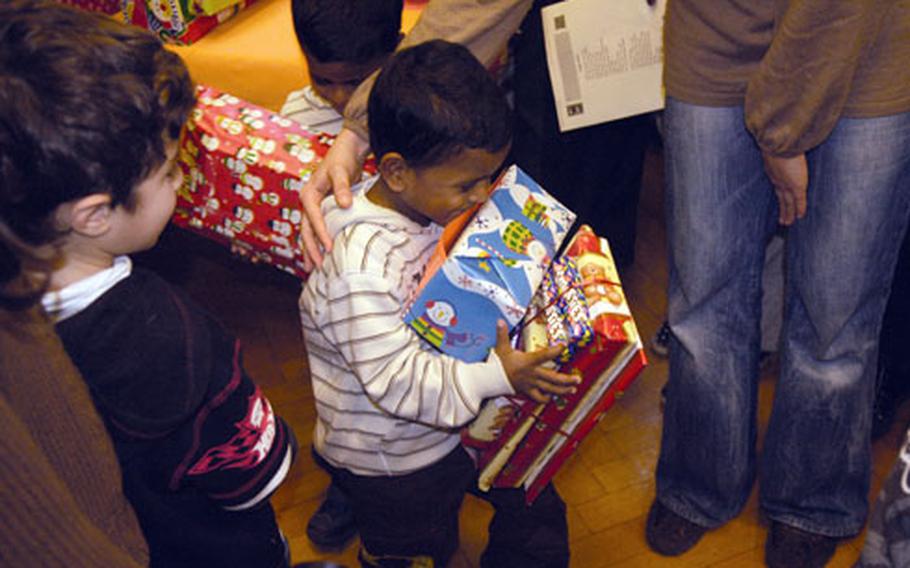 A youngster from Stuttgart struggles to carry all of his presents ()

STUTTGART, Germany &#8212; The little ones waited patiently for the grown-ups to finish with the formalities.

At an orphanage in Stuttgart&#8217;s Bad Cannstatt district, a pile of gifts donated from U.S. European Command staff and families was there for the unwrapping. But first the dignitaries needed to say a few words. Perhaps some of the children even followed along as German and U.S. officials talked about the close ties between the two communities.

The group of youngsters nodded.

But after the remarks and a couple of Christmas carols, U.S. Navy Vice Adm. Richard K. Gallagher cut to the chase.

"I think we came to bring a little Christmas spirit today," said Gallagher, who handed out the first gift at the children&#8217;s orphanage in Bad Cannstatt.

The gift&#8212;a Game Boy singing machine&#8212;went to a group of smiling young teenagers. After that, the little ones streamed in for the presents with their names on them. There was more than enough to go around.

More than 300 gifts were delivered to local needy children and families as part of a EUCOM community outreach initiative. The gift-giving project is in its third year, and each year the effort has grown, said Gallagher, EUCOM&#8217;s deputy commander.

"This was just a chance for us to join you at a special time," Gallagher told the group of children and youth service workers.

From Game Boy machines and books to CDs and electronic equipment, some of the youngsters walked off with a stack of presents.

Franz Josef C&#228;mmerer, director of Stuttgart&#8217;s youth services department, said the donations help at a time when resources for extras things, such as presents, are limited.

"Your donations help alleviate our aid funds, since especially now during Christmas season we see that in many families whom we care for, there are not financial resources available to give children the presents they want," C&#228;mmerer said.

This year, EUCOM officials were able to take some requests before making purchases in an effort to better meet the needs of the children.

"They are children and families who are not well off materially, and who are not exactly on the sunny side of life," C&#228;mmerer said.