Gen. Curtis M. Scaparrotti testifies at a Senate Armed Services Committee confirmation hearing on his nomination to serve as commander of the U.S. European Command, April 21, 2016 on Capitol Hill. (Joe Gromelski/Stars and Stripes)

Gen. Curtis M. Scaparrotti testifies at a Senate Armed Services Committee confirmation hearing on his nomination to serve as commander of the U.S. European Command, April 21, 2016 on Capitol Hill. (Joe Gromelski/Stars and Stripes) 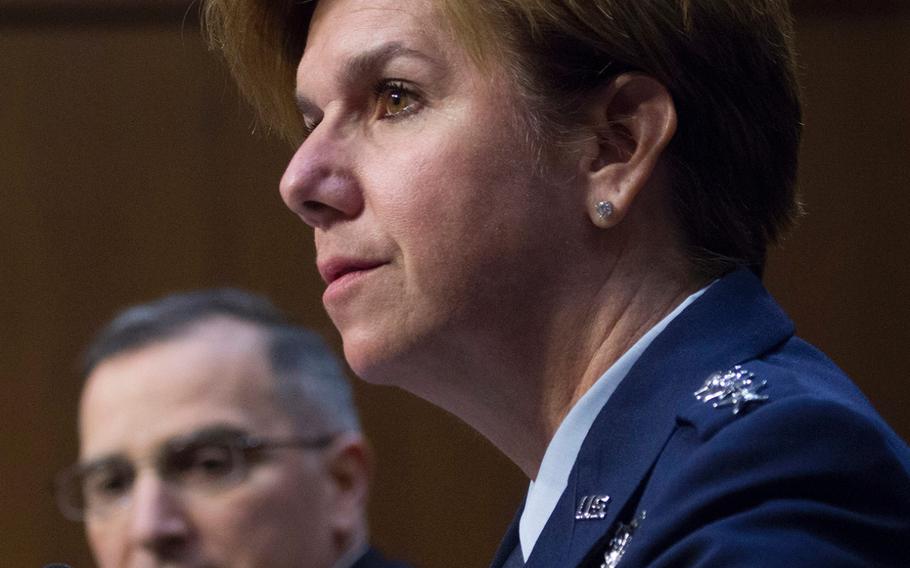 U.S. Army Gen. Curtis M. Scaparrotti, tapped to lead U.S. troops in Europe, said Thursday he favors permanently stationing a heavy-armor brigade on the Continent to deal with the threat posed by a resurgent Russia.

“A permanently stationed armored brigade in Europe would be best,” he said during a confirmation hearing before the Senate Armed Services Committee.

Scaparrotti, who now commands U.S. forces in Korea, called Russia the top threat facing the U.S., and he said Moscow should be delivered a sharp warning to keep a distance from U.S. forces operating in the region.

At present, only two brigades are permanently stationed in Europe, the Vicenza, Italy-based 173rd Airborne Brigade and the 2nd Cavalry Regiment out of Vilseck, Germany.

Last week, Russian fighter jets over the course of several days buzzed a U.S. warship patrolling in the Baltics and barrel-rolled a U.S. reconnaissance aircraft flying in the area, prompting protests from U.S. officials.

When asked whether America should draw a line with Moscow and make clear that such direct confrontation could prompt a military response, Scaparrotti said, “We should engage them and make clear what is acceptable operations of both our forces in close proximity. And once we make that known we have to enforce it.

“We should keep everything on the table.”

If he is confirmed, Scaparrotti, will replace retiring Gen. Philip Breedlove at the helm of U.S. European Command and as NATO supreme allied commander. He will come to Europe at a time of turbulence. In addition to a more aggressive Russia, he faces growing concerns about terrorism and instability fueled by the migrant crisis spilling into Europe from Syria.

In response to Russia’s intervention in Ukraine two years ago, the U.S. has strengthened its posture on the Continent, sending rotational forces to Poland and the Baltics, areas with a history of concern about Russian intentions. Still, adding a third permanently stationed Army brigade in Europe would provide more stability for U.S. training missions than rotational forces and would send a signal of commitment to the region, Scaparrotti said.

At issue is whether the Army has the resources to commit an additional brigade on a permanent basis, which the general said he would examine.

“I’ve got to look at the service’s situation,” he said.

Scaparrotti offered a defense of the NATO alliance, a frequent target of criticism in the U.S. because of the view that Europeans underinvest in their own defense. For example, Republican presidential frontrunner Donald Trump has said he would consider withdrawing the U.S. from the NATO. Scaparrotti countered that Russian President Vladimir Putin would be the bigger winner if the U.S. pulled out of the transatlantic alliance.

Air Force Gen. Lori Robinson, who leads the service in the Pacific and is tapped to lead U.S. Northern Command, also testified Thursday.

Robinson, who, if confirmed, would be the first woman to lead a combatant command, said she would look for ways to better coordinate with U.S. agencies on the southern border, where there is increased concern about the flow of heroin and other narcotics into the U.S. Robinson also named Russia as the main foreign threat and homegrown terrorists as a top areas of focus.

“Defense of the homeland is a sacred responsibility and the No. 1 mission of the Department of Defense,” she said.