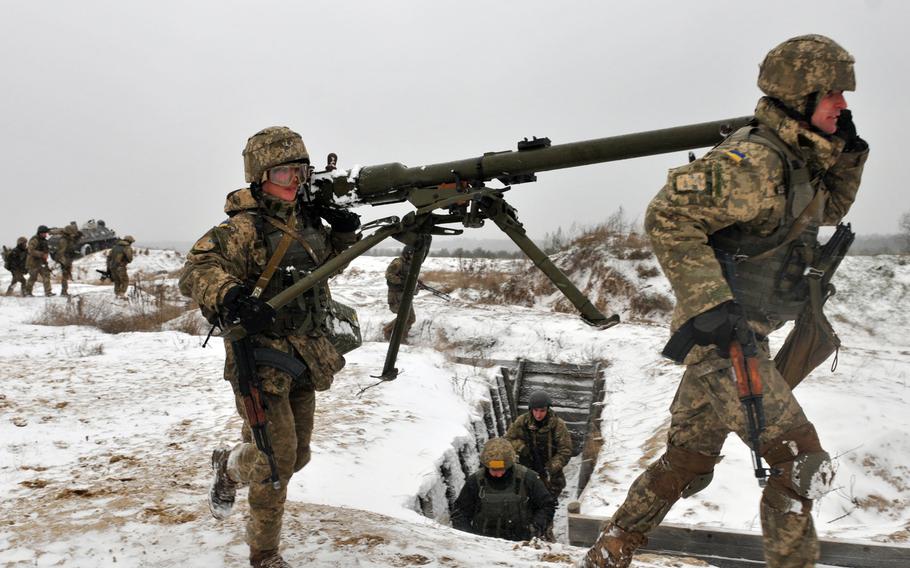 STUTTGART, Germany — U.S. European Command called for an immediate cease-fire in eastern Ukraine as heavy fighting threatens a larger humanitarian crisis in a country where U.S. forces continue a mission aimed at beefing up the nation’s military forces.

“We remain concerned with the violence in eastern Ukraine and continue to call for an immediate end to Russia’s occupation of Crimea and for Russia to cease its destabilizing actions in Ukraine and fulfill its commitments in the Minsk agreements,” EUCOM said in a statement late Wednesday.

The Minsk agreement set the terms for a cease-fire and called on both sides to withdraw troops and military equipment from eastern Ukraine.

In recent days, violence has flared in the city of Avdiivka. According to reports, 10 Ukrainian soldiers have been killed, and there are widespread power outages in frigid temperatures. Thousands of civilians are without water, heat or electricity as a result of the fighting.

“To avert a larger humanitarian crisis, we call for an immediate, sustained cease-fire and full and unfettered access for OSCE monitors,” EUCOM said, referring to the Organization for Security and Cooperation in Europe.

Ukraine’s Foreign Ministry said Russian-backed fighters have deployed a variety of artillery and tanks, which would violate a cease-fire deal that restricts the use of heavy weaponry in contested areas. The rebels have accused Ukrainian forces of launching attacks in order to gain territory.

“We request our international partners to step up political and diplomatic pressure on the Kremlin to stop dangerous escalation in Donbas and avoid a humanitarian catastrophe in the region,” Ukraine’s Foreign Ministry said in a statement.

While the violence in Ukraine has prompted condemnations from many Western governments and institutions, including NATO, the White House has so far been mum on the matter. President Donald Trump has emphasized that improving relations with Russia is a top foreign policy priority. That has raised questions about whether the U.S. will continue to advocate for Moscow’s withdraw from Ukraine.

On Wednesday, the U.N. Security Council expressed deep concern over the situation and urged both sides to end the violence. Both Russia and Ukraine voted for the Security Council statement, which condemned the fighting, saying it had a severe impact on the civilian population.

In 2014, Russia annexed Ukraine’s Crimea peninsula, a move that altered security perceptions across Europe, led to NATO’s expanded military presence in the Baltics and resulted in a series of sanctions against Moscow.

In December, Gen. Curtis M. Scaparrotti, who leads U.S. forces in Europe, made a rare visit to eastern Ukraine to meet with troops on the front lines. The U.S. is investing $150 million to train and equip Ukrainian forces, which comes on top of $250 million spent on nonlethal aid in 2015. While Washington has provided night-vision equipment, counter-radar technology, body armor and vehicles, it has stopped short of delivering weaponry, something Ukraine’s leaders have long sought.

The U.S. now has about 350 troops conducting training in western Ukraine, where personnel are working to train up to six battalions of Ukrainian conventional and special operations forces.