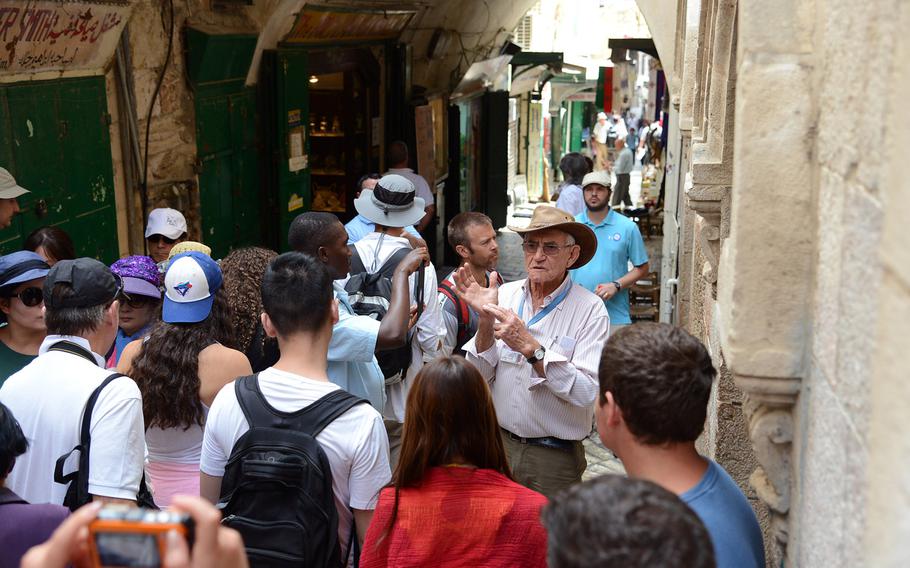 A tour group visits Jerusalem's Old City along the Via Dolorosa. U.S. European Command said Monday, Dec. 2, 2019, it has lifted an order restricting travel there, but American military personnel are still prohibited from visiting other parts of the West Bank, including Bethlehem and Jericho. (Michael Abrams/Stars and Stripes)

U.S. European Command has lifted travel restrictions for military personnel to the Old City of Jerusalem, but maintained a ban on visits to other parts of the West Bank, including Bethlehem and Jericho, it said Monday.

The lifting of the travel ban partially reverses an order issued last month, restricting travel to all of Israel’s West Bank.

EUCOM follows the guidance of U.S. embassies when deciding to impose or lift travel restrictions, it said.

The embassy in Israel last month announced restrictions on travel to the entire West Bank, citing possible unrest after the United States changed its policy toward Israeli settlements there. Days later, the embassy lifted the travel restrictions to the Old City, with the exception of areas near and inside Damascus Gate, Herod’s Gate, Lion’s Gate and Chain Gate, a statement on its website said.

Israel attracts visitors from around the world, including U.S. troops stationed in Europe and the Middle East, particularly during the Christmas season.