EUCOM: Huge U.S.-Israeli exercise not linked to tensions with Iran 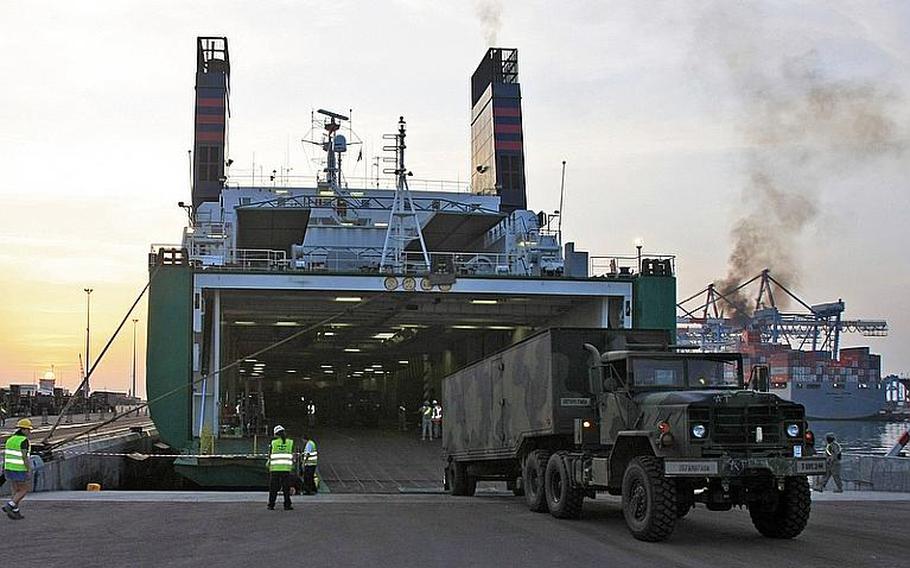 U.S. Army Europe troops offload missile launchers and other equipment at Israel's Port of Ashdod in advance of a missile defense exercise with Israel in 2009. (Photo courtesy Israeli Defense Forces)

U.S. Army Europe troops offload missile launchers and other equipment at Israel's Port of Ashdod in advance of a missile defense exercise with Israel in 2009. (Photo courtesy Israeli Defense Forces) 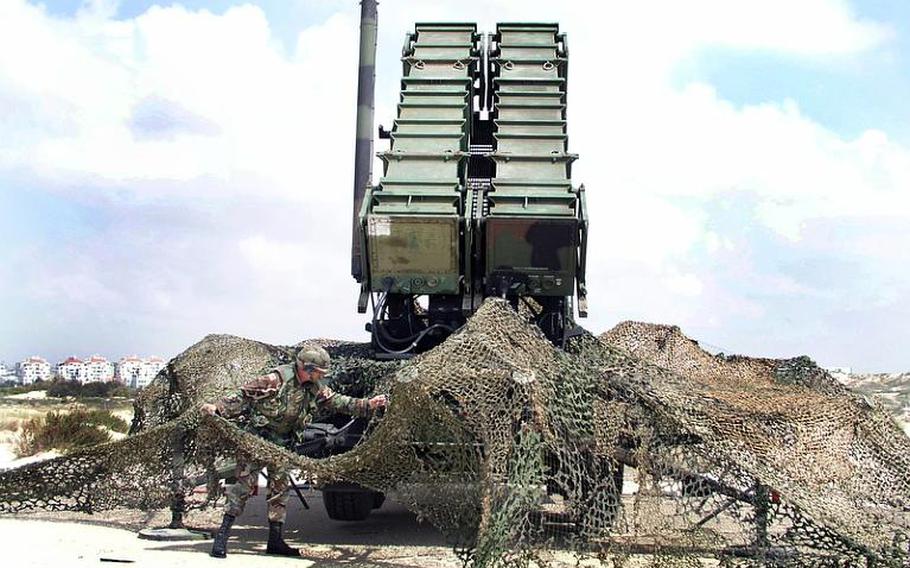 A soldier from V Corps&#39; Alpha Battery, 5th Battalion 7th Air Defense Artillery, positions a Patriot missile launcher in Tel Yona, Israel, as part of field training supporting exercise Juniper Cobra in 2005. A similar exercise is to be held in Israel this year and comes at a time of heightened tensions between Israel and Iran. (Elizabeth Hibner/U.S. Army)

HEIDELBERG, Germany &mdash; What&rsquo;s being billed as the biggest and most significant military exercise ever conducted by the U.S. and Israel will include missile defense drills, according to the U.S. European Command.

EUCOM officials declined to say when the Austere Challenge 12 exercise would begin, but the timing of the announcement of the exercise in the Israeli press, which cited unnamed Israeli Defense Forces officials, has led to speculation that it is linked to renewed tensions with Iran over its nuclear ambitions and its recent threats to close the Strait of Hormuz, through which almost 20 percent of the world&rsquo;s oil is transported.

But there is no direct connection, according to the U.S. European Command.

The exercise has been long-planned, &ldquo;part of a routine training cycle designed to improve the interoperability of our air defense systems, and not in response to any real-world event,&rdquo; said EUCOM spokesman Air Force Capt. John Ross. &ldquo;It takes quite a bit of planning. For this one, it&rsquo;s been about a year and a half.&rdquo;

EUCOM will not say what military exercises beyond missile defense will be included in Austere Challenge. An annual EUCOM exercise previously held in Germany with NATO partners, Austere Challenge in the past has rehearsed full spectrum operations &mdash; a &ldquo;swiftly-defeat-the-effort campaign involving a medium-to-high intensity combat operation in response to a crisis,&rdquo; according to a EUCOM spokesman in 2006.

&ldquo;It&rsquo;s a classified exercise, and we can&rsquo;t release even small details about it,&rdquo; Ross wrote in an email.

In November, Andrew J. Shapiro, State Department assistant secretary for political-military affairs, mentioned the exercise in a speech in Washington, saying that more than 5,000 U.S. and Israeli forces would simulate the ballistic missile defense of Israel and that the exercise would be &ldquo;by far the largest and the most significant exercise in U.S.-Israeli history.&rdquo;

The U.S. and Israel have conducted joint missile-defense exercises named Juniper Cobra in Israel every two years since 2001. This year, Juniper Cobra is to be part of Austere Challenge, Ross said. In 2009, it was held in October, with more than 1,000 U.S. troops.

Ross said that exercises are always evolving, and could only provide this statement:

&ldquo;U.S. European Command and the Israel Defense Forces periodically conduct routine exercises in Israel. These exercises, which are in the context of a long-standing strategic partnership, are planned in advance and part of a routine training cycle designed to improve the interoperability of our air defense systems,&rdquo; the statement said. &ldquo;Every time we train together is an opportunity to improve our capabilities.&rdquo;

Still, recent news reports pegged the upcoming exercise to rising tensions with Iran, as the U.S. is attempting to persuade China to go along with tougher new sanctions against Iran, including an oil embargo the European Union is expected to confirm later this month.

On Wednesday, an Iranian nuclear expert was killed in a bomb attack. Other scientists have been killed in mysterious circumstances in recent years.

News reports last week, attributed to unnamed Israeli military officials, said the exercise would test multiple Israeli and U.S. air defense systems against incoming missiles and rockets. Reports on when the exercise would begin varied, from &ldquo;the next few weeks&rdquo; to &ldquo;April.&rdquo;

Ross would not say when the exercise would take place, other than &ldquo;later this year.&rdquo;

Last month, the Jerusalem Post reported that the exercise would involve &ldquo;thousands&rdquo; of U.S. troops, and include the establishment of U.S. command posts in Israel and IDF command posts at EUCOM headquarters in Germany.

The ultimate goal, the Post reported, was &ldquo;establishing joint task forces in the event of a large-scale conflict in the Middle East.&rdquo;