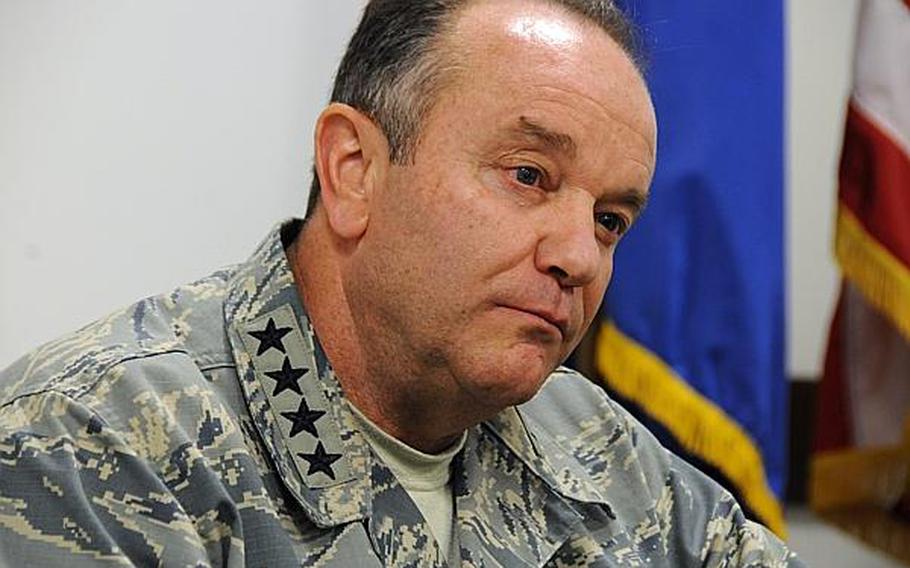 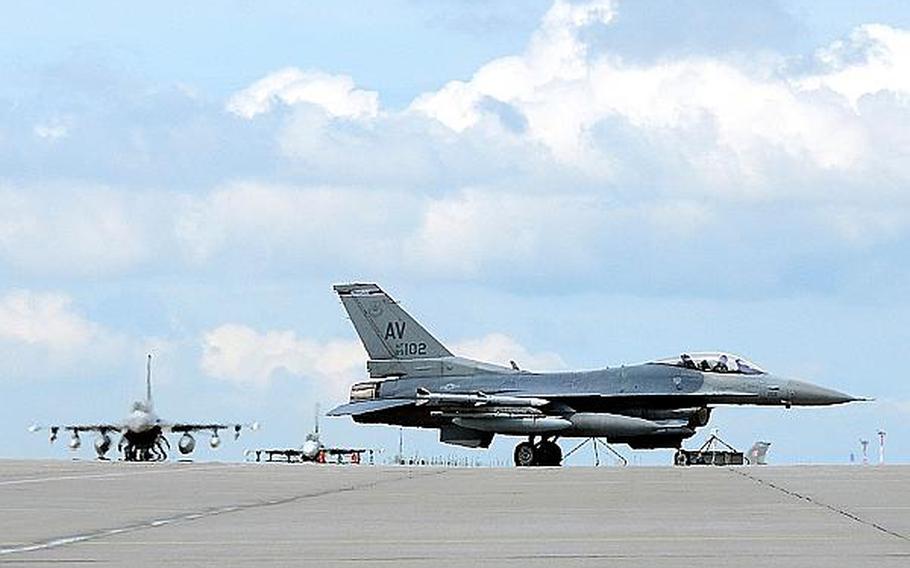 U.S. Air Force F-16 Fighting Falcon fighter aircraft taxi off the flightline at Lask Air Base in Poland July 12, 2013. The six aircraft are from Aviano Air Base, Italy, and are participating in the third aircraft rotation to Detachment 1, 52nd Operations Group. The aviation detachment is part of an effort to strengthen Polish and U.S. ties. (Daryl Knee/U.S. Air Force)

The aviation detachment survived the first round of budget cuts, and there are no plans on the horizon to downsize the mission at Lask Air Base in Poland, Breedlove told reporters during a conference call.

“We are getting great results,” Breedlove said. “We intend to stay with this round of exercises.”

On Friday, six F-16 aircraft from 510th Fighter Squadron based at Aviano Air Base, Italy completed a two week exercise at Lask —the third rotation of U.S. aircraft since the Poland detachment launched in November 2012.

A small U.S. team — Detachment 1, 52nd Operations Group — maintains a permanent presence in the country. The unit is focused on supporting a series of U.S. aircraft rotations into Poland — F-16 fighter jets and C-130 Hercules planes.

Breedlove, a former fighter pilot who once commanded the Air Force mission in Aviano, said the mission in Poland has gotten off to a good start. He also credited Poland for making significant investments in its own defense, something some NATO members have been criticized for not doing.

“I’m encouraged by what is happening in Poland,” said Breedlove, who also serves as NATO’s top military officer. “What I see is an extremely capable and professional military force moving forward with their capabilities.”

The U.S. Air Force mission on Poland comes at a time when critics say the U.S. needs to reassure its allies in Eastern Europe, where there has been some consternation over U.S. plans to downsize its missile defense initiative. Coupled with an overall reduction in troop presence in Europe and a so-called strategic pivot to Asia, the U.S.’s commitment to Poland has been called into question by some.

While Poland plays a large role in President Obama’s U.S. European Phased Adaptive Approach to missile defense, with plans for it to serve as a site for interceptors in the years ahead, its role is smaller than was envisioned under the Bush administration’s more robust missile defense plan. Skepticism over U.S. commitment emerged again earlier this year when the fourth phase of the project — the deployment of advanced missiles designed to intercept intercontinental ballistic missiles launched at the U.S. from the Middle East — was scrapped.

“This continues a pattern which unfortunately contributes to an image of American inconsistency, if not arrogance,” wrote Atlantic Council fellow Ian Brzezinski in a recent paper.

Breedlove, however, said the U.S. remains committed to the region.

“As far as missile defense, parts one through three have not changed and we do not see any change in them,” Breedlove said. “Those are the phases that are applicable to the defense of our NATO allies.”

While the U.S. argues the system is aimed at countering missiles from rogue states, such as Iran, many in eastern Europe see it as a counterweight to Russia. For its part, Russia sees the system as directed at it, further souring relations between the U.S. and its old Cold War foe.

Meanwhile, Breedlove said he doesn’t expect further big changes to the U.S. troop presence in Europe in the years ahead.