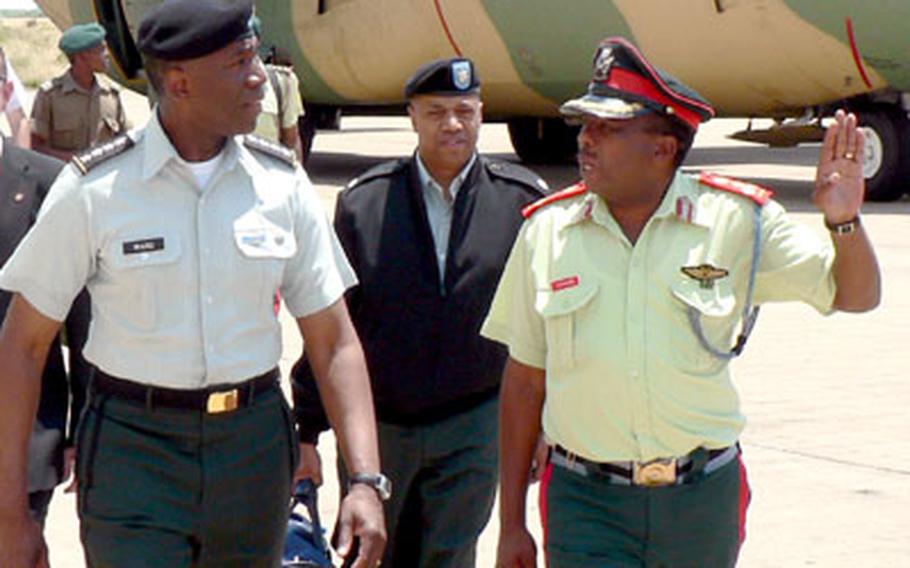 A delegation from the U.S. European Command led by Army Gen. William &#8220;Kip&#8221; Ward finished off a nine-day trip to three African countries on Saturday, with much of the time spent with military leaders and troops in South Africa.

In August, Time magazine reported that Ward, EUCOM&#8217;s deputy commander, would be the Pentagon&#8217;s top choice to lead a new U.S. command in Africa. But Navy Capt. Jeff Gradeck, EUCOM&#8217;s chief public affairs officer, said Tuesday that it was &#8220;far too premature&#8221; to discuss an organization that&#8217;s still under consideration, much less talk about its future leadership.

Lt. Cmdr. Joe Carpenter, a Department of Defense spokesman, said the concept of an African command was still being considered.

He said Secretary of Defense Donald Rumsfeld was expected to make a decision on the matter &#8220;by early next year.&#8221;

Gradeck said Ward, who was making his second trip to Africa since arriving in Stuttgart, Germany, was just doing his duty as a EUCOM officer.

Gradeck said it was Ward&#8217;s first visit to South Africa, Botswana and Angola.

&#8220;His goal for going there was to build personal relationships and friendships and learn as much as he could about their militaries,&#8221; Gradeck said.

In addition, Ward focused on three U.S. efforts in the region: the Africa Contingency Operations Training and Assistance Program, the State Partnership Program and the fight against HIV and AIDS.

In Botswana, Ward toured an orphanage that EUCOM has funded through the Office of Defense Cooperation&#8217;s humanitarian assistance program. He also met with the country&#8217;s president, Festus Mogae, and visited a C-130 crew that took part in the airlift of peacekeepers to Sudan.

Gradeck said there are no troops from EUCOM permanently stationed or rotating through Africa, though all the services routinely engage in exercises or humanitarian efforts with many of the countries. The Central and Pacific Commands engage in similar efforts in the African countries they&#8217;re responsible for.