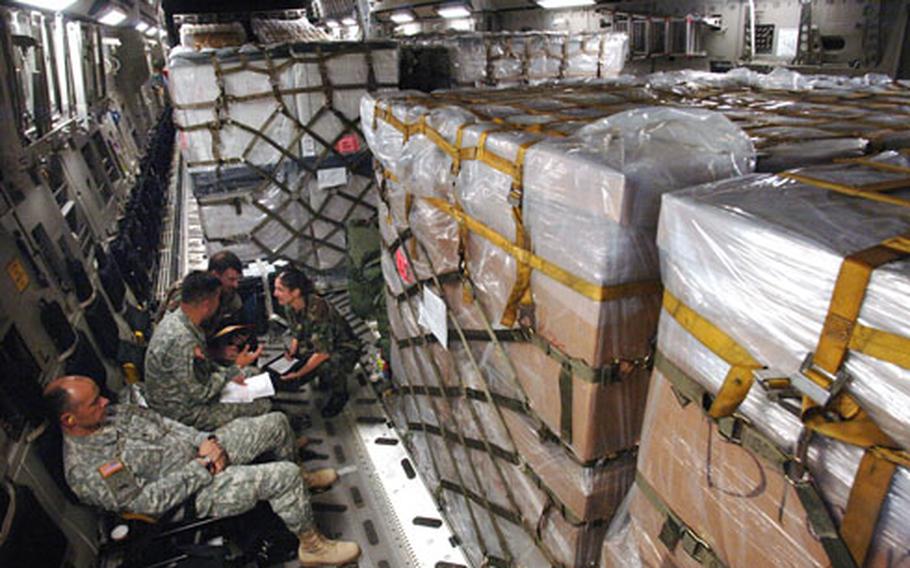 A small group of officers discuss details of the joint humanitarian assistance delivery during a flight to Tblisi, Georgia, in August. While the U.S. delivered more than $1 million in aid to the people of the Republic of Georgia following the country’s five-day war with Russia, the U.S. and other allies are not prepared to help rebuild the Georgian military. (Scott Wagers/Courtesy of the U.S. Air Force)

STUTTGART, Germany &#8212; A U.S. European Command assessment of damage done to Georgia&#8217;s military, which was overwhelmed during a five-day war with Russia in August, is now complete and the task force&#8217;s findings have been forwarded to Georgian officials, according to EUCOM.

The assessment was wide ranging and examined areas such as "doctrine, organization, training, materiel, leadership, personnel and facilities," Barker added. "However, releasing detailed information could jeopardize the security of a partner nation so it is inappropriate for me to comment on another nation&#8217;s defensive capabilities."

The EUCOM assessors were dispatched to Georgia to determine the degree of destruction to the country&#8217;s military infrastructure, which was leveled by Russian forces in the conflict over the breakaway provinces of South Ossetia and Abkhazia. However, there doesn&#8217;t appear to be an aggressive push in Washington to help the Georgians re-equip their military.

Indeed, while there were calls from U.S. lawmakers and defense officials about the need to help Georgia rebuild during the immediate aftermath of the conflict, talk of military aid seems to have grown softer, the tone less urgent.

For instance, during a visit to Moscow last month, Rep. Howard Berman, D.-Calif., who heads the House Committee on Foreign Relations, said the question of military aid wouldn&#8217;t be considered by Congress until next year. Instead, Berman&#8217;s comments during the three-day visit in Moscow were focused more on bridge building.

"It&#8217;s clear that after 9/11, amid the war in Iraq, and while facing challenges in the Middle East, we have not spent enough time thinking about U.S.-Russian relations," Berman said during a news conference. "We need to engage in better and more frequent dialogue."

James Wertsch, an expert on post-Soviet democracy movements at Washington University in St. Louis, said the U.S. isn&#8217;t likely to rush into any agreement to provide military aid. On the one hand, it could antagonize an already fragile relationship with Russia; on the other, there is growing concern about what role the Georgian government may have had in starting the conflict as more details emerge about the murky origins of the war, Wertsch said.

"If this is supposed to be our laboratory for democracy, is it really going so well? How much are we willing to go out on a big limb here?" Wertsch said. "It seems to me that all the players are saying this is a little dangerous and maybe we need to pull back.

"I think, hopefully, all sides got a little sobered by what happened in August."

When fighting broke out in Georgia, about 120 U.S. soldiers were still in the country, having recently completed a training mission to prepare the Georgian forces for a deployment to Iraq. That training program, which has been in place for several years, has come to a halt since Georgia was forced to pull its troops from Iraq as a result of the threat on the home front.

Barker said EUCOM will continue to work with Georgia in other ways, though specific security partnerships are yet to be worked out.

"Georgia was a steadfast partner before the conflict with Russia, and that relationship will continue," Barker said.

Though much has been provided to Georgia in the form of humanitarian aid &#8212; the U.S. military delivered more than 2 million pounds of material over the course of several weeks and the U.S. government agreed to provide $1 billion in aid &#8212; some leaders say there needs to be a military component.

"Georgia, like any sovereign country, should have the ability to defend itself and deter renewed aggression," Eric S. Edelman, the Defense Department&#8217;s undersecretary for policy, said during a session with members of the Senate Armed Service Committee in September. "There should not be any question about whether Georgia is entitled to military assistance from the United States or, indeed, from NATO or any of the NATO allies."

Wertsch said he hopes U.S. policy makers take a measured approach as they grapple with the issue of military support and, hopefully, avoid worsening an already strained relationship with Russia.

"I think we should consider helping rebuild and retrain the army, but we need to make sure it doesn&#8217;t involve anything that could be seen as providing offensive weapons," Wertsch said. "I don&#8217;t think there&#8217;s anything in it for anyone if the temperature gets turned up."