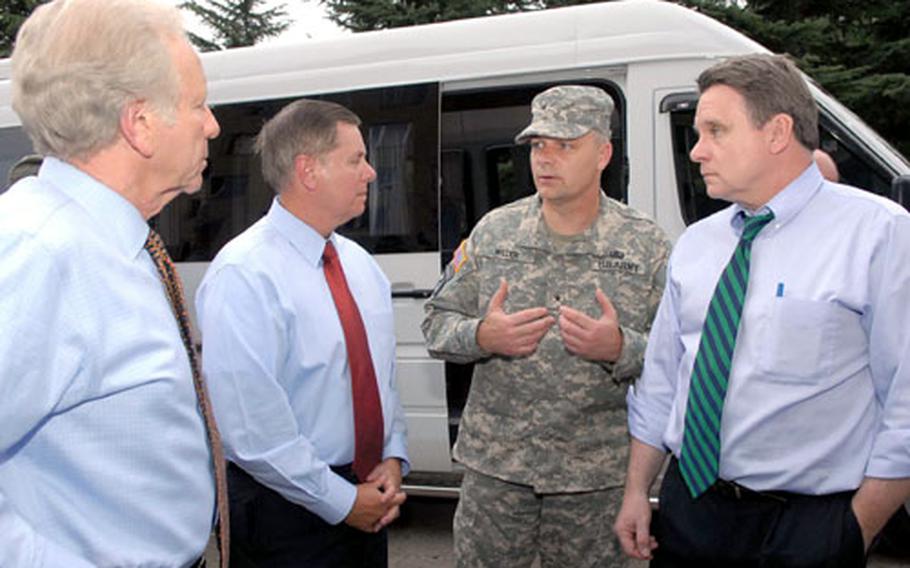 TBILISI, Georgia &#8212; Although a U.S. European Command team is focused for now on the humanitarian crisis in Georgia, it may eventually review the nation&#8217;s military needs in light of its conflict with Russia, according to the group&#8217;s commander.

Brig. Gen. Jon Miller, who is heading EUCOM&#8217;s Joint Assessment Team, said Wednesday that part of his mandate is "to be prepared" to evaluate the condition of Georgia&#8217;s military.

"It&#8217;s a possibility, but it is not my mission right now," said Miller, adding humanitarian aid is a more immediate concern.

Miller&#8217;s comments came after meetings Wednesday with a congressional delegation that included Sen. Joe Lieberman, an independent from Connecticut who said the U.S. should consider deploying anti-aircraft and anti-tank weapons to Georgia to help the country defend itself.

"We would like to see the United States provide assistance to the Georgian military. Self-defense equipment that will help them defend and deter against Russian aggression in the future," said Lieberman, after touring a facility holding displaced families with Miller and Republicans Sen. Lindsey Graham of South Carolina and Rep. Chris Smith of New Jersey.

Following Lieberman&#8217;s comments, Miller noted that such decisions are political and better left to "our senior commanders."

Nonetheless, "it&#8217;s hard not to accept the fundamental principle that a free people have the right (to defend themselves)," he said.

In the meantime, there is other work to do.

With more than 600 camps for displaced people scattered around Georgia and some 80,000 people who have been uprooted from their homes, the urgent need is ensuring food, shelter and medical care are reaching the people, Miller said.

"The need is significant," said Miller, who serves as the deputy commander of the 21st Theater Sustainment Command in Kaiserslautern, Germany.

Miller&#8217;s assessment team arrived in Georgia on Monday. The group is comprised of 102 people drawn from various units across the military&#8217;s branches of service. Members are fanning out to locations around Georgia&#8217;s capital city, figuring out how to meet basic needs.

Many of the facilities serving as centers for the displaced are schools, which will soon be returning to session.

Miller said his group is looking at ways to consolidate some of those centers into a more manageable number and working on establishing housing.

What&#8217;s not known is how long the EUCOM team will be operating in Georgia.

"At this time, no one can identify a time," Miller said. "We have to understand what the (humanitarian) requirement is."

Roughly 70 people from Miller&#8217;s team have been in Georgia since the start of the country&#8217;s conflict with Russia. Initially there to help train the Georgian army for a deployment to Iraq, some members of that group are now doing various jobs for the assessment team, such as providing communication support and health care assistance, Miller said.

On Wednesday, Miller and the congressional delegation met with Georgian political leaders and toured an area for displaced people on the outskirts of Tbilisi.

During the tour, the politicians offered words of encouragement to a group of Georgians who surrounded the delegation to explain their plight.

"The American people are going to help you," Graham told the crowd.