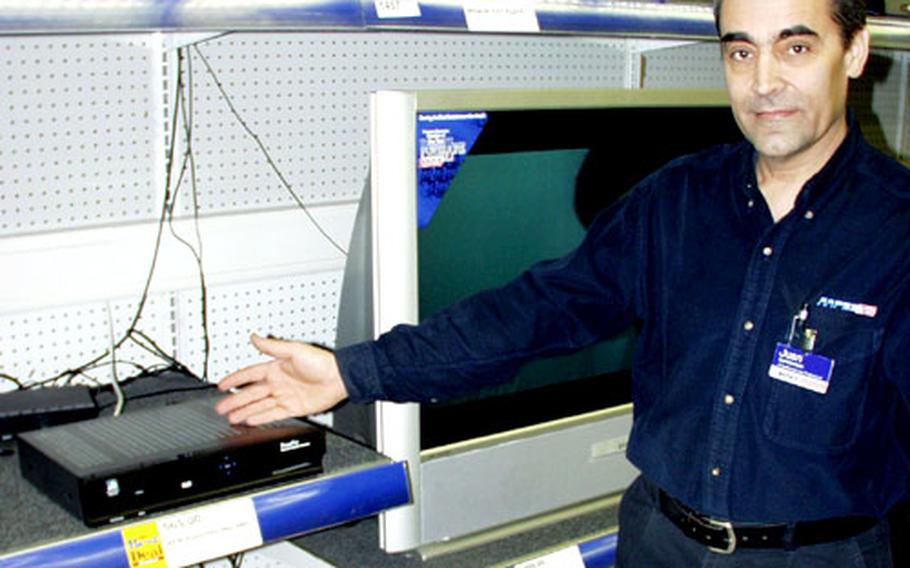 Army and Air Force Exchange Service supervisor Juan Quenonas shows a $565 decoder that is needed to descramble AFN shows that are broadcast via satellite. The U.S. European Command is working on a plan to provide the equipment for free to servicemembers and Department of Defense civilian employees. (dAVID jOSAR / s&s)

STUTTGART, Germany &#8212; The Department of Defense has asked the U.S. European Command to fine-tune a plan that would give military and civilian personnel living off-base the equipment to receive American Forces Network broadcasts.

EUCOM spokesman Air Force Capt. Geoffrey Fischer said the money has not been earmarked for the program. But, he said, the Department of Defense has asked EUCOM to work on a better way to implement a program that would loan the $600 decoders to servicemembers and DOD civilians.

EUCOM is working with Pacific Command on the issue, Fischer said.

The plan, estimated last year to cost $42 million to implement, will ensure that all military personnel and civilian employees and their families have access to command information routinely aired on AFN broadcasts.

According to EUCOM officials, that need was underscored after the Sept. 11, 2001, terror attacks, when EUCOM had to get out messages about force protection and other steps individuals could take to safeguard themselves.

EUCOM officials began in 1997 to look at new ways to provide AFN broadcasts to people living off-base after the European Union decided to switch from an analog to a digital signal, which is clearer, for television broadcasts.

Fischer said EUCOM is committed to ensuring command information continues to get out to &#8220;the men, women and children within EUCOM.&#8221;

Loaning AFN decoders, a proposal dubbed the &#8220;Direct to Home Program,&#8221; also is viewed as a quality-of-life issue, Fischer said.

People living on base automatically have AFN, which is broadcast from a satellite or is part of home cable service on certain compounds.

A single AFN channel is broadcast, but in many places the signal is difficult if not impossible to pick up with just an antenna. So those living off base who want AFN must buy a decoder &#8212; produced by only one company &#8212; from the Army and Air Force Exchange Service, purchase a satellite dish and then, in most cases, have it professionally installed.

About 40 percent of the military personnel and DOD civilians live off military bases in EUCOM&#8217;s area of responsibility, EUCOM said.

Despite Operation Enduring Freedom, the U.S. defense budget has had significant spending cuts.

EUCOM has been lobbying for a proposal that would fund the AFN decoder, satellite dish, installation cost and delivery fee. AFN also rents the decoders for $25 a month, AAFES-Europe spokesman Army Maj. Mitch Edgar said.

Edgar said AAFES would &#8220;love&#8221; to be out of the business of selling and renting decoders. He said AAFES marks up the decoders about 5 percent from what it pays for them from Scientific American. The mark-up is used to cover things such as transportation from the warehouse and employee costs.

The U.S. military already provides furniture and appliances such as washers, dryers and refrigerators to individual households. The decoders would be handled in a similar way.

Army Sgt. 1st Class Lisa Kurz, who lives in Boblingen, recently was stationed at EUCOM and said she doesn&#8217;t understand why the decoders aren&#8217;t included in the list of furniture and other items she can borrow to furnish her house.

So far she has balked at getting the decoders, Kurz explained, because, she estimated, the entire cost would hit $1,000.

Air Force Staff Sgt. Aaron Cole, who works at Ramstein, said he doesn&#8217;t see why EUCOM should give out the decoders.