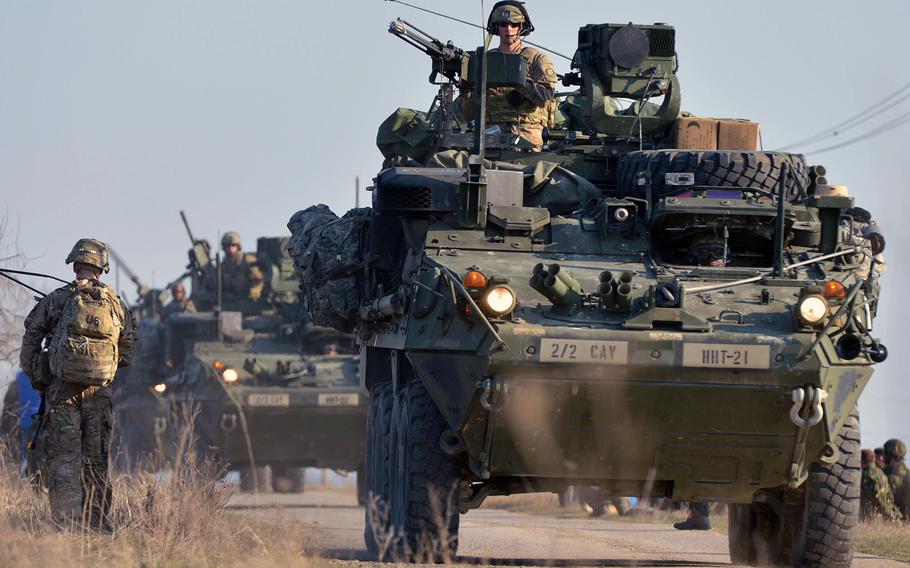 Strikers from 2nd Squadron, 2nd Cavalry roll into the Smardan training area in Romania to meet up with soldiers from the 173rd Airborne Brigade who parachuted in earlier as part of Operation Atlantic Resolve, Tuesday, March 24, 2015. The U.S. has increased its presence and operations in eastern Europe over the last two years to reassure eastern allies wary of Russia's intentions. (Michael Abrams/Stars and Stripes)

Strikers from 2nd Squadron, 2nd Cavalry roll into the Smardan training area in Romania to meet up with soldiers from the 173rd Airborne Brigade who parachuted in earlier as part of Operation Atlantic Resolve, Tuesday, March 24, 2015. The U.S. has increased its presence and operations in eastern Europe over the last two years to reassure eastern allies wary of Russia's intentions. (Michael Abrams/Stars and Stripes) 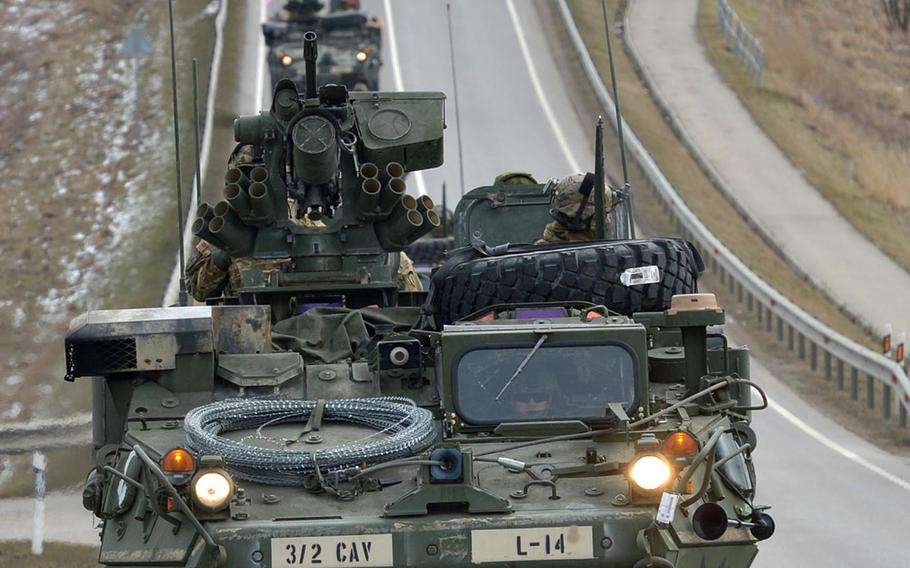 Strykers of Lightning Troop, 3rd Squadron, 2nd Cavalry Regiment convoy from Alytus, Lithuania, to the Polish border, Monday, March 23, 2015. The so-called Dragoon Ride continued through Poland and the Czech Republic to their home base at Vilseck, Germany, following training in Lithuania. The convoy was part of U.S. efforts to show strength in eastern Europe following Russia's intervention in Ukraine. (Michael Abrams/Stars and Stripes) 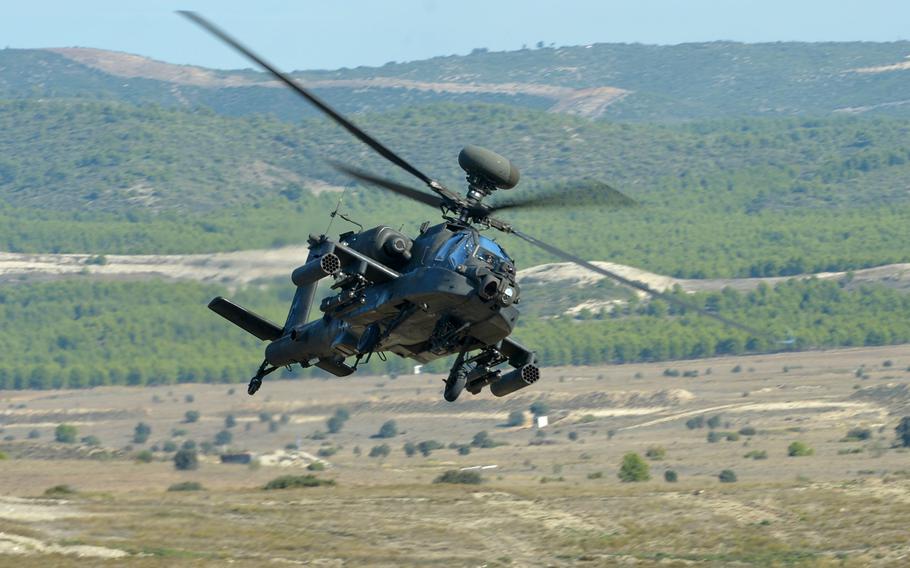 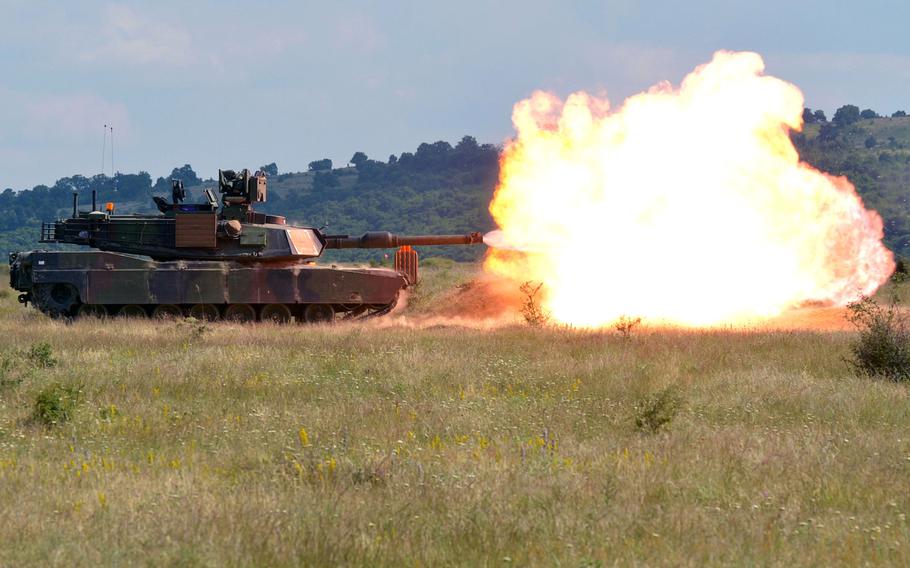 An M1A2 Abrams tank, crewed by soldiers from the 3rd Infantry Division's 3rd Combined Arms Battalion, 69th Armored Regiment out of Fort Stewart, Ga., fire a practice round at the Novo Selo Training Area in Bulgaria, Wednesday, June 24, 2015. The U.S. has increased rotations of troops from the U.S. to bolster forces in Europe, but a new U.S. European Command strategy document says that may not be enough to face the current security situation with Russia as the primary concern. (Michael Abrams/Stars and Stripes) 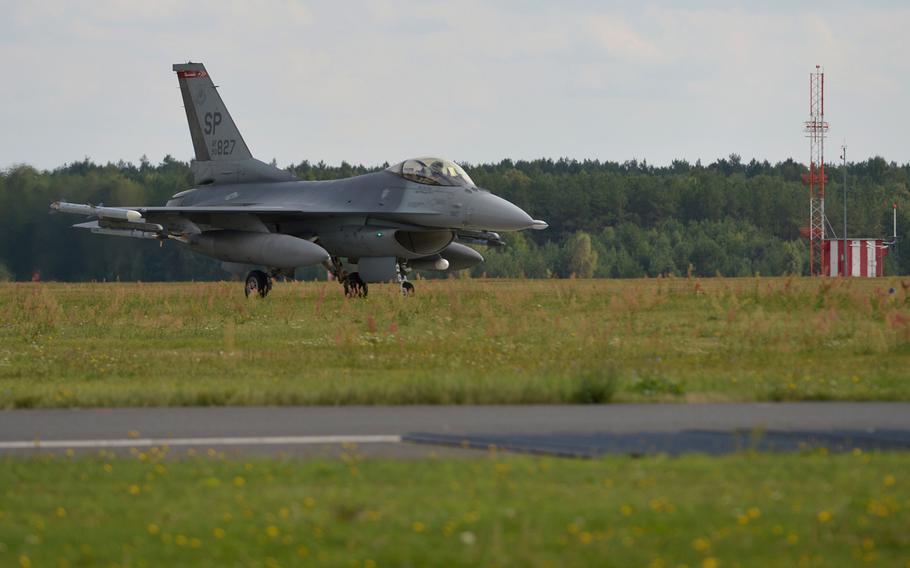 A F-16 Fighting Falcon of the 480th Fighter Squadron from Spangdahlem Air Base, Germany, rolls down the runway at Lask Air Base, Poland, Thursday, Sept. 10, 2015. Planes from the squadron were training at the Polish base. The U.S. has stepped up its presence in eastern Europe after Russia annexed Ukraine's Crimea Peninsula in March 2014. A new U.S. European Command strategy document says Russia is now the primary security concern. (Michael Abrams/Stars and Stripes)

STUTTGART, Germany — Russia’s re-emergence as the top security threat in Europe demands a fresh examination of how American power is deployed on the Continent, where a steady post-Cold War drawdown has left the military undermanned.

The document, issued Tuesday, lists deterring Russian aggression as EUCOM’s top priority — a sharp shift from the 2012 strategy, which suggested Russia was a potential partner to be cultivated as one of many “key relationships.”

While the strategy stops short of naming requirements to bolster military capabilities in Europe, it does make clear that the current force structure is not commensurate with the immediate security situation.

“Even as USEUCOM leans forward with NATO allies and partners in response to these new challenges, fully addressing them and their long-term implications requires a reformulation of the U.S. strategic calculus” and corresponding resources in Europe, the strategy says.

As the U.S. has increased its presence and cooperation with allies on Russia’s periphery since Moscow’s annexation in March 2014 of Ukraine’s Crimea Peninsula, it has been relying heavily on forces rotating in from the States. That model has been touted as an effective means of getting the most from a thinning force.

But the new EUCOM strategy cautions that such an approach on its own is insufficient to meet current challenges.

“The temporary presence of rotational forces complements, but does not substitute for an enduring forward deployed presence that is tangible and real,” the document states. “Virtual presence means actual absence.”

Today, there are fewer than 65,000 U.S. military personnel permanently stationed in Europe, down from Cold War totals of roughly 300,000.

In 2012, ensuring a ready force was EUCOM’s top priority, reflecting concerns about the downsizing of the military in Europe, which four years ago was regarded by many critics in Washington as a Cold War relic. At the time, there were fears across the military community that even sharper cuts could be on the horizon.

Today, the drumbeat for more drawdown in Europe has largely faded, but it remains unclear whether assets will be returning to the Continent in the future. Breedlove has repeatedly lobbied for more forces in Europe, which the Pentagon has sought to augment through increased rotations of U.S.-based troops.

In the meantime, EUCOM has already adapted its operations during the past two years to meet more demands. Since Russia’s intervention in Ukraine, the U.S. has intensified its tempo of operations across the Baltics and eastern Europe. For U.S. allies on NATO’s eastern edge, Moscow’s moves in Ukraine have been a source of angst.

EUCOM sees the Russian threat as one unlikely to change in the near term.

“Russia is presenting enduring challenges to our allies and partners in multiple regions,” the EUCOM Theater Strategy said.

A EUCOM senior official, speaking on background about the transformation of strategy, said the shift from seeing Russia as a partner to seeing it as an adversary has been a “wrenching transition” for the U.S. and its allies.

“Deterring Russia had not been our mission; it had been our policy to not have that mission,” the official said.

Russia, however, isn’t EUCOM’s only focus.

With migrants flooding into Europe from the war in Syria and from North Africa, EUCOM must collaborate with partners along NATO’s southern flank, the strategy says. However, those requirements are unlikely to involve the same type of military presence that has materialized over the past year in eastern Europe, where Army tanks have been positioned for more intense training with partners.

In the south, the focus is more on working with various government agencies in the region and ensuring intelligence cooperation, EUCOM officials have said.

Breedlove said his command continues to adapt to the new threat environment.

“Our command has done an outstanding job balancing its focus between a revanchist Russia, mass migrations from other regions and foreign terrorist fighters transiting through Europe while maintaining our commitments to our NATO allies and partners.”