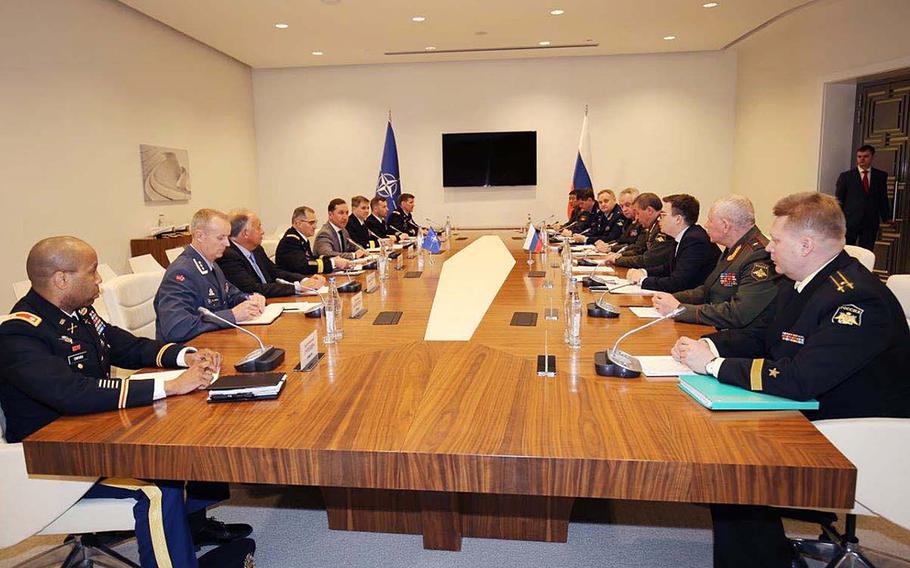 STUTTGART, Germany — Gen. Curtis M. Scaparrotti will hold talks Wednesday with Russia’s top military chief, a rare meeting at a time of tension after Russia’s recent attack on Ukrainian ships and a threat from the U.S. to quit a key nuclear treaty with Moscow.

Uncertainty about Russia’s next moves in Ukraine are likely to loom over the talks. Tensions in the Black Sea region have been an area of growing concern for top NATO leaders.

In Brussels last week, U.S. Secretary of State Mike Pompeo urged allies to take a firmer stance against Russian aggression in the region.

On Thursday, the U.S. conducted a surveillance flight over Ukraine under the Open Skies Treaty. The flight, which came at the behest of Ukraine, was intended to demonstrate solidarity with Kiev after Russian warships opened fire on three Ukrainian vessels in the Black Sea near the tense Kerch Strait.

After the attack, Ukraine’s government declared martial law in parts of the country amid concerns that Russia could launch a ground invasion.

Meanwhile, Pompeo last week also issued an ultimatum to Moscow, giving Russia 60 days to come into compliance with the 1987 Intermediate-Range Nuclear Forces Treaty or else the U.S. will begin the process of terminating the accord. NATO says a new Russian missile system — the 9M729 — is in violation of the treaty, which Moscow denies.

Russian President Vladimir Putin has threatened countermeasures should the U.S. move to develop missile systems banned under the pact.

Military officials haven’t outlined the agenda for Wednesday’s talks between Scaparrotti and Gerasimov. The last meeting between the generals was in April, which was then followed by a phone call in September, McCabe said.

“In their last exchange, the leaders agreed to continue using the military lines of communication,” McCabe said.

Ahead of talks with Gerasimov, Scaparrotti met with military leaders from Azerbaijan, a country that has close ties to Russia but also cooperates with NATO and has sent troops in support of the alliance’s mission in Afghanistan.