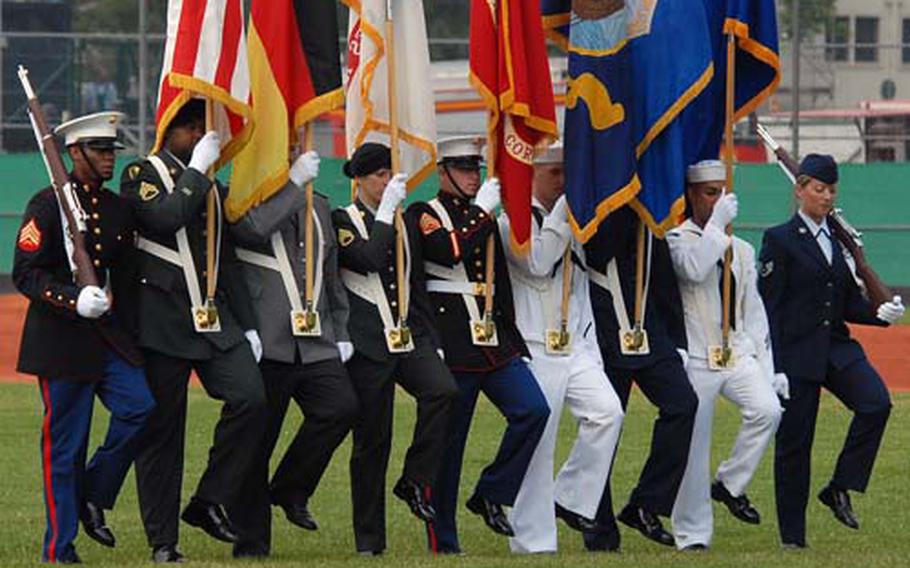 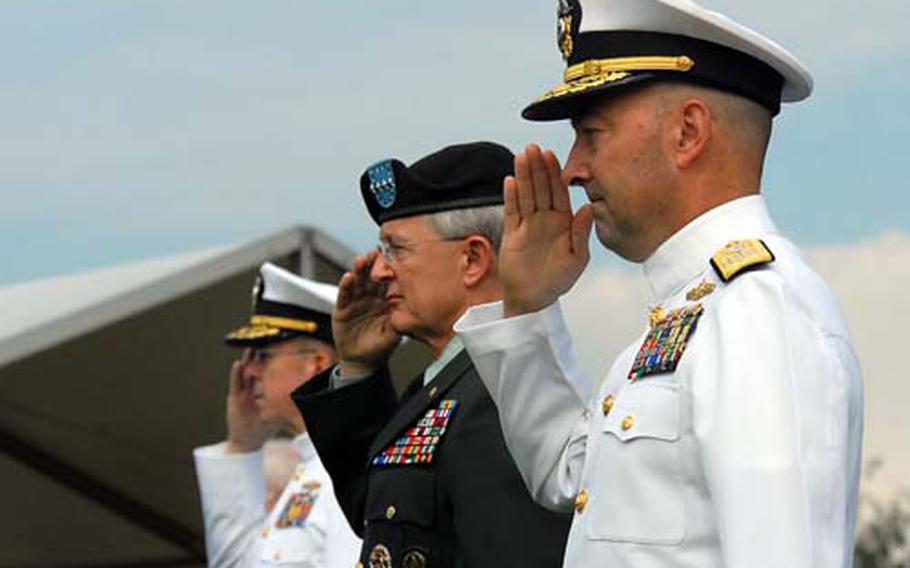 The incoming commander of the U.S. European Command Adm. James Stavridis, the outgoing commander Gen. John Craddock and the Chairman of the Joint Chiefs of Staff Adm. Michael Mullen, from right, salute during the playing of the national anthems. (Michael Abrams / S&S) 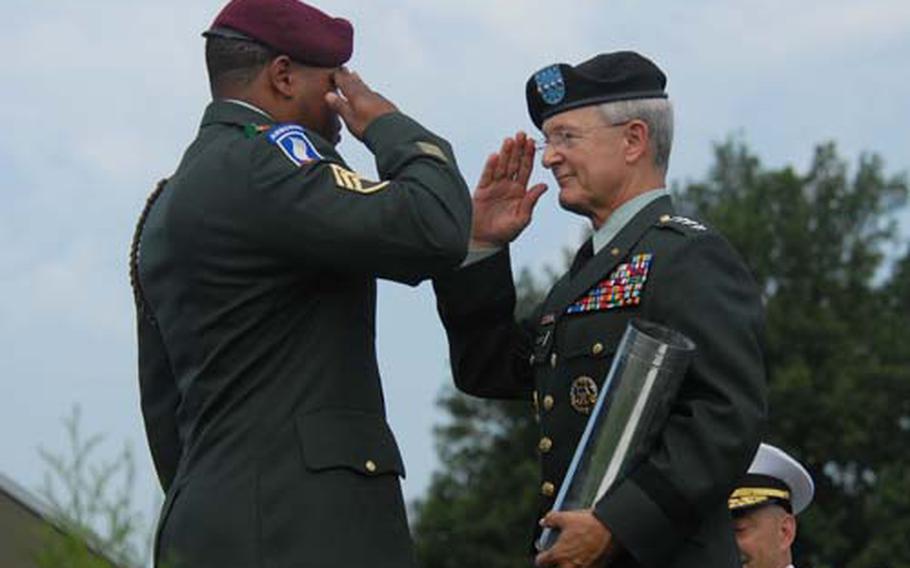 STUTTGART, Germany &#8212; When Gen. John Craddock first arrived in Germany as a young officer with the 3rd Armored Division, it was a different world.

In the early 1970s, there were some 370,000 troops in the U.S. European Command theater. It was the height of the Cold War and Craddock was living in a world where the enemy and the mission were clear.

Craddock, who has led EUCOM and served as supreme allied commander of NATO forces in Europe for nearly three years, ended a 38-year military career Tuesday when he turned over the EUCOM reins to Adm. James Stavridis.

But before stepping away as the commander of 85,000 U.S. troops in Europe, Craddock reflected on some of the achievements during his tenure and the ever-shifting security environment in the region.

The past couple of years have brought many changes: the ongoing transformation of U.S. forces in Europe; a war between Russia and Georgia; and the war effort in Afghanistan, where Craddock has dealt with the challenge of trying to win more troop contributions from NATO partners.

Craddock points a finger at European political leaders who he says are unwilling to do more in the face of local public opinion polls against the war.

"That gives me cause for concern and it is a factoid that needs to be analyzed," said Craddock. "It&#8217;s time for political leaders to step up."

Furthermore, the so-called caveats, which restrict the movements of some NATO troops in Afghanistan, must be reduced, he said. The roughly 70 caveats hurt the ability of commanders on the battlefield to operate effectively, he said.

Craddock&#8217;s message to political leaders: "You need to do some agonizing reappraisals."

In an environment where Afghan security forces are adding battalions at a faster rate than NATO is able to field mentor training teams, more resources are needed, he said.

Pentagon plans had called for the 2nd Brigade Combat Team from Baumholder and the 172nd Infantry Brigade from Grafenw&#246;hr to return to the States in the next few years. A decision was made in December 2007 to keep the two brigades in Germany, pending completion of an ongoing Quadrennial Defense Review expected to be completed early next year.

Losing more brigades will make it difficult for EUCOM to meet all of its strategic responsibilities, from deployments downrange to helping train and build the security capacity of EUCOM partners, he said.

"The end state for the Army (in Europe) is too small," Craddock said. "We need the four brigades here permanently."

Though the military&#8217;s transformation plans call for more reductions, Craddock has long advocated a halt to the drawdown. He hammered home that message again before heading off to civilian life.

In conjunction with maintaining troop levels, Craddock said it is critical to maintain family support initiatives in Europe &#8212; such as counseling services for soldiers and families, sufficient numbers of teachers for the schools and curriculum equal to stateside schools.

"We cannot have an assignment to EUCOM become a hardship tour," Craddock said. If there is deterioration in services, "it leads to an erosion in readiness."

However, in a tightening budget environment and with no congressional representation to advocate on EUCOM&#8217;s behalf, like stateside military communities have, winning support for various quality-of-life measures can be a challenge, he said.

In the aftermath of the Russian invasion of Georgia, EUCOM also mobilized to deliver more than 2 million pounds of humanitarian supplies to the Georgian capital of Tbilisi, testing the command&#8217;s rapid-response capabilities.

Though he is retiring from military life, the general won&#8217;t fade from the public scene for good. After a couple of months of rest and recuperation, he said, he suspects he&#8217;ll start to feel the itch to get involved.

"I want to stay engaged and active," Craddock said. "Do I work for me or someone else? That&#8217;s the next question."