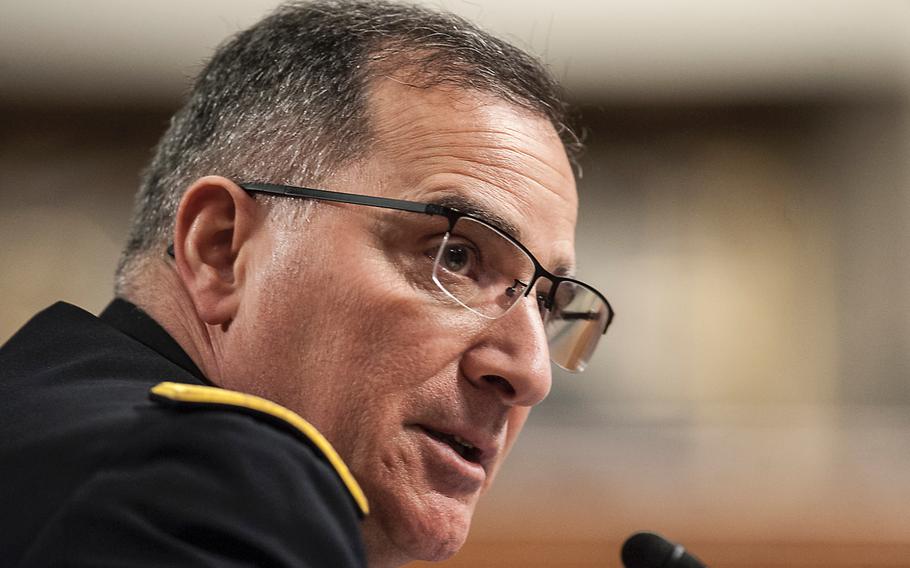 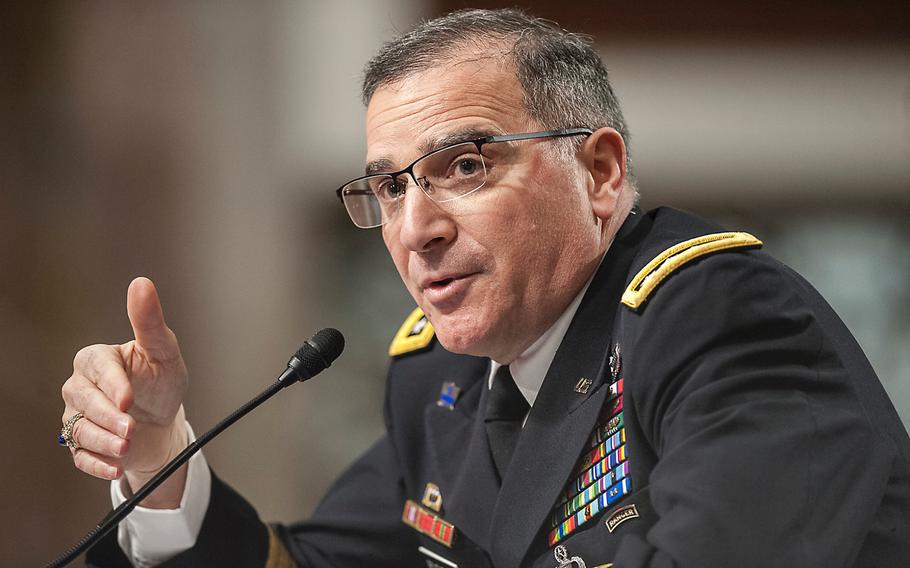 Buy Photo
Commander of the U.S. European Command Army Gen. Curtis Scaparrotti testifies before members of the Senate Committee on Armed Services during a hearing on Capitol Hill on Thursday, March 23, 2017. Scaparrotti stressed to committee members that the European theater remains critical to the United States national interests. (Carlos Bongioanni/Stars and Stripes)

STUTTGART, Germany — U.S. European Command is seeking additional forces and firepower to augment a U.S. military that has dwindled in size while Russia has grown stronger, America’s top general in Europe said Thursday.

“EUCOM is coordinating across the DOD to obtain the forces we need in every warfare domain,” Gen. Curtis M. Scaparrotti said in testimony before the Senate Armed Services Committee. “This may include additional maneuver forces, combat air squadrons, anti-submarine capabilities, a carrier strike group and maritime amphibious capabilities.”

Scaparrotti’s testimony represents the most explicit and wide-ranging request by a EUCOM chief for more assets since the end of the Cold War. Without rotational forces added to EUCOM’s force mix in the past year, Scaparrotti said, the command would not have sufficient assets “to deter Russia from further aggression.”

EUCOM has experienced a period of adjustment over the past several years, with a headquarters that has shifted its focus from “security cooperation” with allies to rebuilding warfighting command and control skills lost during the post-Cold War era.

“We are adjusting our posture, plans and readiness to respond to possible future conflicts,” Scaparrotti said.

There are questions about whether EUCOM has sufficient forces to lead in a fight or deter a more aggressive Russia, senators said.

Since the Cold War, the U.S. military in Europe has dwindled from 300,000 servicemembers to roughly 62,000. With President Donald Trump seeking a larger Pentagon budget, it remains unclear how much of a focus Europe will be in the Pentagon’s plans. Military leaders have singled out Russia as a singular threat, but Trump wants better ties with Moscow.

Sen. Claire McCaskill, D-Mo., questioned whether Trump’s overtures were undermining EUCOM attempts to “reassure” allies. “We do not have a commander in chief who is willing to say out loud what everyone knows,” said McCaskill, who called Russian President Vladimir Putin a “thug.”

In a sign of the renewed focus on Europe, the Army in recent weeks has begun looking for additional bases in the event the Pentagon moves to reposition more troops on the Continent.

“We have to get our posture correct for deterrence, and that is across all the services,” Scaparrotti said. “In Europe, I don’t have the carrier or the submarine capacity that would best enable me to do my job in EUCOM.” More stockpiles of munitions are also needed, he said.

Russia’s buildup in the fortified enclave of Kaliningrad and its western military district has heightened concerns about Moscow’s ability to deny access to the area in a conflict. Russia has said it has no interest in intervening militarily on NATO territory, but the country’s intervention in Ukraine and continued backing of separatists there has caused anxiety among some alliance members.

During Scaparrotti’s testimony, Russia dominated the conversation, with senators expressing concern about everything from nuclear saber-rattling by Moscow to signs that it is attempting to undermine U.S. efforts in Afghanistan.

Lawmakers asked what EUCOM was doing to counter a Russian misinformation campaign, which they say is aimed at undermining allies and influencing elections in Europe. For example, German officials have expressed concern about Moscow’s interference in its coming election.

Scaparrotti said EUCOM and the State Department have launched an effort — the Russia Information Group — which is focused on countering misinformation.

“It needs to be financed,” he said. “We can get much better organized to deal with this than we are today.”

One problem is a “reluctance” among some allies to “confront it when we see it,” Scaparrotti said, referring to Russian information operations.