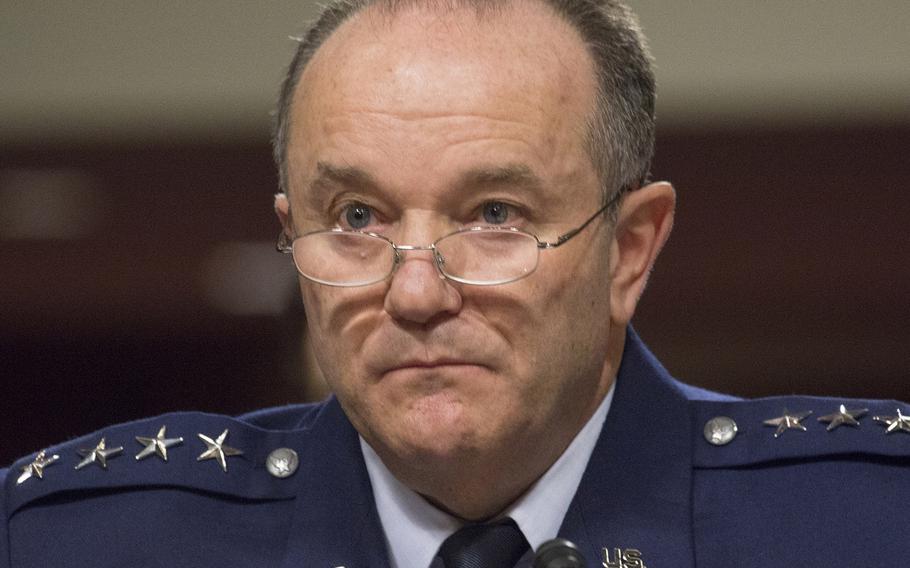 In an April 30, 2015 file photo, Gen. Philip Breedlove, commander of U.S. forces in Europe, listens to the opening statements at a Senate Armed Services Committee hearing in Washington. (Joe Gromelski/Stars and Stripes)

U.S. European Command boss Gen. Philip Breedlove is pressing the Pentagon for more Navy and intelligence gathering assets in Europe, where a Russian buildup in the Mediterranean and Black Sea represents a growing security challenge.

“There is a requirement for more,” Breedlove said at a Pentagon news briefing Friday. “And again, the processes for how we allocate those forces are going on in this building right now and that is part of the reason I am home, to advocate for what I think is an increased need to address the Russian navy.”

With Russia’s intervention in Ukraine last year, unrest along ally Turkey’s southern border with Syria and concerns about a more active Russian navy in the eastern Mediterranean, security challenges are coming from multiple fronts for EUCOM and the U.S.-led NATO alliance.

“Europe isn’t what it was 19 months ago or even six months ago,” Breedlove said.

In addition to the demand for more Navy ships to contend with Russia, the U.S. will be beefing up its presence at Incirlik Air Base in Turkey, where U.S. fighter jets are taking part in airstrikes against the Islamic State group, Breedlove said. One unnamed official told The Associated Press that additional F-15 fighters and A-10s will eventually be moved to Incirlik, likely from elsewhere in the region. In addition, the U.S. and NATO are examining ways to shore up Turkey’s air defense, though no final plans are in place, Breedlove sad.

Breedlove said he was also advocating at the Pentagon this week for more U.S. intelligence and surveillance capacity in Europe.

“We have a lack of ability to see into Russia, especially at the operational and tactical level,” Breedlove said.

U.S. military officials have lamented their limited ability to anticipate Russian moves after decades of downsizing the intelligence gathering mission in Europe, which became less important after the end of the Cold War.

While such a shift made strategic sense at the time, a more assertive Russia means intelligence-gathering capabilities need to begin shifting back, Breedlove said.

There have been signs of some progress.

“The IC (intelligence community) already has made some fairly dramatic changes in the last several months,” Breedlove said. “We’re gently turning the nose of this ship to get back what we need to be looking at.”

For the EUCOM mission, which only two years ago critics dismissed as a Cold War relic, the range of challenges has forced the military to adapt. Breedlove said he is coordinating with the Army to increase the presence of rotational forces in Europe and strengthen rapid-response capabilities.

“We must continue to strengthen our deterrence,” Breedlove said.