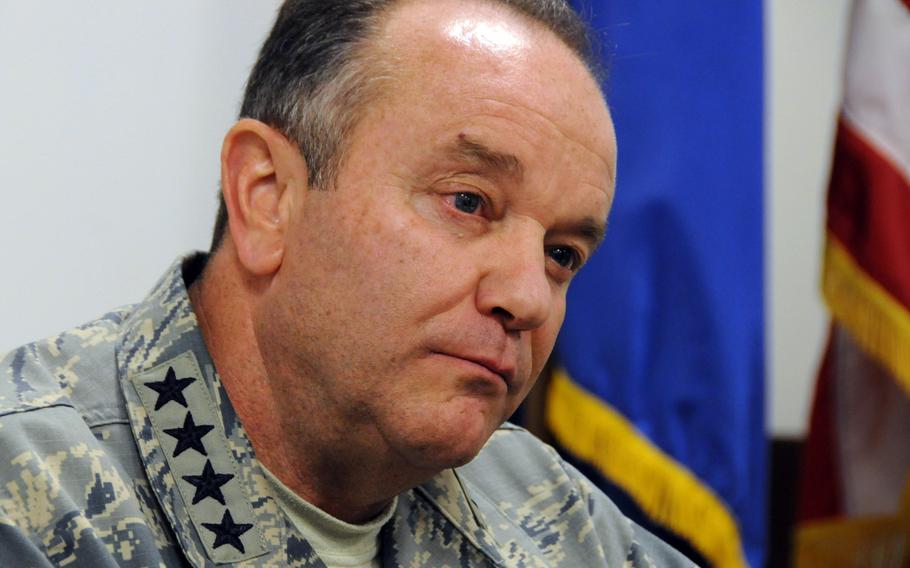 STUTTGART, Germany — U.S. European Command faces up to a 20 percent cut to its headquarters staff in connection with a Pentagon budget crunch, which has prompted greater competition among commands for a shrinking number of forces, EUCOM’s Gen. Philip Breedlove said.

Earlier this year, Defense Secretary Chuck Hagel announced that U.S. military headquarters worldwide would face cuts of up to 20 percent as the consequences of sequestration — a congressionally mandated cutback measure over 10 years — take hold.

“We want to take from the tail to preserve the tooth in our military,” Breedlove said.

Breedlove, who is also NATO’s supreme allied commander, couldn’t pinpoint how much of the budget cuts EUCOM would take. But he said the command had already gone through a series of headquarters reductions that could make the cuts less drastic than some other commands.

“In Europe, what we’ll see, just like every part of the world to include the Pacific, is more competition for forces that are available,” Breedlove said.

As the combat mission in Afghanistan winds down, Breedlove said, NATO would need to find ways to maintain a combat edge sharpened during a decade of war. In Europe, that will mean fewer bilateral training exercises and more multinational training events that get NATO and its members a better return on investment, Breedlove said.

Exercises such as the recently completed multinational Steadfast Jazz in Poland, one of NATO’s largest military drills in years, will become more commonplace, the NATO officer said.

“I think we’re going to have to get smarter in how we do things,” Breedlove said. “I think this is the future of how we do this without a lot of extra money.”

Earlier this month, U.S. Africa Command’s Gen. David Rodriguez, also speaking with reporters in London, said his headquarters would feel the pinch of sequestration. Rodriguez said AFRICOM could lose some $40 million from its 2014 budget, affecting headquarters and training missions.

Breedlove, meanwhile, said NATO can’t afford to let down its guard as the combat mission ends in Afghanistan.

“We all are going to have budget constraints,” he said. “We ... will be more dependent on each other because of that in the future.“