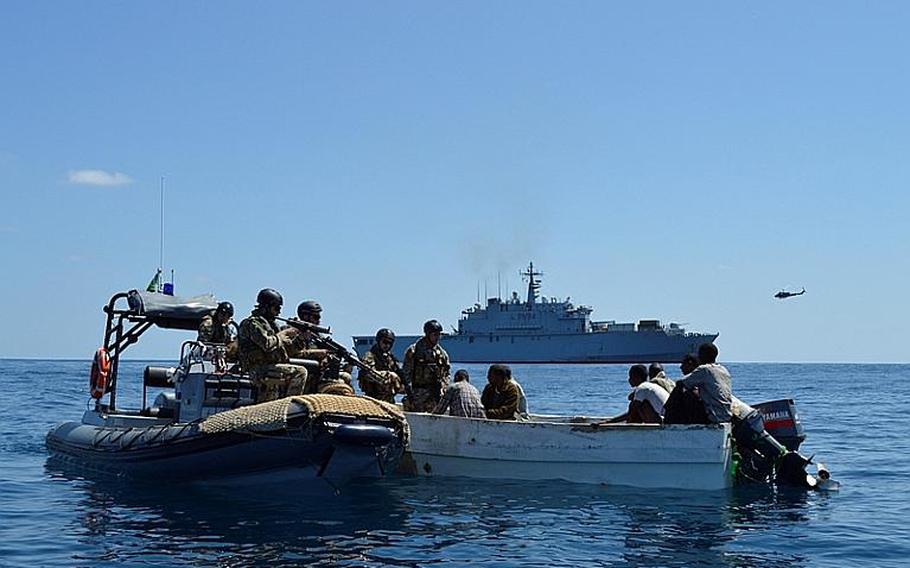 A boarding team from the EU Naval Force flagship ITS San Giusto apprehended seven suspected pirates off the coast of Somalia Wednesday. The boat, which was carrying a ladder and up to 20 fuel drums, was destroyed. (Courtesy EU NAVFOR)

Sailors on the EU Naval Force&rsquo;s flagship, ITS San Giusto, decided to investigate the skiff after observing a ladder and roughly 20 storage drums onboard. The drums were full of fuel and water, vital supplies for pirates at sea. The ladder was also a clue that the vessel was likely a pirate ship, said Lt. Cmdr. Jacqueline Sherriff, a spokeswoman for the EU Naval Force.

EU forces boarded the skiff, apprehended the men and destroyed the vessel to prevent it from being used in a future attack, Sherriff said.

&ldquo;These things cost money, so we are trying to take away the reward of piracy,&rdquo; she said.

The suspected pirates were still being held onboard the San Giusto as of Thursday afternoon.

The end of the summer monsoon season in the Indian Ocean could result in a new wave of piracy attacks, threatening commercial and military vessels in the region, according to EU Naval Force officials.

Rear Adm. Duncan Potts, the force&rsquo;s commander, said it was the first sighting of a pirate ship near Somalia in more than three months &mdash; a sign, he said, that many pirates were waiting out the dangerous rain storms before returning to sea.

&ldquo;We knew as the monsoon period ended this month that pirates would try their luck at sea and this is why we have constantly warned against complacency,&rdquo; Potts said, according to an EU Naval Forces news release.

There have been 225 piracy attacks reported worldwide this year as of late September, including 24 hijackings, according to the International Maritime Bureau, which tracks piracy trends.

In recent weeks, pirates in Indonesia took equipment from a container ship and fled without being caught, while pirates in Malaysia tied up 12 crew members on a tanker ship and swiped their money and personal belongings, according to the maritime bureau.

There were 280 incidents in the Gulf of Aden and Indian Ocean alone in 2009, when a growing number of piracy attacks attracted worldwide attention.