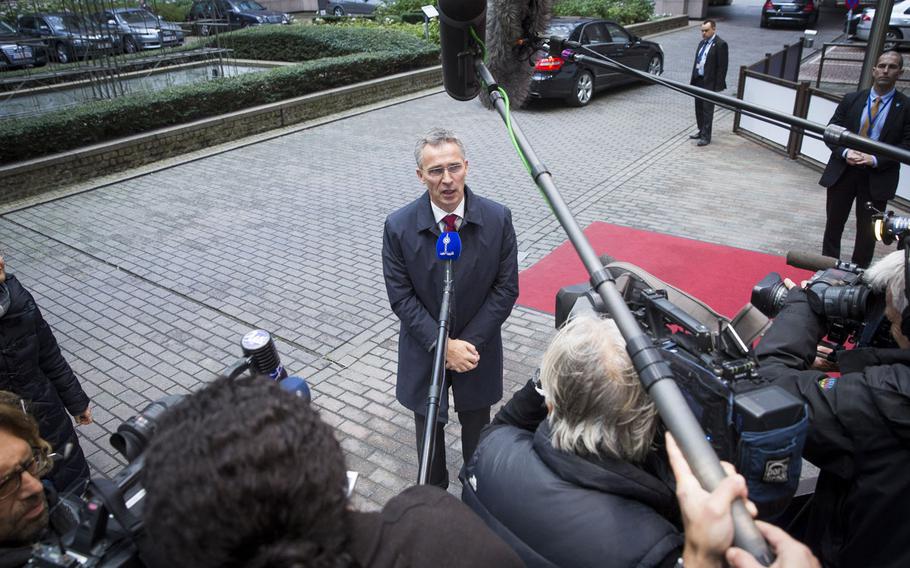 NATO Secretary-General Jens Stoltenberg speaks to journalists upon his arrival at the European Council on Tuesday, Nov. 17,. 2015. He said France had not asked NATO to invoke its Article 5 mutual defense clause. (Courtesy of NATO)

STUTTGART, Germany — The European Union activated its mutual security clause on Tuesday in response to last week’s terrorist attacks in Paris, as NATO said France had not asked the alliance to invoke its own collective defense provision.

The EU’s action will likely increase pressure on European states to boost contributions to the ongoing U.S.-led campaign against the Islamic State in Syria and Iraq.

The clause in the Treaty on European Union, is similar to NATO’s Article 5 joint defense obligation. It requires all 28-member states to provide France with aid and assistance by “all means in their power.”

This would likely help Paris in efforts to heighten security at home and abroad in wake of Friday’s attacks.

NATO’s top official, Secretary-General Jens Stoltenberg — who attended the meeting of the EU’s European Council — called for closer ties between the alliance and the European Union.

He said all NATO members are providing support to the campaign against the Islamic State. However, there are no immediate plans for NATO to follow the EU and invoke the Article 5 provisions, which state that an attack on one member requires a collective response from all.

“There has been no request of invoking Article 5,” Stoltenberg said. “But many NATO allies have offered France support and help.”

Stoltenberg also chastised Russia for not targeting Islamic State fighters in Syria, where the West has accused Moscow of targeting other rebel groups opposed to the regime of Bashar al-Assad.

Instead, Stoltenberg said, Moscow ought to play a larger role in bringing about a political solution to the Syria crisis.

“I welcome that Russia is part of that and I welcome that Russia is sitting down with many of the nations to try and find a political solution. Russia can play a constructive role in Syria,” said he said, adding that Moscow continues to focus on “targets not in ISIL controlled areas.” ISIL is an alternative name for the Islamic State group.

Russia has rejected that criticism, insisting its warplanes are mainly targeting the Islamic State, along with other jihadist groups such as the Nusra Front, al-Qaida’s affiliate in Syria.

While the attacks in Paris have underscored the threats connected to Islamic extremists, Stoltenberg said allies must continue to keep an eye on its eastern flank. In eastern Ukraine, there has been a recent spike in violence between pro-Russian separatists and Ukrainian government forces.

Stoltenberg called on rebels to pull back heavy weapons and abide by a fragile cease fire agreement.

“This of course is of great concern,” he said.