Ethnicity of new US commander in Kosovo stirs controversy among rival Serbs, Albanians Buy Photo
2nd Lt. Adam Martin of Fort Carson, Colo., a liaison officer with NATO's Kosovo Force, stands in front of the unit's guard post at Camp Bondsteel on Thursday, March 22, 2018. The 19-year mission has assumed greater prominence since a series of incidents between bitter rivals Serbs and Albanians. (Slobodan Lekic/Stars and Stripes)

Buy Photo
2nd Lt. Adam Martin of Fort Carson, Colo., a liaison officer with NATO's Kosovo Force, stands in front of the unit's guard post at Camp Bondsteel on Thursday, March 22, 2018. The 19-year mission has assumed greater prominence since a series of incidents between bitter rivals Serbs and Albanians. (Slobodan Lekic/Stars and Stripes) 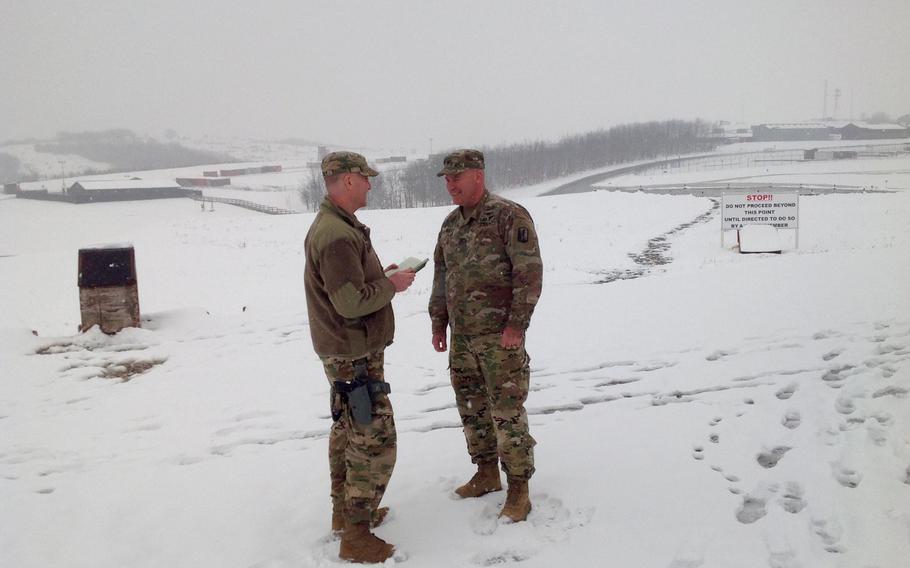 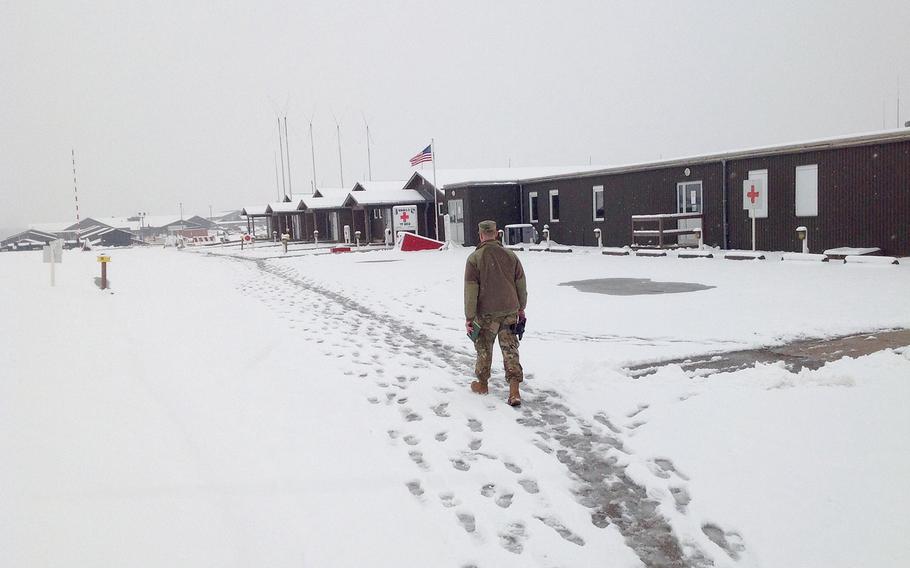 Buy Photo
A U.S. soldier walks past the medical clinic at Camp Bondsteel in Kosovo on Thursday, March 22, 2018. Built after the 1999 Kosovo war, the austere base still has a makeshift feel. Built to house 7,000 troops, its population now is a fraction of that number. (Slobodan Lekic/Stars and Stripes) Buy Photo
NATO's Kosovo Force, or KFOR currently numbers just over 4,000 troops from 28 countries. The U.S. contingent is the largest with 685 troops, according to a NATO factsheet. (Slobodan Lekic/Stars and Stripes) 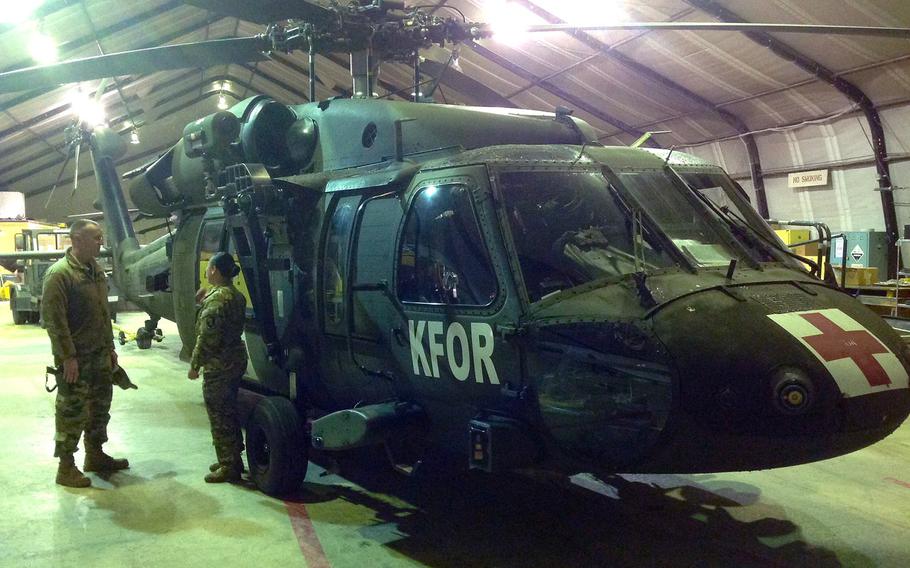 Buy Photo
The U.S. contingent at Camp Bondsteel, the largest in NATO's Kosovo Force, has three HH-60 Black Hawk helicopters at its disposal. The choppers are used for medical evacuations and other duties throughout Kosovo. (Slobodan Lekic/Stars and Stripes) 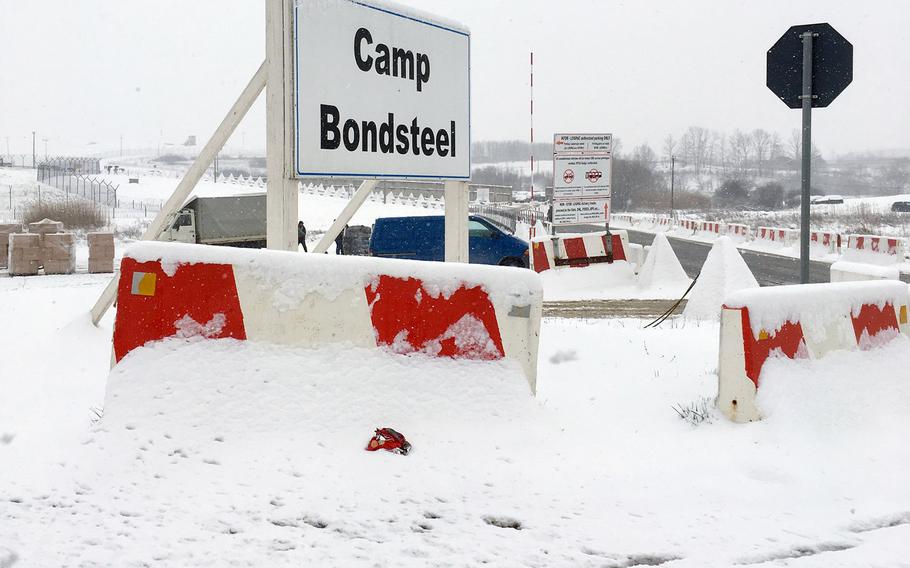 Buy Photo
Entrance to Camp Bondsteel, headquarters of NATO's U.S.-led Multinational Battle Group-East. The sprawling facility, named after a Medal of Honor recipient from the Vietnam War, was hit by a spring snow storm on Thursday, March 22, 2018. (Slobodan Lekic/Stars and Stripes) The number of troops each country contributes to NATO's KFOR mission in Kosovo. (Courtesy of NATO)

CAMP BONDSTEEL, Kosovo — When U.S. Army Col. Nick Ducich assumed command of NATO’s “forgotten brigade” in Kosovo this month he found himself at the center of one of Europe’s most intransigent ethnic conflicts, and all because of his name.

There was angst among the Kosovo's ethnic Albanian majority that the appointment of Ducich, a Serbian-American, was a signal that Washington wanted Kosovo to compromise more in its EU-sponsored reconciliation talks with Serbia, which governed here until the 1999 U.S.-led bombing campaign. Meanwhile, Serbia’s vehemently nationalist media published a series of inflammatory reports claiming he would “return Kosovo to Serbia.”

At a time of increased Russian meddling in the region, the long-running NATO peacekeeping effort in Kosovo has taken on added strategic significance with tensions between the Serbs and Albanians again on the rise.

Ducich, whose grandparents immigrated to America a century ago, dismissed the claims swirling on social media that his arrival was any sign of a hidden agenda.

“I think KFOR has stood for everyone,” he said, referring to the 28-nation NATO’s Kosovo Force mission. “One of the main principles of KFOR is its impartiality.”

“I’m the first American officer of Serbian origin to command Multinational Battle Group-East,” said the 30-year veteran of the California National Guard. “I am privileged to be serving here and devote my utmost commitment for a safe and secure environment for all people of Kosovo.”

But the ethnically charged atmosphere is one reason why the Balkans is an area of growing concern for NATO. The top military commander has identified it as one of his key concerns right now.

“The area I am concerned about today is the Balkans, actually,” U.S. European Command’s Gen. Curtis M. Scaparrotti told Congress earlier this month. “Russia is at work in the Balkans and we have kind of taken our eye off the area.”

Ducich’s 79th Infantry Brigade Combat Team out of California has arrived at a time when the 19-year impasse over Kosovo threatens to shift from frozen conflict into one with the potential to destabilize the broader region.

Russia recently became involved by loudly criticizing NATO and championing Serbian claims to Kosovo, while most Western states have recognized the independence of the ethnic Albanian-dominated region.

Some analysts say Moscow’s move is a ploy to subvert efforts by Washington and Brussels to eventually integrate both Serbia and Kosovo into the European Union.

On Monday, Kosovo riot police fired tear gas and stun grenades to disperse Serbian protesters after they had expelled a senior Serbian government official from a divided northern town. The incident triggered an angry reaction from Belgrade and further inflamed tensions between the two bitter Balkan foes.

Ducich took over on March 20 from Col. Michael Spraggins and his 39th Infantry Brigade Combat Team of the Arkansas National Guard. It was the 24th, nine-month rotation since KFOR was established in 1999. The mission is the longest in the Western military alliance’s 69-year history.

Multinational Battle Group-East is one of the two battle groups serving in KFOR. About 680 Americans make up the largest single national contingent in the force, according to KFOR’s latest fact sheet. Each battle group numbers about 1,000 troops.

Kosovo, whose population is 90 percent ethnic Albanian, was an autonomous unit in the old Yugoslav federation. But when former Serbian strongman Slobodan Milosevic seized power in 1988, he quickly moved to reintegrate Kosovo into Serbia and imposed martial law in the impoverished province.

In 1999, NATO intervened after a series of atrocities by Serbian forces against the Albanian population. Following a 78-day bombing campaign, Milosevic caved in and pulled his forces out of Kosovo, leaving NATO in control. In 2008, Kosovo’s government unilaterally declared independence from Serbia, which strongly opposes the move and still considers Kosovo as part of its territory.

Camp Bondsteel, named after Medal of Honor recipient Staff Sgt. James Bondsteel, was originally constructed to house about 7,000 troops and was one of the biggest bases built by the U.S. military since the Vietnam War. But after the 9/11 attacks and the invasions of Afghanistan and Iraq, its American population quickly dwindled.

Built hurriedly after the 1999 war, the austere base still has a makeshift feel, consisting mainly of wooden single-story buildings connected by long walkways and empty roads. During a visit last week, the sprawling facility — located near Kosovo’s eastern border with Serbia and its southern border with Macedonia — was snow-bound after a freak spring storm.

At NATO’s headquarters in Brussels, KFOR was for years jokingly referred to as the “Forgotten Brigade.” In recent years, some alliance members have even sought to disband it and have its troops transferred to more critical missions, such as the ongoing war in Afghanistan.

Even some of the servicemembers serving in the latest deployment acknowledged they were surprised to find out that the U.S. military still had a mission in Kosovo. Several servicemembers interviewed during a recent visit noted that they were schoolchildren when the deployments to Kosovo first started.

Second Lt. Adam Martin, from the 3rd Squadron, 61st Cavalry Regiment based at Fort Carson, Colo., said he was surprised to find out that he was being sent to the mission.

“I didn’t even know we were in Kosovo,” said the 28-year-old from Detroit, adding that when his orders came through he and his wife had to search on the map and the internet to see to where he was being deployed.

But Martin said he was now enjoying Kosovo, which reminded him of Colorado. “And the locals are extremely friendly, always smiling and waving when they see us.”