Ethnic tensions escalating in Bosnia, where US troops once kept the peace 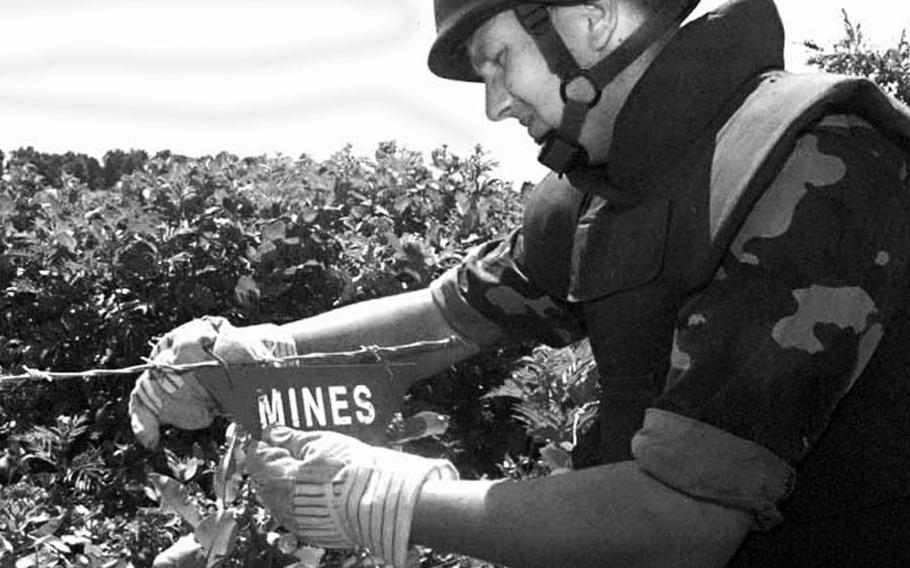 Buy Photo
Pvt. Ilija Mamic, a Bosnian soldier, hangs a metal mine awareness sign on an area designated as a mine field off Route Arizona in Bosnia and Herzegovina following the arrival of NATO peacekeepers in 1996. (Stars and Stripes)

Bosnia, where thousands of Americans kept the peace after a three-year war, is again facing an ethnic crisis, threatening the U.S.-brokered agreement that ended Europe’s bloodiest conflict since World War II.

Over the past year, the leader of the Bosnian Serb entity, Milorad Dodik, has repeatedly questioned the need to keep Bosnia united under the formula established in the 1995 Dayton Agreement.

The agreement established a self-governing entity for Bosnian Serbs, who make up about a third of the 4.3 million people in Bosnia, and another entity dominated by Muslims and Croats and a weak central government in Sarajevo.

Some analysts believe Dodik could be preparing for a referendum on independence for the Serb entity — known as Republika Srpska — a move the country’s Croat and Muslim groups would strongly oppose.

Dodik denies any plans for a referendum this year but has added “unless things are speeded up by events.”

Suspicions about Dodik’s intentions rose last September when he rejected a ruling by the country’s Constitutional Court, declaring that the Bosnian Serb entity’s Jan. 9 “Statehood Day” celebrations were illegal. The Bosnian Serbs declared independence and launched the war on Jan. 9, 1992.

Many of their leaders were later found guilty of war crimes by the international tribunal in The Hague. The Serb wartime president, Radovan Karadzic, was recently sentenced to 40 years in jail.

Despite the high court ruling, Bosnian Serbs went ahead with the ceremony Jan. 9 in their capital, Banja Luka, which featured an ethnic Serb unit of the Bosnian national army marching in the official parade in defiance of the central government.

Before the parade, NATO, whose forces secured the country after the 1992-95 war, had warned the Bosnian Serbs not to misuse the armed forces, one of the few joint institutions in the highly decentralized country.

The decision to include the regiment in the ceremonies drew a sharp reaction from the NATO commander in Bosnia, U.S. Brig. Gen. Gizelle M. Wilz, who called for an investigation into the unit’s participation.

“When there is the possibility of a breach of defense legislation, (Bosnian) institutions have a responsibility to all citizens to conduct an investigation, determine the facts and take appropriate action,” Wilz said in a statement Wednesday. “I hope that the political leaders will encourage and assist the appropriate institutions to do their job.”

Dodik imediately brushed off the NATO statement, saying the alliance was meddling in Bosnia’s domestic affairs.

The U.S. Embassy in Bosnia joined the criticism, saying it took “any threat to the security and stability” in Bosnia “very seriously.” The U.S. statement added that those who violated the law “must be held accountable.”

When the international official responsible for implementing the Dayton accords joined in the criticism, Dodik called him “an invented political figure” and refused to deal with him.

The rising tension between the Serbs and the two other communities has cast a shadow over what had been a major achievement for NATO and former President Bill Clinton’s administration.

The Dayton agreement, negotiated at Wright-Patterson Air Force base, ended a war that claimed more than 100,000 lives and boosted NATO’s credentials as a force for stability in Europe following the end of the Cold War and the breakup of the Soviet Bloc.

Nearly 60,000 NATO troops, half of them Americans, were deployed to Bosnia as peacekeepers. After about a decade, the NATO force was pared down and responsibility eventually passed to the European Union.