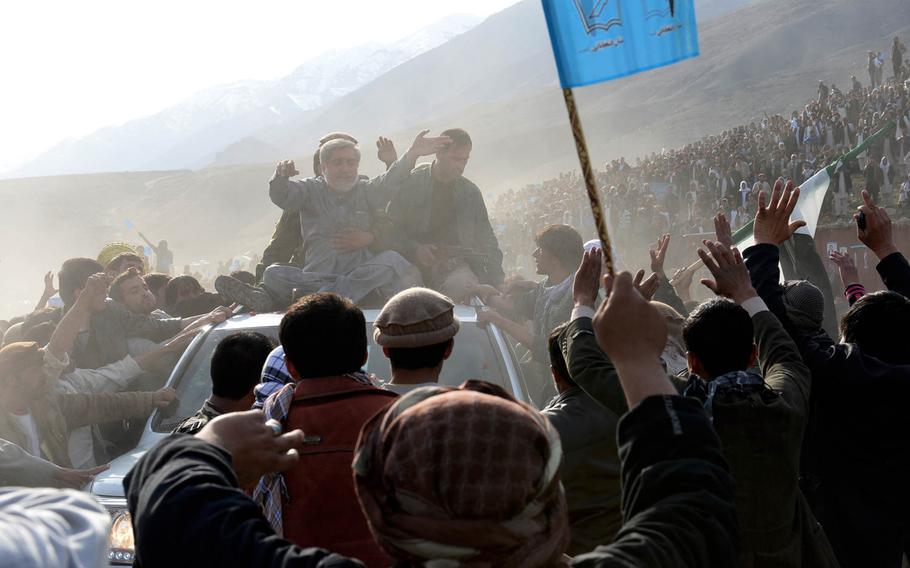 Afghan presidential candidate Abdullah Abdullah greets supporters at a rally in Panjshir province. While he has faced accusations of playing up ethnic divides, Abdullah says ethnicity is fading as an issue in Afghan politics. (Josh Smith/Stars and Stripes)

Afghan presidential candidate Abdullah Abdullah greets supporters at a rally in Panjshir province. While he has faced accusations of playing up ethnic divides, Abdullah says ethnicity is fading as an issue in Afghan politics. (Josh Smith/Stars and Stripes) 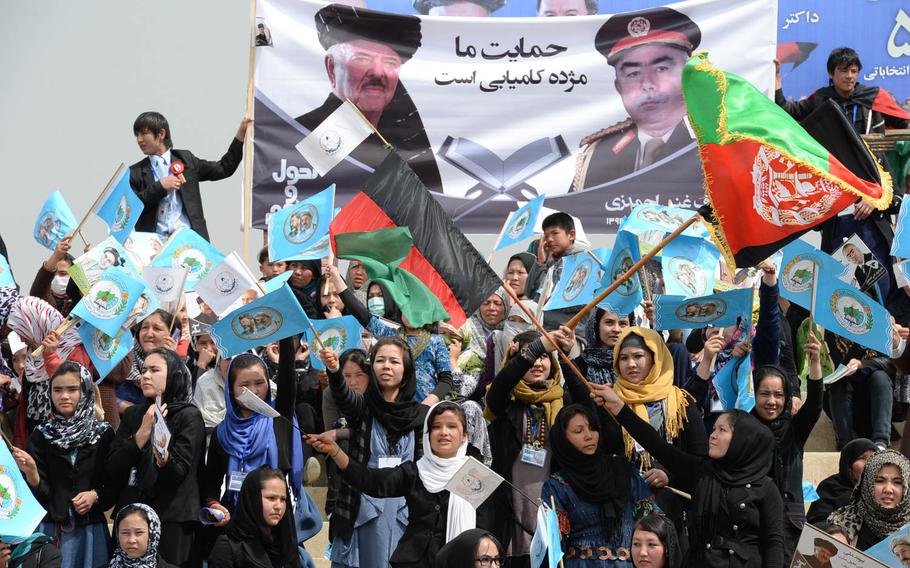 Women wave flags and banners at a rally for Afghan presidential candidate Ashraf Ghani in Kabul. Afghans, especially youth, say they hope the country is moving away from the ethnic divisions that have marked politics in the past. (Josh Smith/Stars and Stripes) 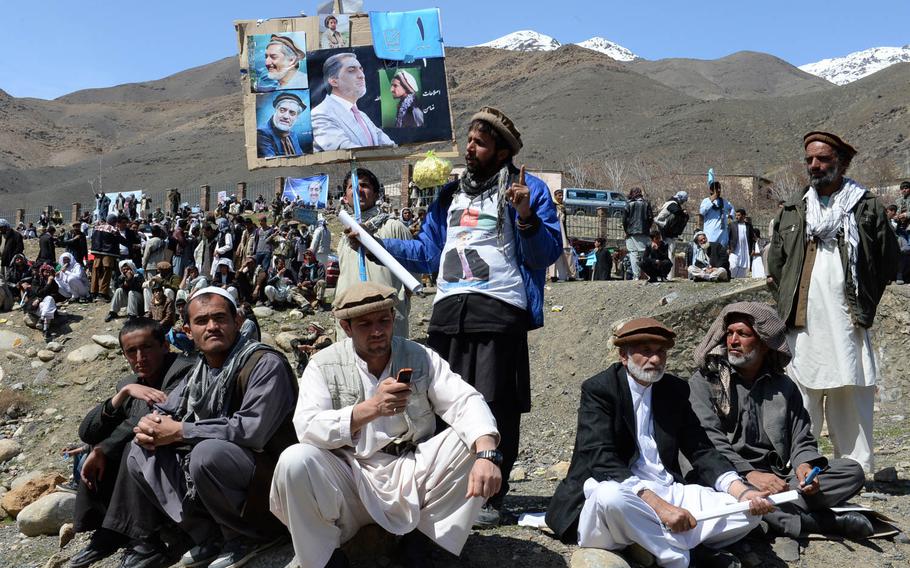 Supporters of Afghan presidential candidate Abdullah Abdullah wait for his arrival at a rally in Panjshir Valley. The candidate found a warm welcome in the area, where he has a strong base of support. (Josh Smith/Stars and Stripes)

KABUL — When the convoy of armored SUVs carrying Afghan presidential candidate Abdullah Abdullah wheeled around the corner, the crowd of supporters surged forward, heedless of the police officers and militia trying to beat them back.

Perched on top of his vehicle, surrounded by guards in traditional pakol felt hats, Abdullah waved to the crowd that had been waiting more than four hours for his arrival at a rally in the Panjshir Valley, surrounded by snow-capped peaks.

The Panjshir is Abdullah’s adopted home, and his history fighting the Soviets in the famous valley sealed his acceptance among the mostly Tajik population.

There was a time when an Afghan leader might have used a gathering such as this to openly appeal to ethnic or tribal loyalties. But less so in this election.

Analysts say, while ethnic identities remain entrenched, all the main candidates have formed multi-ethnic coalitions, making ethnic-based rhetoric less useful to national politicians than in the past.

“Particularly when you’ve had a war where militia leaders have used ethnicity to drum up support, you’ve got a hangover in Afghanistan of ethnic-based political organization,” said Kate Clark, who heads the Kabul office of the Afghanistan Analysts Network. “The difference this time is every ticket is cross-ethnic. You can’t get into office without having other ethnic groups onboard.”

Ethnicity is an “inevitable” factor in Afghan politics, she said, but the makeup of the presidential campaigns indicates Afghans aren’t looking to be divided again.

Saturday’s ballot comes at a critical time for Afghanistan. International combat troops are planning to leave by the end of the year after 12 years of war, and the election itself would mark the first peaceful, democratic transfer of power in Afghanistan’s history.

With so much on the line, concerns about traditional fault lines like ethnicity hang over the election. All of the major presidential candidates — and most of the Taliban — hail from the majority Pashtun heritage, though most of the candidates have running mates from other ethnic groups. Afghans and observers alike say ethnicity as a defining source of division in national elections has faded somewhat. Many hope for good.

Pashtuns make up 42 percent of Afghanistan’s 31 million people, while Tajiks account for 27 percent, according to the CIA World Factbook. Hazaras and Uzbeks account for nine percent each, with other groups comprising the rest.

Ethnicity is more of an issue in Afghanistan than it even was in Iraq, where fighting between rival Muslim sects was often described as ethnic-based. In Afghanistan, many Pashtuns in the south and Dari-speaking Tajiks in the north can’t even speak the other language. Other Afghan languages, such as Uzbek and Turkic are even less widely understood.

Abdullah claims to be half Tajik and half Pashtun. Abdullah’s main rival, Ashraf Ghani, is a Pashtun who has as a running mate General Abdul Rashid Dostum, a powerful Uzbek ruler accused of war crimes.

“All of the teams that are running represent multi-ethnic, multi-factional coalitions,” said Graeme Smith, a senior analyst with the International Crisis Group in Kabul. “So even though you have this incredibly centralized presidency, with very much a winner takes all system, no one faction in the country is trying to take all. Which is great because the way the system is designed you could have had a situation where some Tajik candidate tries to win the presidency for the Tajiks, and that’s just not happening.”

While some in Afghanistan may still seek to use ethnicity as a wedge issue, Abdullah says he doubts that such people can once again cause major divisions.

“Among the people, there is a change, there is a generational change,” he told Stars and Stripes in an interview at his compound in Panjshir. “They see the interests of the country and their own future above these divisions, so there are positive changes.”

The sitting president, Hamid Karzai, a Pashtun, who defeated Abdullah in a disputed election in 2009, has accused him of trying to bring Tajiks to power. While open ethnic appeals may not be common, some portions of candidates’ platforms are still interpreted through the lens of ethnicity.

Israr Karimzai, an Afghan youth activist, argued that candidates, including Abdullah, who have advocated for more autonomy for Afghan provinces are playing “the ethnic card.”

“The new generation doesn’t buy that anymore,” he told Stripes. “Our elders are divided, but the youth are more united. There are certain candidates that are playing the ethnic card in this election, but Afghans have been through the process of national solidarity and they are aware of national interest.”

Homegrown mass media and national sports like soccer and cricket are among the things that have helped to build a sense of national unity, Karimzai said.

Jandad Spinghar, director of the Free and Fair Election Forum of Afghanistan, the main independent Afghan election monitoring organization, says while ethnic issues have faded, especially compared to the past, they haven’t disappeared altogether.

A real test will come if, as many expect, the election results are disputed. “It’s, unfortunately, a reality in this country,” Spinghar said. “Politicians are trying to use that.”

And with foreign combat troops departing, the balance of power that has existed for the past decade could be shaken, Smith of the International Crisis Group warned.

“The sad reality is that over the past dozen years, the international military forces have picked sides in many of these fights,” he said. “So our presence changed the power dynamic in a lot of these places.”

When invading American forces empowered Uzbek militias in northern Afghanistan to fight against the Taliban, for example, whole villages of Pashtuns moved away.

“That’s unfinished business,” Smith observed. “You can’t expect that pendulum to swing one way and not swing back. I think there are some scores to settle here. I think this is why we really need to work at propping up the state because there could be serious problems if we don’t.”