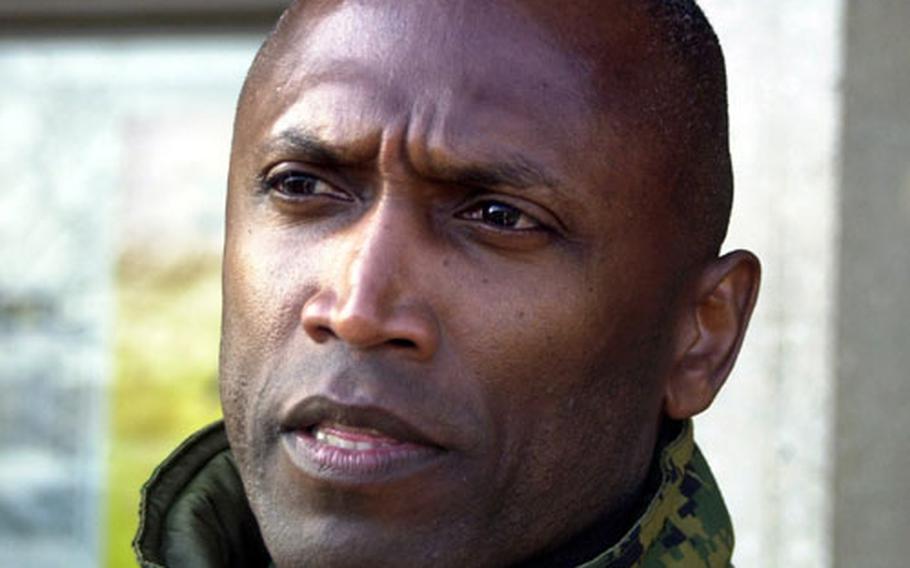 IWAKUNI MARINE CORPS AIR STATION, Japan &#8212; The sergeant major of the Marine Corps said Friday that Marines must continue to enhance their &#8220;nation-building&#8221; skills, as troops are charged with doing in Iraq.

Sgt. Maj. John Estrada, visiting Marines in Japan, said the Marine Corps is traditionally an &#8220;offensive force that projects sustained combat power. But if the world continues to change, we&#8217;ll have to continue to modify.&#8221;

He said the nation-building mission in Iraq originally concerned the Marines &#8220;because we are not trained to do that.&#8221;

During brief remarks, Estrada told a group of several hundred Marines gathered in the base&#8217;s Sakura Theater that Iraqis appreciated the Marines going back to Iraq.

He also said that senior Pentagon leaders are grateful for the support of those who are not deployed to Iraq.

&#8220;I talk a lot about war fighting as I go around, and that&#8217;s the number one focus for all Marines," he said. &#8220;We could concentrate on that quite a bit, because everything that supports war fighting is going very well in the Marine Corps.&#8221;

Despite the possibility of some Unit Deployment Program Marines from Okinawa deploying to Iraq, Estrada said the Marines&#8217; readiness for their mission in the Pacific will not be jeopardized.

&#8220;Not at all. We are still doing the same thing with different units,&#8221; he explained. &#8220;Obviously, the Marines that are going to Iraq are being trained for their new mission, and those that are coming this way will continue to come and operate in this area, so there will be no impact at all.&#8221;

He said the Marine Corps is not stretched too thin.

During his weeklong Japan tour Estrada spent most of Wednesday with Japan Ground Self-Defense Force officials at the Japan Ground Staff Office headquarters. Thursday he visited U.S. Forces Japan officials at Yokota Air Base and Marines at Camp Fuji.

Estrada joined the Marines in 1973 and became the 15th Sergeant Major of the Marine Corps in June 2003. Before that, he was the top enlisted man in the 3rd Marine Air Wing at Miramar Marine Corps Air Station, and served in Kuwait and Iraq with Miramar-based Marines. As the fighting subsided in Iraq, Estrada was selected for his current post.

His primary role as top enlistee is to advise Gen. Michael Hagee, Marine Corps Commandant, on enlisted issues such as pay, morale and family support services.