Essex, Harpers Ferry back in Sasebo after Cobra Gold exercise

USS Essex sailors survey the crowd on the pier as they wait for the ship to finish docking Tuesday, after being deployed for about six weeks. (Juliana Gittler / S&S)

USS Essex sailors survey the crowd on the pier as they wait for the ship to finish docking Tuesday, after being deployed for about six weeks. (Juliana Gittler / S&S) 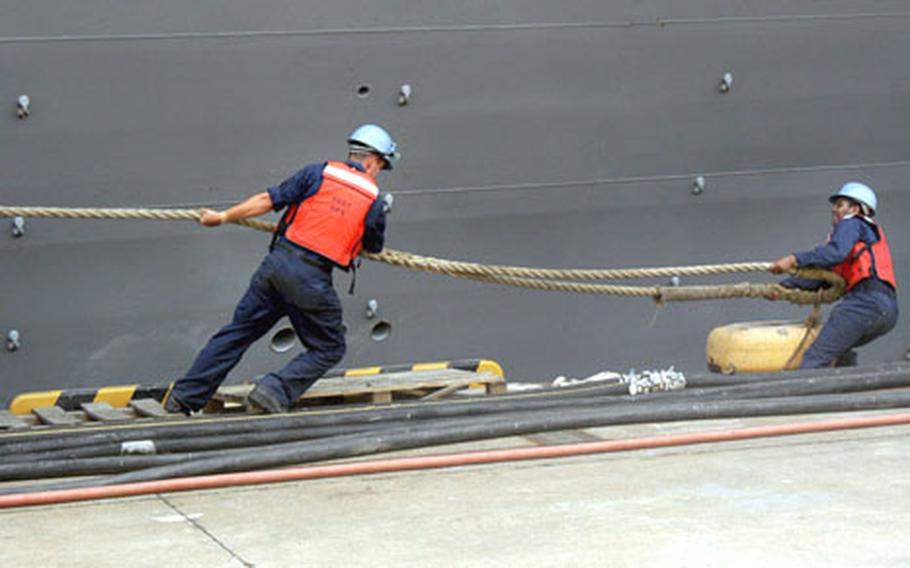 Sailors struggle with a line to help moor the USS Essex. The ship requires more than a dozen lines to keep it moored. (Juliana Gittler / S&S)

SASEBO NAVAL BASE, Japan &#8212; After about six weeks away, the USS Essex and USS Harpers Ferry returned to Sasebo on Tuesday.

Those ships and the USS Juneau, which returned earlier this month, participated in the multilateral exercise Cobra Gold in Thailand. On their return, the Essex and Harpers Ferry paused to offer help with relief efforts after a deadly earthquake struck Indonesia on May 27. But the ships weren&#8217;t called upon, so they continued back, a welcome relief for many sailors.

&#8220;We wanted to get home,&#8221; said Seaman Paul Shamonsky, with the Essex deck department. Although, Seaman Zach Bronum added, the sailors would have been happy to help if they were needed.

Still, their deployment left them a chance to experience Thailand, Bronum&#8217;s first visit and Shamonsky&#8217;s third.

But it wasn&#8217;t all work and no play: Sailors also enjoyed some time shopping and hanging out on a beach.

For the ships&#8217; crews, getting home was definitely one of the highlights of the cruise.

Shamonsky wasn&#8217;t so lucky, spending his first day pierside working on the ship.

The ships will complete inspections before a round of summer repairs and renovations.