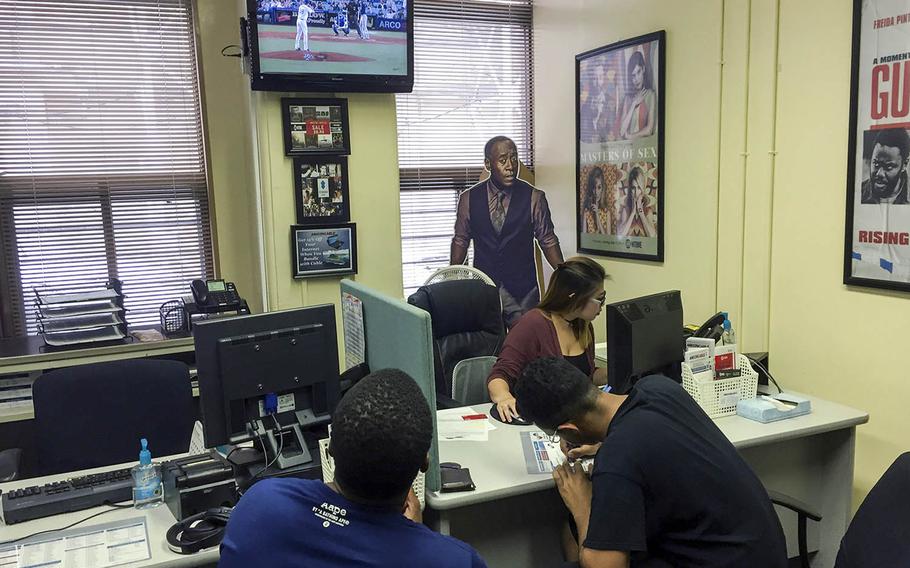 Sailors sign up for cable television service while ESPN plays overhead at an Americable office at Yokosuka Naval Base, Japan, Thursday, Sept. 28, 2017. (Tyler Hlavac/Stars and Stripes)

YOKOSUKA NAVAL BASE, Japan — ESPN’s days are numbered at some U.S. military bases in Japan, although shows such as “SportsCenter” will remain available on American Forces Network.

Americable has secured a replacement deal with Fox Sports, company president James Smith II told Stars and Stripes on Thursday. ESPN will continue to provide content to AFN, he added.

Issues with distribution rights sparked ESPN to end an agreement struck in 2013 that allowed Americable to air the channels, the company told its subscribers.

“ESPN is one of the most important channels any cable provider can have,” Smith said. “They’re probably the No. 1 most-watched channel.”

Smith said ESPN representatives told him the network didn’t have the rights to distribute content obtained through agreements with sports organizations to overseas viewers.

However, Smith said he suspects personnel changes at the network played a role in the decision.

When he tried to renew the deal, Smith said he found his previous ESPN contact had been replaced and that new representatives were less receptive to working with him.

“When it came time to renew, they were kind of hedging and weren’t sure … they said their legal team was re-evaluating everything,” he said. “ESPN’s lawyers finally came back and said, ‘Nope, not gonna do it.”

ESPN Spokesman Paul Melvin said the network will look for other ways to service the American military community in Japan.

“Our rights clearance no longer allow the distribution of the full networks to US military bases in Japan,” Melvin told Stars and Stripes in an email on Friday. “However, we are very proud of our long relationship supporting the Armed Forces and continue to serve military personnel with sports content through our relationship with the Armed Forces Television and Radio and will continue to look for ways to serve them further.”

Smith said he sometimes has issues negotiating deals with television networks that are unsure whether to classify U.S. military bases in Japan as American territory.

Smith added that his company is small compared to those in the U.S., and that some networks don’t want to bother sorting the legal details for so few customers.

“I guess it’s just not enough money for them”, he said.

“My chain of command will be kind of disappointed,” he said. “There’s a lot of people who really like sports out here.”

Smith said ESPN gives him a connection back to the states.

“For me ESPN is like being at home,” he said. “When I can watch ESPN here then that’s like being home for me.”

ESPN is also missing from the lineup at other overseas locations. In the Kaiserslautern Military Community in Germany, which includes about 50,000 U.S. personnel and family members, ESPN isn’t offered through base cable provider TKS. However, limited ESPN programming is available through AFN and satellite providers.

Stars and Stripes reporter Gregory Broome contributed to this report.