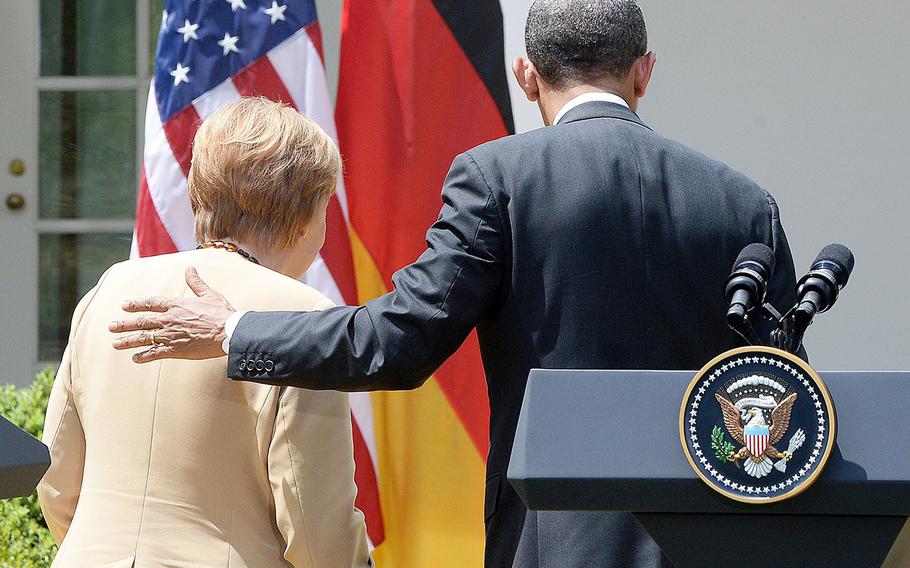 German Chancellor Angela Merkel and President Barack Obama leave the Rose Garden of the White House after speaking on Friday, May 2, 2014. (Olivier Douliery/MCT)

STUTTGART, Germany — The latest scandal over U.S. espionage in Germany could signal a permanent change in relations between Washington and Berlin, which have been contentious ever since the 2003 invasion of Iraq.

In the short term, allegations of a U.S. spying operation against a German parliamentary committee will complicate Washington’s efforts to win Berlin’s backing for tougher sanctions on Russia. But the larger political and military fallout is likely to be felt for years to come, experts say.

Widespread public outrage in Germany over U.S. spying, which erupted last summer with the revelation that the NSA had been tapping the cellphone of German Chancellor Angela Merkel, has fostered a growing sense of anti-Americanism in the country, Europe’s undisputed economic and political leader and home to the United States’ largest military contingent in Europe. Recent allegations that at least two Germans were spying for the U.S. have only served to fuel the unease.

For now, many experts agree it’s unlikely that the assorted spying allegations will cause serious disruption in how the two countries collaborate on sharing intelligence and other high-stakes anti-terrorism matters. However, other areas, such as persuading the Germans to back more severe sanctions on Russia for its role in Ukraine or to convince Berlin to take on a more muscular role in NATO, could suffer, experts say.

The Cold War-era image of the U.S. as the great protector has taken a hard hit in Germany. The consequences may not be fully realized for some time, but some experts say the special relationship between the two allies is facing a new political reality.

“Most important decision makers know the U.S. is a pillar in foreign and security policy,” said Sudha David-Wilp, an expert on trans-Atlantic relations at the George Marshall Fund in Berlin. “But at the same time, political leaders are in a Catch-22. They need to respond to popular sentiment, among young Germans especially.”

When Germany took the unprecedented step last week of expelling the U.S.’ local CIA station chief, it was an indication of Berlin’s willingness to take a tougher stand when it feels the Americans are crossing the line. Such actions, which reflect an anti-American sentiment that has taken deeper root over the past decade, were virtually inconceivable a generation ago.

The first signs of a German willingness to resist American policy surfaced in 2003, when Berlin opposed the U.S. invasion of Iraq. But that opposition had limits. It did not stop Berlin from allowing the U.S. military to use Germany as a staging ground for the war, with thousands of troops and military hardware transiting through the country. A generation from now, there are no guarantees such a scenario would play out the same way.

Despite base closings and personnel cuts in recent years, Germany still plays host to about 40,000 American troops and several major installations, including Ramstein Air Base, two combatant commands in Stuttgart and several Army facilities scattered around the country.

What does the new German sentiment mean for this vast military presence?

“I can hear noises about this being an anachronism,” Trenin said. “During the Cold War it was a very real protector against the Soviet Union. Today, there’s no real fear of Russia in Germany. I think eventually, 20 years from now, there are no more U.S. bases in Germany.”

Not all experts agree.

“I think the friendship is too strong for that,” said Silvia C. Petig of the German Council on Foreign Relations in Berlin. “There are too many ways the countries are bound together. Even for the people critical of America, there’s too much of a historical bond.”

But it’s difficult to calculate the long-term political consequences as Germany looks at the U.S. with greater skepticism, Petig said.

“I think politically the image of the United States is being damaged by this (spying scandal.) The general public is getting an impression that is not favorable,” said Petig.

Recent opinion polls in Germany reveal the country’s ambivalence toward the U.S. One survey by the Körber Foundation found that half of those queried would prefer forging closer ties with Russia rather than the U.S.

As the influential German magazine Der Speigel observed: “On the one hand, Germans are disappointed by the Americans and their unceasing surveillance activities. At the same time, they have demonstrated a surprising level of sympathy for the Russians and their president, Vladimir Putin, in the Ukraine crisis. This raises the fundamental question of Germany’s national identity. In the long run, Germans will have to decide which side they prefer.”

According to a poll by the magazine, 57 percent of Germans believe the country should be more independent of the U.S. in foreign policy.

Indeed, a new political generation is emerging whose thoughts about the U.S. have been shaped more by anger over the Iraq War, NSA surveillance and other spying scandals than the U.S.’ role in chaperoning Germany into democracy.

“If you think about what America has achieved in influencing Europe culturally after World War II, building up a positive image, many Germans thank America for all of that,” Petig said. “But over the past 14 years, people are a lot more critical.”

As Europe’s economic powerhouse settles into its leadership role on the Continent, the U.S. could face a more resistant ally in the years ahead when their interests diverge.

“Germany is not going to try to dominate Europe by force, but it certainly is going to assume a much bigger share of responsibility and it will need to learn the art and practice of leadership,” Trenin said. “Not everyone in Europe applauds the rise, not even everyone in Germany wants that. But I see the power of the German economy as really the force that demands a new role for the county.”