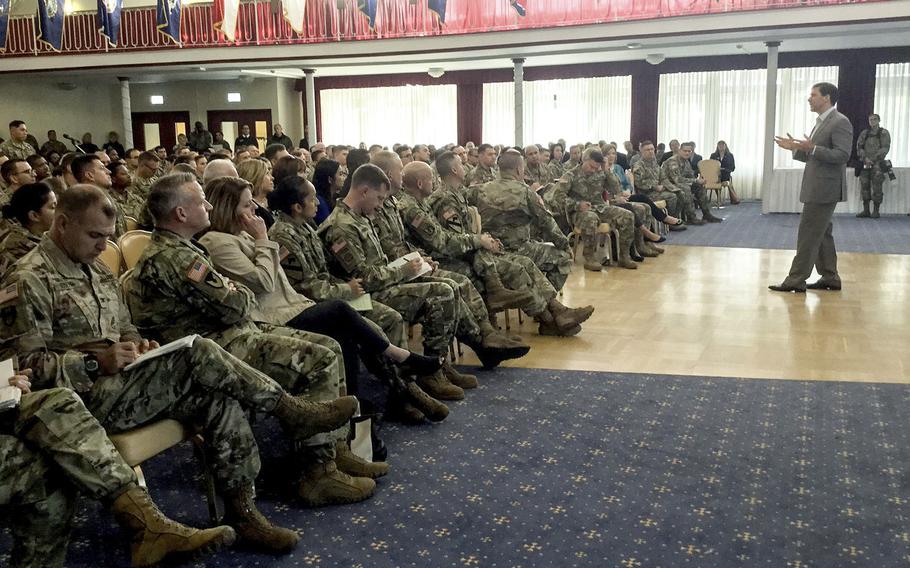 Buy Photo
Mark T. Esper, Secretary of the Army, speaks to soldiers during a town hall meeting in Kaiserslautern, Germany, Monday, Sept. 24, 2018. During his visit, Esper observed training and got feedback from soldiers, civilians, families and retirees. (Aaron Knowles/Stars and Stripes)

KAISERSLAUTERN, Germany – The Army is adding more personnel to its electronic warfare and air defense teams to keep up with emerging global threats, Army Secretary Mark Esper said following discussions with servicemembers and officials in Germany on Monday.

The Army’s transition comes at a time when it is reshaping its force to deal with potential threats from near-peer adversaries like Russia and away from counterinsurgency campaigns that have dominated recent U.S. warfare in Iraq and Afghanistan.

“There are some [capabilities] that need to be restored, such as air defense and electronic warfare, and there are some that need to be added, such as cyber, and we are in the process of doing all of those right now,” Esper said during an interview with Stars and Stripes. “We are looking at adding teams at the corps level. They are going to work cyber, electronic warfare and information warfare.”

Earlier this month, the Army announced it would create new short-range air defense and rocket artillery units, which would add about 1,500 soldiers to bases in Europe.

Esper met with base personnel during a public town hall meeting at Pulaski Barracks on Monday and will also be visiting units in Hohenfels, Germany, and Bulgaria during his visit to Europe.

While the Army wants to add capabilities, it will also concentrate on making sure units “are fully fleshed out,” Esper said.

The Army is also looking at ways to keep soldiers deployable, Esper said. That includes extended basic training for infantry from 14 to 22 weeks and putting specialists, such as dieticians and physical therapists, directly into maneuver battalions to prevent injury and sickness, he said.

Esper also plans on allowing longer tours before soldiers and their families must complete a permanent change of station, or PCS.

“I would like to slow the PCS churn if you will, by giving soldiers the option to stay in place if they decide,” Esper said. “The benefits it gives, we can cite a few, are that you can keep a team together longer. So, rather than a third of a unit cycling out every year, you might be able to keep teams longer.”

Details on which soldiers could stay longer and for how long haven’t been worked out yet. Esper said he wants to make sure longer tours don’t mean career stagnation.

“And I do think that we want an Army, we want (noncommissioned officers) and officers to have a broad-based experience of the Army, so we have to weigh all that out,” Esper said.