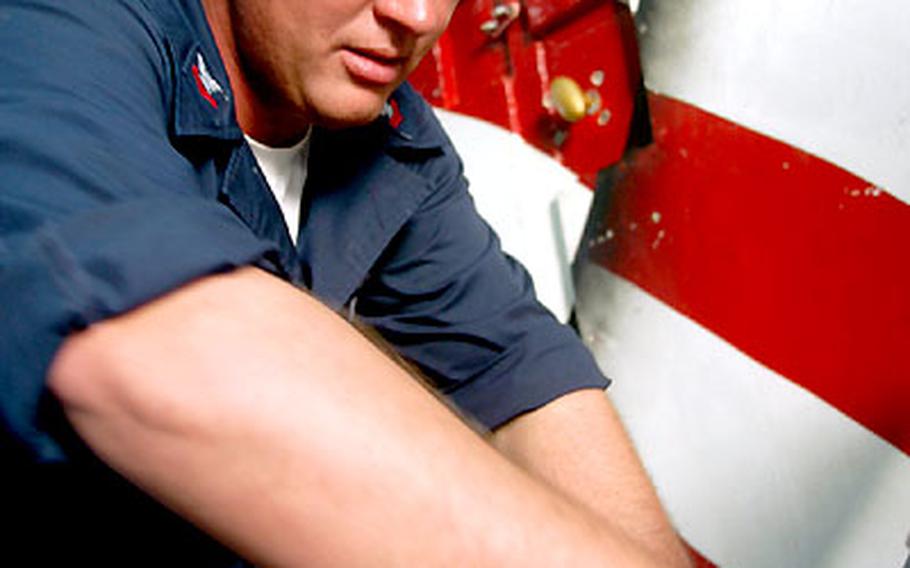 Petty Officer 2nd Class Martin Jones fixes a power control unit for a 25 mm gun on the USS Gary. Jones, 27, a gunner’s mate from Kokomo, Ind., and other sailors from the frigate boarded a stranded merchant ship in February. (Kendra Helmer / S&S)

Petty Officer 2nd Class Martin Jones fixes a power control unit for a 25 mm gun on the USS Gary. Jones, 27, a gunner’s mate from Kokomo, Ind., and other sailors from the frigate boarded a stranded merchant ship in February. (Kendra Helmer / S&S) 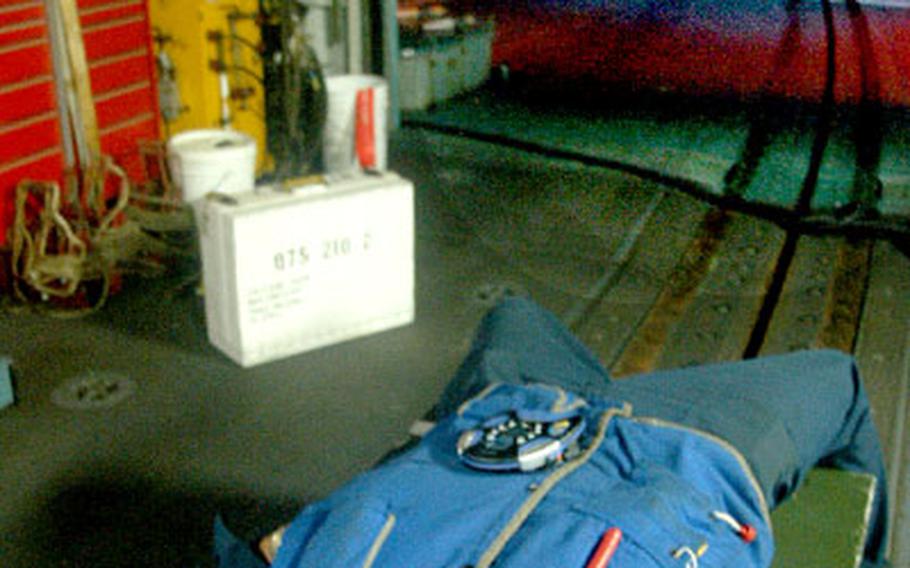 Seaman Zane Michels, 21, from York, Pa., listens to a techno CD while on standby for helicopter flights late at night. He alerts others if a copter will be taking off or landing from the flight deck just outside, and chains down the copters. During the day, he does deck work such as painting and cleaning. (Kendra Helmer / S&S) 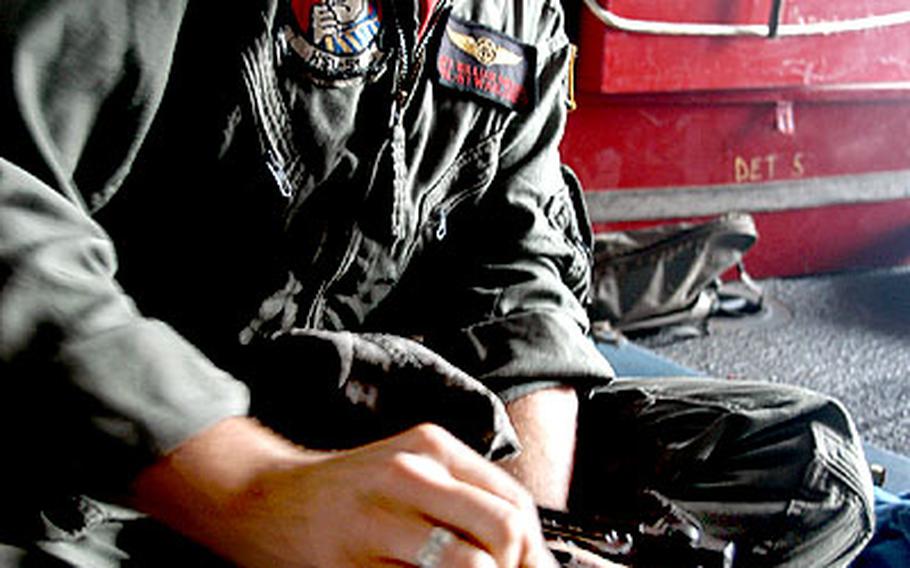 ABOARD THE USS GARY &#8212; The 250 sailors aboard the USS Gary had an eventful couple of months during escort duty, providing food to hungry sailors, repairing a stranded ship and rescuing fishermen from a sinking vessel.

When the war started, the frigate based in Japan provided air security over the USS Kitty Hawk. It was not the most exciting duty for the Gary sailors.

Sailors got their wish recently when the Gary headed to the southern Persian Gulf to resume escort duty. Several Gary sailors said they were looking forward to other such encounters. They lessen the monotony as the frigate stretches into its third month at sea.

On Feb. 23, a few miles off the coast of Eritrea, the Gary helped a merchant ship. Its 22 crewmembers, stranded for 15 days because of catastrophic engine failure, were out of food and fresh water.

A week later, the Gary aided a Danish merchant ship, Thor Falcon. Most of the bolts attaching its fuel-service pump to the main drive were shot.

The vessel was soon up and running again thanks to Petty Officer 2nd Class Joseph Bondoc, 38, a machinery repairman from Angeles City, Philippines. He worked 11 hours to make four new 6-by-1&#189;-inch bolts with irregular grooves, which are difficult to duplicate.

Then, on March 13, Gary sailors launched an inflatable boat into rough seas to rescue eight Iraqi fishermen from a sinking vessel.

Toward the end of March through early April, the frigate was tasked with plane guard over the Kitty Hawk, searching and identifying everything around the carrier, and keeping a close eye on helicopters flying from the several nearby oil platforms.

The Gary sailors said they&#8217;ve learned a lot from the variety of missions.

Several said they enjoy duty on the small boy because it has an environment in which they are respected and trusted to do their jobs and learn from their mistakes.

Dua&#8217;s philosophy was illustrated on a night when the Gary got too close to the carrier. The Kitty Hawk had indicated it was going to wait for the Gary to move. As the Gary proceeded, though, the carrier started turning.

The Gary crossed the massive carrier&#8217;s bow, coming within 2,000 yards of it. Some expletives and commands were shouted out on the darkened bridge, as sailors hurried to move away from the carrier.

A few minutes later, Dua appeared on the bridge. He&#8217;d just gotten a call from someone on the Kitty Hawk who wasn&#8217;t too happy about the frigate&#8217;s close proximity to the carrier.

Sailors appreciated the level-headed way the commander handled the situation. Had Dua stormed onto the bridge yelling about the incident, they said, it would have confused the situation.