Equipping Iraqi troops with gear to fight an enormous task 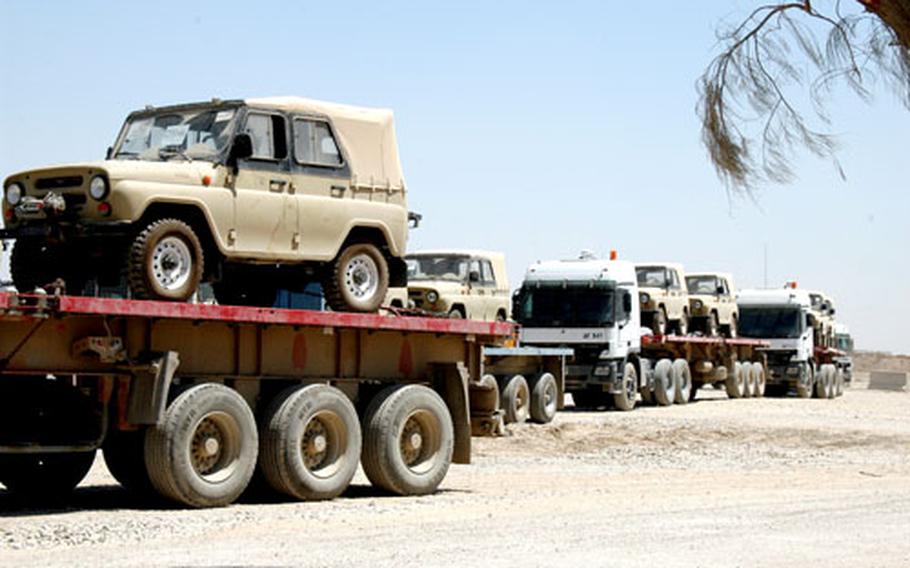 Thirty-four Russian-made jeeps arrived Monday morning at FOB Gabe, where a group of American soldiers are overseeing the operations and the supplies for an Iraqi brigade. The trucks are for the Iraqis, who will probably use them to drive around various camps under the brigade&#39;s control. (Teri Weaver / S&S)

Thirty-four Russian-made jeeps arrived Monday morning at FOB Gabe, where a group of American soldiers are overseeing the operations and the supplies for an Iraqi brigade. The trucks are for the Iraqis, who will probably use them to drive around various camps under the brigade&#39;s control. (Teri Weaver / S&S) Capt. Julius Boyd, 36, front right, helps Iraqi soldiers load 892 pairs of boots into a truck Monday. Boyd is the supply officer who oversees all the equipment requested by the Iraqi army’s 2nd Brigade within its 5th Division. (Teri Weaver / S&S)

BAQUBAH, Iraq &#8212; Capt. Julius Boyd is a supply officer for an impatient and under-equipped army.

Boyd, 36, of War, W.Va., is tasked with handing out the uniforms, guns, computers, night-vision goggles, trucks and the dozens of other pieces the Iraqi army needs. He&#8217;s trying to outfit an entire brigade, more than 3,500 soldiers, with enough gear to fight their own war.

Almost daily, a group of Iraqi soldiers comes with three or four trucks to pick up supplies at Gabe. The soldiers are from the 2nd Brigade of the 5th Division of the Iraqi army, and they live on an adjacent Iraqi base.

Each day, Boyd has his inventory list of serial numbers and quantities to track just how much is going next door. It&#8217;s a test to make sure the equipment &#8212; all paid for with U.S. money &#8212; goes to the right soldiers within the designated units, Boyd said. As a part of an advisory team helping the Iraqis train their army, Boyd tracks the shipments by paperwork, makes the Iraqi officers do the same, then compares the lists.

In all, $5.2 billion has been allotted for training and equipping Iraqi security forces.

On Monday, he gave out 892 pairs of boots, enough for one battalion, he hopes. He also gave out three computers, a printer, a copier, a fax machine, radios and field stretchers.

Shortly after 10 a.m., Boyd got a call on his radio that 66 jeeps for the Iraqi army were outside the base, waiting to be escorted in. The shipment of trucks wasn&#8217;t expected Monday, and Boyd had all he could handle handing out uniforms, Nike shoes and exercise outfits.

There were no Iraqi soldiers around to help with unloading, so members of the advisory team scrambled to drive the jeeps off the tractor-trailers, a slow process because half of the advisers were at an off-base meeting.

Later, Boyd went over to the Iraqi base because he was worried its brigade commander might not distribute the jeeps down to the smaller battalions. He also had to talk to the Iraqis about preparing their soldiers for the daily delivery.

Monday morning, the Iraqis were out in the heat and sun for hours, and no one had packed any water or food. They repeatedly asked the American soldiers for water, and were repeatedly told no. The scenario happens often, but the Americans want the Iraqis to learn to plan for themselves, Boyd said.

In the last two months, the Iraqi Ministry of Defense has begun paying for a small portion of its army&#8217;s needs, according to the advisory team at Camp Gabe. The ministry&#8217;s two main responsibilities right now are food and water.

But Boyd does worry about where it goes. He updates his records daily to show what he&#8217;s given out. He&#8217;s concerned that some soldiers might lose things, or that they might sell items on the black market.

Unless the gear is damaged during work, there are no replacements, he said.