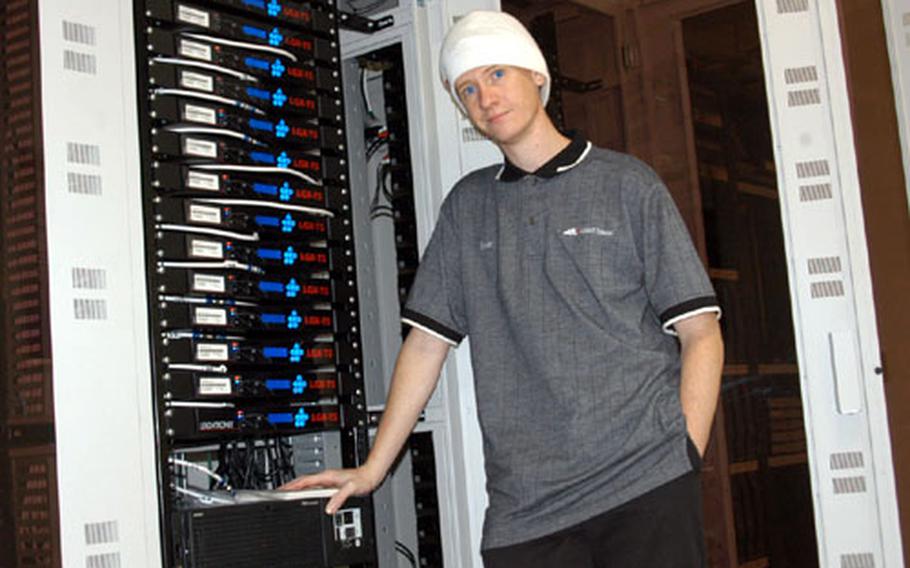 Tom Gann, an Allied Telesis network technician, works on installation of time-shift servers that will allow U.S. prime-time programming to be seen during evening hours at Yokota Air Base, Japan. The new service will be launched next week. (Vince Little / S&S)

YOKOTA AIR BASE, Japan &#8212; Yokota&#8217;s cable television provider is about to give infomercial pitchman Billy Mays the boot every night.

In a move anticipated for months, prime-time U.S. broadcasts on 33 channels will be shifted to evening hours starting Monday, Allied Telesis and AAFES announced. American Forces Network programming at the base won&#8217;t be affected, while sports and news channels also will remain real-time.

The sophisticated hardware and software brought in for the "time-shifting" acts as a computerized container, holding a show for nine hours before it&#8217;s rebroadcast. One is required for each channel.

"The time-shift servers work much like a very large TiVo," Keith Southard, chief executive officer of Allied Telesis Capital Corp. in San Jose, Calif., wrote in an e-mail to Stars and Stripes. "They take content in, store it on large hard drives, and then replay the content at the designated time &#8212; nine hours later in a continuous stream."

Due to the live feed Allied Telesis receives through a fiber-optic link in San Francisco, infomercials have plagued Yokota&#8217;s premium cable lineup in prime evening hours since the company began delivering video service in May 2007.

"Over the past year, we&#8217;ve worked closely with Allied Telesis to expand the channel lineup and enhance service levels &#8230; all with the goal of providing Yokota residents with a U.S. video experience."

While not required by the contract, time-shifting of prime-time U.S. programs was mentioned frequently in a customer satisfaction survey conducted by AAFES this past summer, according to the release.

"The expectation is that it will be operational within a week of having &#8216;time-shifting&#8217; online," he added. Other projects under way involve upgrades to the voice and data network aimed at shoring up service quality and reliability, he said. Allied also has invested in additional power protection and equipment for the base&#8217;s coaxial plant to reduce outages, boost signal strength and improve video quality.