In the foreground at the right is Staff Sgt. Luis Gonzalez, 25, of Queens, N.Y., as he and other troops provide security for high-level diplomats, military leaders and reporters taking a tour of a busy market in downtown Mosul. Gonzalez is a member of the 2nd Battalion, 7th Cavalry Regiment, 4th Brigade, 1st Cavalry Division. (Les Neuhaus / S&S)

In the foreground at the right is Staff Sgt. Luis Gonzalez, 25, of Queens, N.Y., as he and other troops provide security for high-level diplomats, military leaders and reporters taking a tour of a busy market in downtown Mosul. Gonzalez is a member of the 2nd Battalion, 7th Cavalry Regiment, 4th Brigade, 1st Cavalry Division. (Les Neuhaus / S&S) 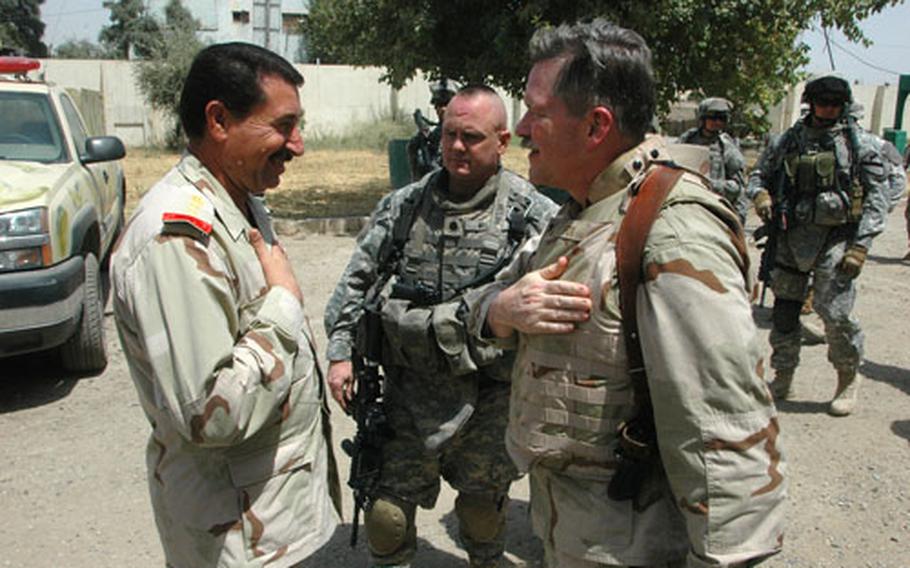 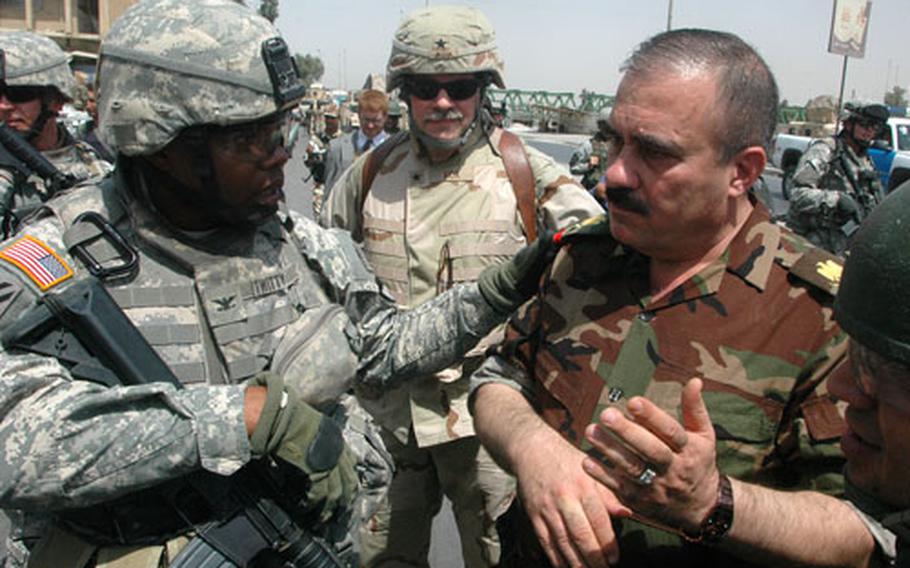 Iraqi Army Col. Taha Askar Mathlom, commander of the 2nd Brigade, 2nd Iraqi Army Division, is his offices during a press conference with high-level U.S. military leaders and diplomats. The commander said if he was given more support by the U.S., then his troops would be better prepared to assume full control of security duties near Mosul. (Les Neuhaus / S&S) MOSUL, Iraq &#8212; A deficiency in military equipment and air assets is hindering the ability of Iraqis to take over full security duties in Mosul, commanders from both sides said Thursday during a high-level visit by U.S. dignitaries.

Chief of Police Maj. Gen. Wathiq Mohammed Abd Alkhader, and Brig. Gen. Moutaa Habeeb Jassim &#8212; commander of the 2nd Iraqi Army Division &#8212; stressed they were low on vehicles, air support and technology to search for roadside bombs. Both men are based in Mosul, Iraq&#8217;s second-largest city.

Twitty said he understood their dilemma, but emphasized the area&#8217;s recent successes.

Twitty listed an array of weaponry and other systems that are due in and further said 75 al-Qaida operatives were either captured or killed in the province over the last few weeks.

He led diplomats, military leaders and reporters on a tour of a bustling market next to the Tigris River in downtown Mosul. The tour illustrated, he said, the economic boom under way due to the efforts of U.S. and Iraqi forces in recent months to purge the city of insurgents.

The admiral filled in at the last minute for Brig. Gen. Kevin Bergner, who is the top U.S. military spokesman in Iraq and was scheduled to lead the delegation. A side trip originally scheduled for the nearby city of Tal Afar was also canceled.

A twin-car bombing in Tal Afar on July 26 killed several policeman and injured 25 others.

On Thursday, Moutaa, the commander of the Iraqi army&#8217;s 2nd Division, announced a significant blow had been dealt to area insurgents when his forces killed Mosul&#8217;s &#8220;emir&#8221; of al-Qaida in Iraq during a shootout on Wednesday.

He said the raid was jointly carried out by Iraqi army and police forces in the pre-dawn assault.

Still, the area has a long way to go before the Iraqis will be able to take over on their own, and area commanders in recent days have stressed their reliance on the U.S. to get them through until they are prepared for the job, according to Twitty.

&#8220;In order for the security forces to be fully capable of taking over security for the long term, the central government &#8212; particularly the ministries of defense and interior &#8212; must develop more capacity, particularly in the area of logistics,&#8221; Twitty said. &#8220;This support is needed now to support the Army, police and border forces. There is much effort being done to try and solve this problem, but progress in my opinion, is too slow.&#8221;

The troops, from the 2nd Iraqi Army Division, killed three men who were identified as members of the Islamic State of Iraq organization, including its leader, known as Safi.

The shootout occurred during joint Iraq army and police operations in the city, officials said.

&#8220;The 2nd Iraqi Army Division headquarters element, including Brig. Gen. Moutaa, commander of the 2IA, were conducting cordon and search operations in northeast Mosul when Safi and two of his bodyguards were spotted in a pickup truck,&#8221; a news release issued by the U.S. military read.

Troops gave chase and pulled over the vehicle; when the occupants exited the truck, the militants began firing at the Iraqi soldiers, according to the U.S. military account.

&#8220;Moutaa and his security element returned fire, killing all three,&#8221; the release read.

&#8220;This is a great example of the cooperation between the Iraqi police (who provided the profile and made sure his picture was widely distributed and familiar) and the Iraqi army (who actually stopped Safi),&#8221; U.S. Army Col. Stephen Twitty, commander of 4th Brigade Combat Team, 1st Cavalry Division, was quoted as saying.