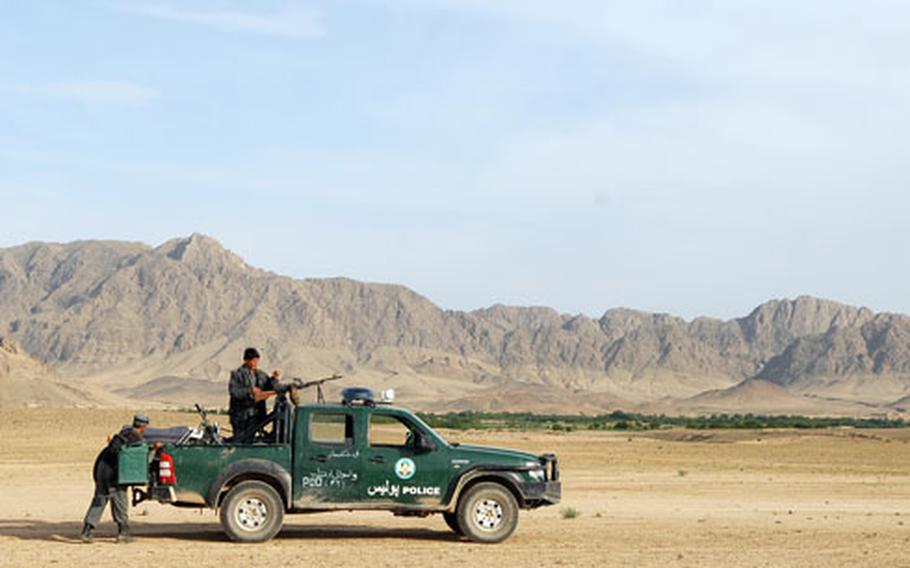 Afghan National Police load a motorcycle into the bed of a Ford Ranger patrol truck on Saturday in the Arghandab district of southern Afghanistan. The following day, the truck couldn’t be used because a wheel appeared to be coming off due to the rough terrain. (James Warden)

ARGHANDAB, Afghanistan — The American soldiers had a full day of patrolling ahead when they rolled into the Arghandab district’s police headquarters Sunday.

There was just one problem: The Afghans didn’t have any vehicles.

Just three of the department’s 14 Ford Ranger patrol trucks were working the day before. On Sunday, the lone truck remaining at their headquarters appeared to have a wheel coming off. The police ended up bumping through the desert in a captured Toyota Corolla that didn’t exactly belong to them.

“See how big of a deal these trucks are?” said Capt. Kenton Patrick, the leader of the area’s police mentoring team. “If we go out, it’s a major liability. We’re supposed to have our counterparts whenever we out.”

Equipment and fuel shortages among the Afghan security forces are a major stumbling block in their training, perhaps as much a factor as a shortage of American advisers.

Police in this district have been struggling to maintain enough working vehicles to allow them to keep up a steady stream of patrols from each of the 18 checkpoints they man.

Just two of the vehicles were damaged in combat. Four were loaned to another district while the police were at training and never returned. Most of the other vehicles simply fell victim to the area’s jagged terrain.

Roadside bombs are such a threat on the dirt road that connects the area’s checkpoints that both police and American advisers drive off road to avoid becoming a predictable target.

The rough roads take their toll on the American vehicles as well. One Humvee is taken in for maintenance every seven to 10 days. But the Afghans don’t have a logistics system that can repair the vehicles as promptly as the Americans.

“These are easy things that they should be able to resource through their logistics channels,” Patrick said. “I don’t know what the showstopper is.”

As with the Corolla, the police end up relying on captured cars and, frequently, motorcycles.

"We have a little, but not too much," summed up Haji Amir, a checkpoint commander.

Even if the police did have enough vehicles, they wouldn’t have enough fuel to patrol the expanses of desert that surround their checkpoints. Each vehicle is supposed to get 20 liters of fuel a day, or about five gallons. Instead, they’re getting about 100 liters of fuel a month — a sixth of their allotment. The entire district receives 1,000 to 1,500 liters a month.

With only two or three trucks running, that’s still tighter than it should be, but the situation would be especially critical if all the trucks were working. Meanwhile, the district police chief continues to limit the amount of fuel he gives to the checkpoints.

Checkpoint commanders frequently look to the American advisers for help. The few with vehicles ask the soldiers to top off their tanks whenever the Americans pass through.

“When we run joint operations together, I’m happy to toss you some fuel,” Patrick told one commander.

“But I&#8217;m not a rolling fuel station. We’re going to make this system work through the logistics channels and get this thing rolling.”

One checkpoint commander happily agreed to go on patrols in exchange for fuel.

The advisers are sympathetic, but press the Afghans to push for help from their own units. At the same time, they feed the complaints to higher-level advisers in order to apply pressure from above. Patrick calls provincial officials frequently to try to get the police the vehicles they need.

“Tha’s going to look bad for the general if he loses one of his districts,” he warned one official Sunday.

But the process has so far proved slow, and that could mean many more desert rides in captured Corollas for these National Police.